Over the past couple months, I’ve been out after lingcod and rockfish several times. Most years, I rely heavily on large natural baits for my lings and shrimp flies tipped with squid or Gulp! for rockfish. But alas every year is different and this season metal “bar” jigs have been working exceptionally well for me.

Using jigs, I’ve landed big numbers of lingcod and some huge rockfish. On one trip, I put together a legitimate 100 pound sack of lings and rocks…A feat almost unheard of in this day and age. 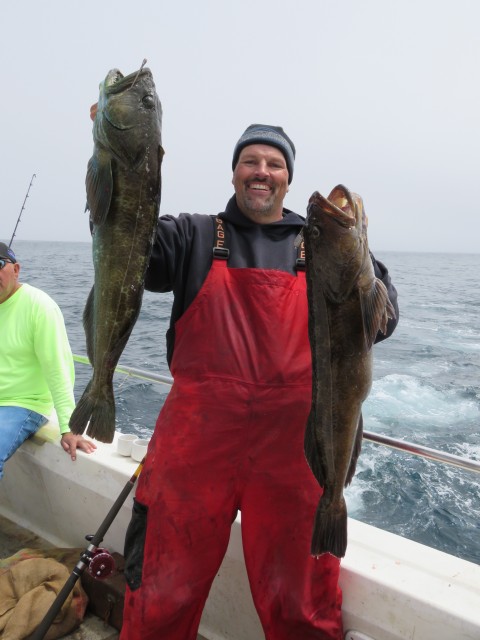 Growing up, jigging for lingcod with diamond bars and hex bars was pretty much the one and only accepted method for hooking these toothy predators. As a result, up until recently I assumed that most experienced charter boaters knew how to work with bars. Yet from the reactions I’ve gotten from fellow anglers that see me pulling in fish on my jigs, it’s clear that many modern day charter boaters have little understanding of how to jig, but when they see the results jigs can produce they are all interested in learning the ropes.

If you fall into this category, continue reading, because I’m about to unroll a basic guide for jigging bottom fish with bar jigs!

Of course, I’m tempted to start this discussion with the jigs themselves. Which ones are better? Which ones are best? Does color matter? What factor does jig weight play? Yet when it comes to jigging, the tackle used is actually more critical than the jigs themselves because without proper gear, you won’t be able to make an effective presentation.

Let’s begin with rods…I am currently using an 8’ Seeker Stealth series jig stick that is rated for 25 to 40 pound test line. The rod sports a fast action and features a ton of backbone. While it has ample fish fighting power, the stiffness and fast action of the rod is crucial for casting and working heavy lead jigs that weigh anywhere from 6 to 16 ounces in water that ranges up 240 deep.

My rod is mated with a high-speed PENN Fathom 25 lever drag reel. The reel is loaded with 65 pound test braided line. 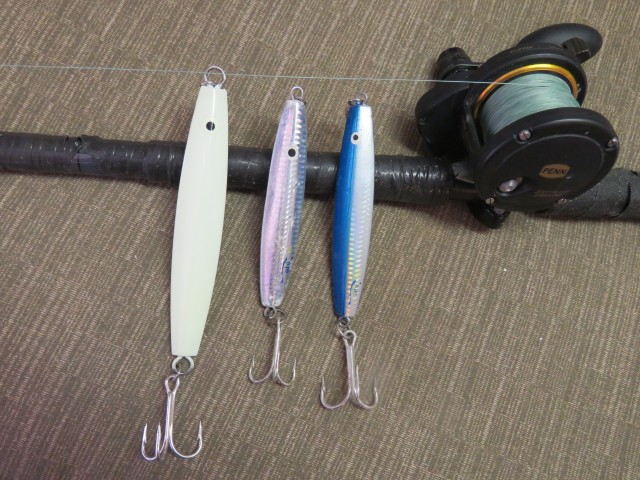 Having a high-speed reel, say 5.1 to 1 or better isn’t critical for fighting fish, but it helps you avoid snags and of course the quicker you can reel your jig out of deep water when you don’t hook up, the quicker you can cast again. This means more quality bottom time and that translates to more fish at the end of the day.

The heavy braid allows me to fish a tight drag to pull the fish away from snags and it also offers incredible sensitivity. It’s rocky down there and if you’re dragging you’ll be snagging.

With the sensitivity of braid, I know exactly what my jig is doing.
What I’ve described is basically a SoCal style yellowtail rig. Seeker, Cousins and Phenix all make rods that fill this nitch. In terms of reels, PENNs are great as are Avets, SoCal Reels, Daiwas and Accurates. No matter what brand you choose, the reel is going to be pricy. Decent models start at $200 and range upward from there.

In terms of terminal end tackle, you won’t need much beyond some big heavy-duty swivels and a spool of 40 to 50 lb mono for leaders. I use green Trilene Big Game line in 50 pound test.

You’ll tie the swivel to the end of the braid using a Palomar knot and then knot on a 24 inch section of mono to act as a leader. If you hang up and can’t pop the jig loose, the mono will generally break before the braid. Braid is expensive and you don’t want to lose yardage to snags.

With rod and reel in hand, it’s time to consider some jigs. I’ve used everything from chunks of rebar fitted with hooks to super expensive custom molded models. As far as I’m concerned when you consider the jig market today in terms of lure effectiveness, stock hardware and cost, the team at Ahi USA turns out one of the very best lines of jigs available.

Ahi basically offers up two different jigs. The Ahi Assault Diamond Jig and the Live Deception jig. Diamond Assault Jigs are the flagship of the Ahi jig line, but Live Deception jigs have a place in your arsenal too. 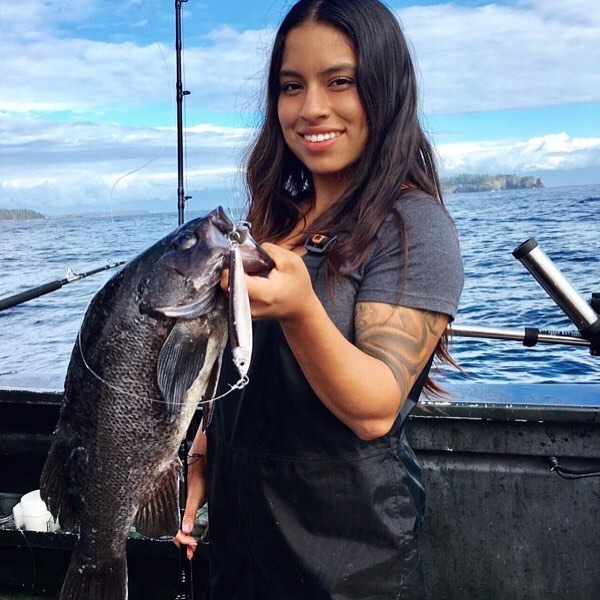 Assault Diamond Jigs are available in a range of sizes from 1 to 14 ounces. For anglers fishing central and northern California and southern Oregon 8, 10, 12 and 14 ounce models are essential.

Why so many similar weights? Because water depth, current flow and the speed of the drift determine how much weight you’ll want to use. You’ve got to have enough weight to get to the bottom, but you don’t want a jig that is heavier than it needs to be. More about this in a bit.

While the Assault jig is a slightly modified diamond bar configuration. The Live Deception jig is a different beast. It is an “anchovy” shaped jig and it has a very realistic look both in your hand and in the water. I carry Live Deception Jigs in 4, 6 and 8 ounce sizes on lingcod trips.

Some folks say jig color doesn’t matter, others think it matters a lot. I’m on the fence. Confidence is huge. I fish a few different colors and have utmost confidence in them.

For Assault Diamond Jigs I like glow white, chrome and blue and Baby Red (a gold and orange finish that looks like a small red rockfish). In the Assault Deception Jigs I go with sardine and anchovy finishes. 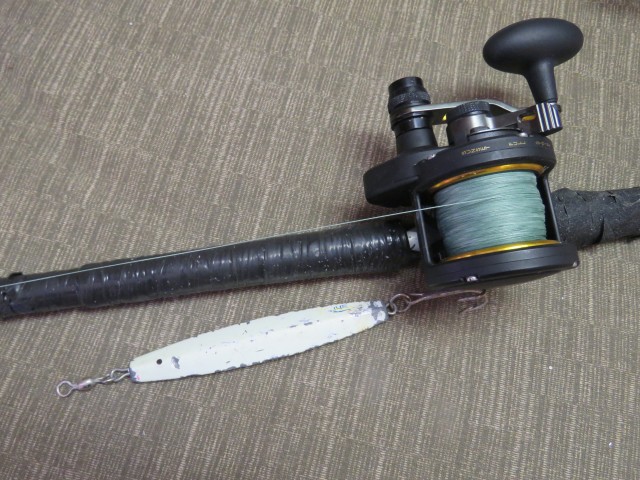 Before I get into fishing technique I’ll mention that I’m critical of one aspect of Ahi jigs. As crazy as it sounds, I think the hooks are too strong….This is only the case because for bottom fish I’m working the jigs through craggy rocky terrain and it’s snaggy. When using powerful gear, it is often possible to free a snagged jig by bending out the hook. You’ll never do this if you snag up with the high quality super strong hooks that come stock on Ahi jigs. Conversely, they won’t bend out on a big fish either…Everything is a trade off!

As a general often broken rule I use Live Deception Jigs in coastal water that ranges from 40 to 150 feet deep and I use the heavier Assault Jigs further off shore in deeper water.

Rule Number One: Selected your jig weight based on the water depth and conditions. If in doubt about the drift ask the skipper to recommend a jig weight. Generally speaking, you can run a jig that is one half to two thirds as heavy as the sinkers the anglers are using on any given trip.

Rule Number Two: Most of the time to be effective you’ve got to cast the jig up drift or “uphill” from the boat. As a result, the bow and stern of the boat are the preferred spots on a charter boat for jigging because these areas offer the easiest casting.

Casting the jig up current gives it time to sink to the bottom before the boat reaches the spot where it splashed down. This is important because you’ve only got a small window of time and a small zone of the bottom where you can effectively jig.

Everybody has their own quirks. Here’s how I jig. I cast the lure uphill and allow it to sink on a semi tight line, gently thumbing the turning spool so that I can keep track of the lure. If I feel a tick or if the line stops before it should. I clamp down with the thumb and set the hook. This is called a “bite on the drop” and it doesn’t happen super often.

Assuming you don’t get hit on the way down you’ll feel your jig hit the bottom with a thud. Using finesse, reel in the slack between you and the jig without moving the jig. If you drag it, you’ll snag it.

When the slack is gone, I sweep the jig up high off the bottom and retrieve line quickly at first and then more slowly as the jig settles back toward the rocks and I drop the rod tip. Immediately I repeat the process with another big lift.

Very often I’ll feel a fish inhale the jig during the fall after the first or second sweep….REEL DOWN, SET HARD, REEL FAST!

During the first two or three sweeps of the rod your line should still be running uphill at an angle, but when the boat catches up with the jig the line will go down at a steep angle.

At this point you want constant contact with the jig and you want it working just over the rocks. Forget the big sweeps now. Instead lift the jig a couple feet and lower it without letting slack form.

Once your line starts angling out to the downhill side, it’s time to burn the jig in and cast again. If you work the lure downhill you’ll snag.

I’ve been using a new trick this season and it’s working. At the end of my cast when the line starts blowing out downhill, I crank as fast as I can for 10, 15 or 20 revolutions of the reel handle and then I drop the reel out of gear and abruptly drop the jig while thumbing the spool.

I’ve had three big lings inhale my Assault Jigs on the drop using this last-ditch maneuver. Apparently, they were watching the jig as it swam off the bottom and couldn’t resist hitting it when the jig lost power and started fluttering back to the bottom.

Well that’s it for now, but in an upcoming issue I’ll touch on jigging again with the intention of giving some upper level tips for both saltwater and freshwater jiggers!