I’ve caught a lot of sturgeon. Not as many as real pros like Jay Lopes, Dave Hammond, Hayden Mullins and Joe Gamez, but I’ve landed my share and more.
If you’re a West Coast angler I think you should experience the thrill of landing at least one big bad diamond back. When you commit to hunting sturgeon, you are going after big game. The stakes are high and you’ll likely experience the highest of highs, the lowest of lows, frustration, boredom and heart racing thrills…
I caught my best, but not biggest, sturgeon while fishing with Captain Barry Canevaro a number of years ago. It was February 12, the sky was overcast and the surface of Montezuma slough was glassy flat.
My hook was armed with a pair of ghost shrimp and a big fat pile worm. The bite was a classic “sturgeon pump” with my Lamiglas rod going into full pull down mode as the big fish slurped up the baited hook.
I snatch the rod, reared back, the rod doubled over and the fish didn’t budge! A beat later when the sturgeon decided something was amiss it shot off on a powerful crescent shaped run toward deepwater, blitzed upward and exploded completely out of the water on the first of several sailfish like gyrating jumps. I can still see the big 8-ounce pyramid sinker dancing around the sturgeon’s head as it wildly tried to shake the hook. It was the incredible fight and the repeated jumps that made that sturgeon so memorable.
When I finally brought the big fish to the boat and Barry scooped it aboard it measured an inch under the top end of the slot. Not only was the fish a great fighter, but it also got to take a ride home for dinner…What an incredible thrill!
This winter we’ve had a good deal of warmish rain and the rivers are running high and muddy. All in all, the late winter and spring are shaping up nicely for sturgeon fishing and anglers in pursuit of diamond backs should do well.
I’m not writing this article with seasoned sturgeon anglers in mind. Instead, it’s my goal to provide some notes for guys that have minimal experience hunting sturgeon. I know I’ve got a lot of readers that have been dreaming of trading punches with a sturgeon for 10, 20 and even 30 years and have yet to hook one. This piece is for you guys and girls…
If you really want to load the odds in your favor, I strongly advise you to jump aboard with one of Norcal’s fine sturgeon skippers. Here’s a short list of skippers that have a proven history of boating big numbers of sturgeon: Chris and Jonathan Smith of the Happy Hooker, Hayden Mullins of Dragon Sportfishing, Jay Lopes of Right Hook Sporfishing, David Hammond of Delta Pro Fishing, Steve Mitchell of Hook’d Up Sportfishing or Joe Gamez of Golden State Sportfishing.
Having said that, I know that many of the guys reading this have their own boats and want to hook a diamond back on their own terms. Okay, let’s go get one. 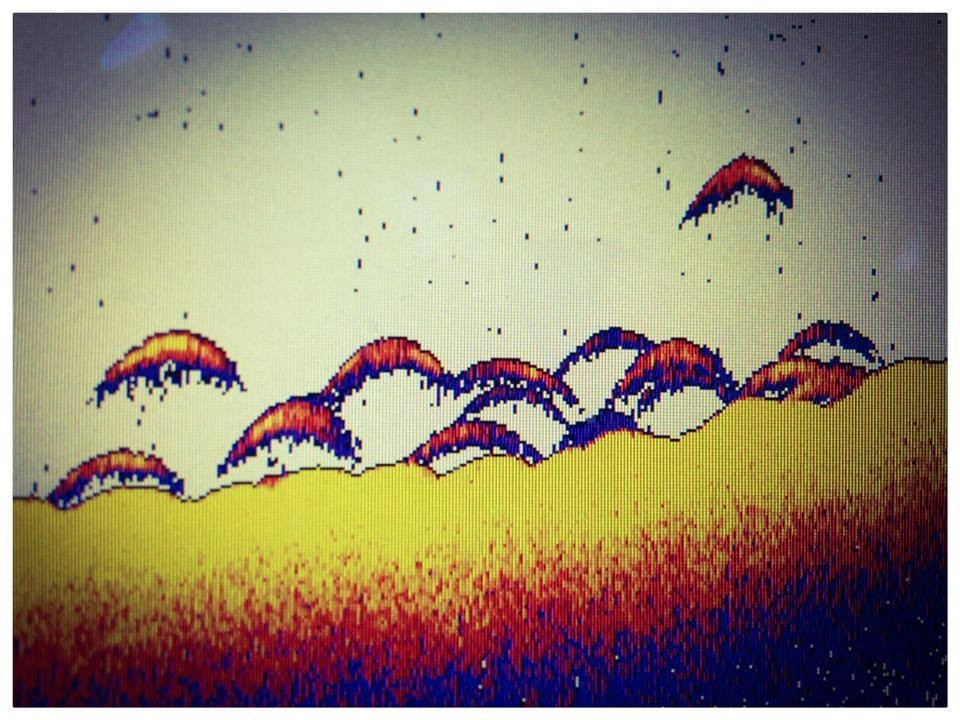 During the late winter and early spring, sturgeon are apt to turn up anywhere between the southern end of San Francisco Bay all the way up through the Bay and Delta system to Isleton and above, but the best area is Suisun Bay and the West Delta including Montezuma Slough, so focus your effort on the water between the Powerlines on the Sacramento near below Decker Island and the Benicia Bridge below the fabled Mothball Fleet. Get a good chart and know how to read it for navigating Suisun Bay. There are lots of sand bars out there and running aground on them is no fun.
You’ll also need a decent sonar unit. A sturgeon will light up the screen with a big unmistakable arch. You are looking for multiple marks in a limited area that are holding on and near the bottom. Sturgeon cruising in the middle of the water column are not feeding so ignore them.
Once you locate a promising looking area, be aware that the fish swim WITH the current so set up a short distance down current of the marks. 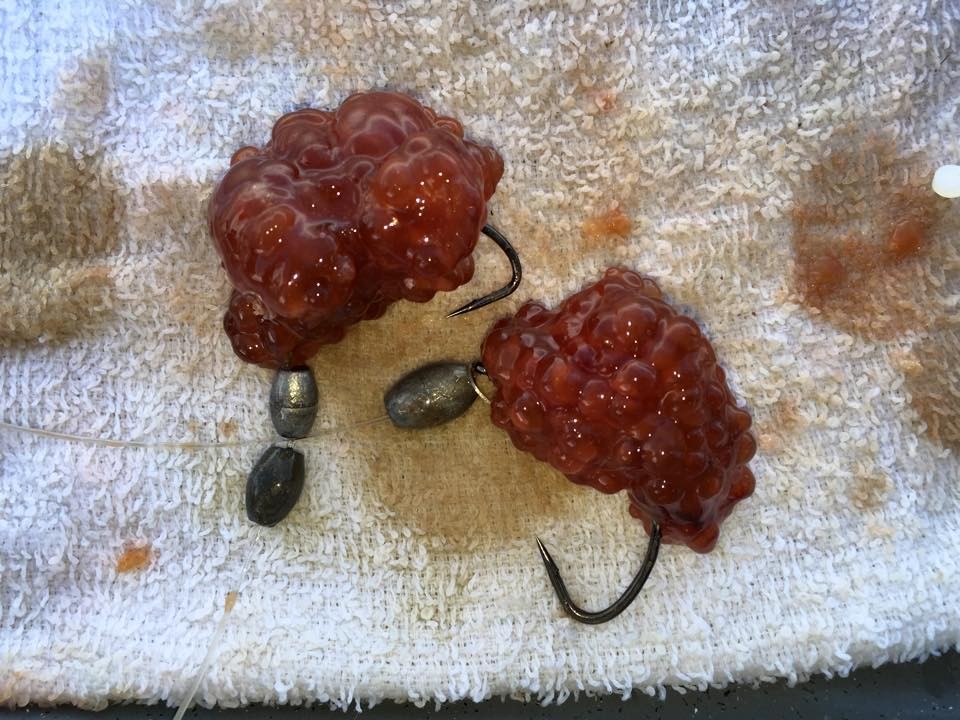 Sturgeon are light biters, but they grow large and are super strong. You need a 7 to 8-foot rod with a sensitive tip for detecting bites followed up with substantial back bone for setting the hook and wearing the fish down. Due the power of sturgeon a conventional reel that will hold at least 200 yards of 50 to 65-pound braid is a must.
Terminal tackle and rigging for diamond backs is simple and straight forward.
To begin rigging pass the main line through a plastic slider sleeve and then attach a large lock snap swivel. Since sturgeon frequent areas with heavy current and you want the bait stationary on the bottom pyramid sinkers from 3 to 10 ounces are the preferred weight.
To the snap attach an 18 inch 50 to 80-pound test mono leader tipped with a barbless 8/0 octopus hook. Most anglers like to put a small half ounce egg sinker on the leader to ensure that the bait sits firmly on the bottom in the current.
Since your hook has no barb the bait will have a tendency to work its way off the hook, so you’ll need to pick up a dispenser of big game size Bait Buttons. These are small latex disks that you place onto your hook once you’ve applied the bait. The “bait button” will keep your bait from sliding off the hook, but won’t interfere with the hookset. 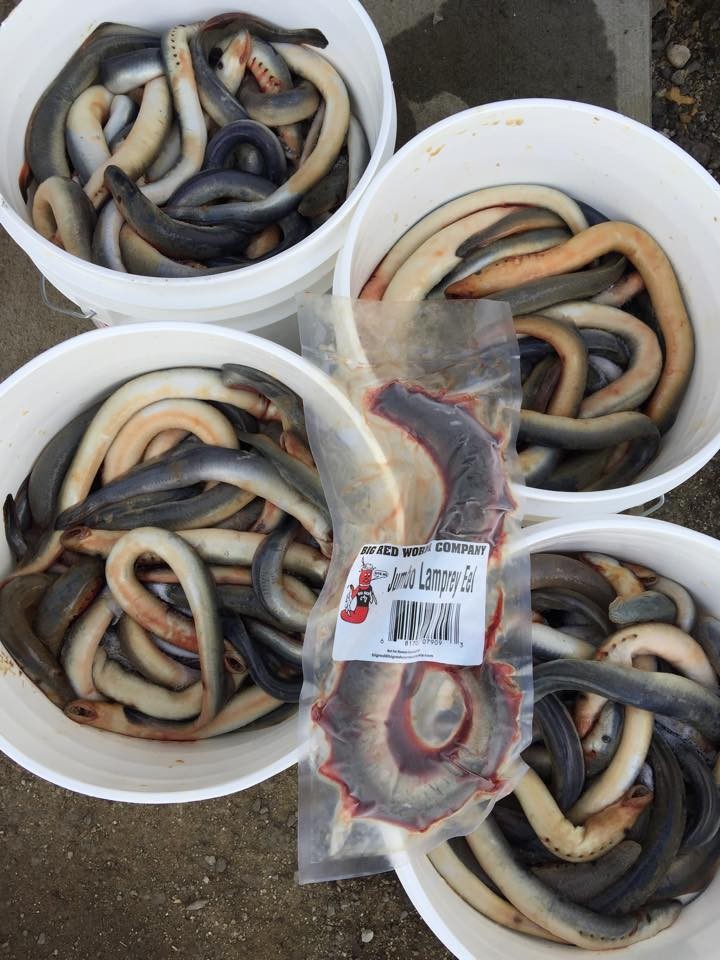 Sturgeon will eat a long list of different baits, but the most consistent baits in the area I’ve outline are lamprey eel and salmon roe. For the casual sturgeon angler roe has some drawbacks, namely you’ve got to have a pretty deep supply of roe to use it effectively and I suspect most of the folks reading this don’t have 10 to 20 pounds of uncured roe bouncing around in the freezer.
To be effective while fishing roe, you’ve got to keep a big glob of fresh eggs on your hook at all times. To accomplish this, you’ll burn through a lot of roe during a day on the water.
Eel is a different story entirely. Sturgeon love it and it is exceptionally tough. It stays on the hook forever, bait stealers can’t ruin it and one or two good size lampreys will provide all the bait you need for the season.
Finally, lamprey generally prompts a strong prolonged bite from the sturgeon that come knocking, giving you plenty of time to set the hook.
To bait up cut a 2 to 3-inch fillet off the side of the lamprey, pin it on the hook through one end and put a Bait Button or two on the hook.
Before casting the bait out and every time your reel it up to check it for weeds, sweeten it with some Pro-Cure Super Gel. Anise Plus is my favorite, but Bloody Tuna, Eel and Predator are good bets too. To increase the scent trail, I like to add a little Pro-Cure to my sinker too.

Sturgeon can be caught at any stage of the tide day or night. However, the action is typically most consistent during periods of strong tidal movement and the best fishing takes place at the beginnings and ends of the tides.
When you cast out your line be sure to set the drag at the level you’ll want it for fighting a fish and place the rod in a balancer or rod holder with the reel in gear. I prefer a balancer, but most of the pros I’ve mention run with standard rod holders. I think for the novice, it’s easier to pick up the rod and set the hook without pulling the bait away from a chomping sturgeon when using a balancer.
The classic sturgeon bite is called a “pump”. This is because your rod will pump steadily down in the balancer anywhere from 6 inches to 2 feet or more. A typical bite will result in two or three pumps before the fish realizes something is wrong and drops the bait, but you can’t always count on it.
When you see a pump, quickly pick up the rod, being careful not to tug the line against the fish, as this will spook it. The best course of action is to move the rod tip toward the fish, allowing a slight amount of slack to form in the line and then move the tip to the side until you feel the slightest resistance. At that point stay statue still with your thumb locked against the reel’s spool to prevent the drag from slipping during the hook set.
The second pump will start as a feeling of pressure that builds in strength. At this point you should be feeling a decent amount of resistance, almost as if a big clump of weeds has hung on the line. This is the time to hammer the hook home by sweeping the rod upward.
A lot of guys make the mistake of looking up at the rod tip and freezing after hookset. Don’t do that, start reeling immediately. A hooked sturgeon will often head right at the boat and if you don’t pick up line with the reel, slack will develop and the fish will have a great opportunity to toss the barbless hook or roll in your line and cut you off.
Once you’ve got one on the hook enjoy the fight and make sure the fish is completely spent before sliding it into the net.
Oh yes…I didn’t mention it earlier, but you’ll need a big salmon size net to land your fish.
You’ll also need to buy sturgeon tags. As of now, keepers are 40 to 60 inches long measured from the tip of the nose to the fork of the tail. Read the regulations and follow all the rules to the letter.
Wardens aren’t too concerned about the fish holocaust that takes place at the Delta pump every year, but they love to cruise the Delta and write expensive tickets for sturgeon anglers that violate the rules with small infractions…Such is the state of the game. Know the law and follow it closely.