A while back I was out trolling for landlocked kings with a buddy of mine and the bite was tough.

We were in the process of showing the lake’s salmon all the requisite offerings in hopes of finding something the fish would hit, when my partner asked me whether I thought lure color was a big factor in making fish bite. That’s a key question, not just for salmon anglers, but for all anglers that rely on artificial lures for catching fish regardless of the species. 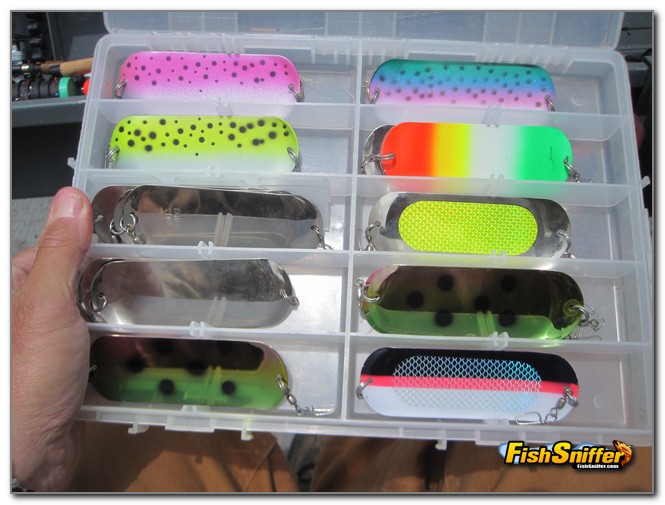 At the time, I said that I thought the impulses collected by the fish’s lateral line were a crucially important factor in leading fish to the lure and sparking strikes. But that really doesn’t answer the question of color. As a result, I’ve been thinking about lure color ever since.

Now I’d like to tell you that I have a definitive answer about the importance of lure color, but I don’t. There are some clues that hint to how important color MAY be in certain situations, but beyond that, the influence lure color has when it comes to triggering strikes seems to be more a matter of faith than hard science.

On the scientific side of the argument, there are some concrete things that we do know. First of all, it has been demonstrated that most fish can see and distinguish between different colors. The fact is, the eyes of fish such as salmon, trout and bass work a lot like our eyes in the sense that both their eyes and our eyes have rods and cones.

In light conditions the cones in our eyes pick up color. When it’s dark the rods in our eyes take over. Rods can’t discern color, so our vision is limited to light and dark areas and we are able to determine shapes.

In an air environment, colors don’t vary from place to place. If you look at a red fire truck on top of Mount Everest, the highest point on the earth’s surface, and look at the same fire truck in Death Valley, one of the lowest points on earth, the color will appear the same. 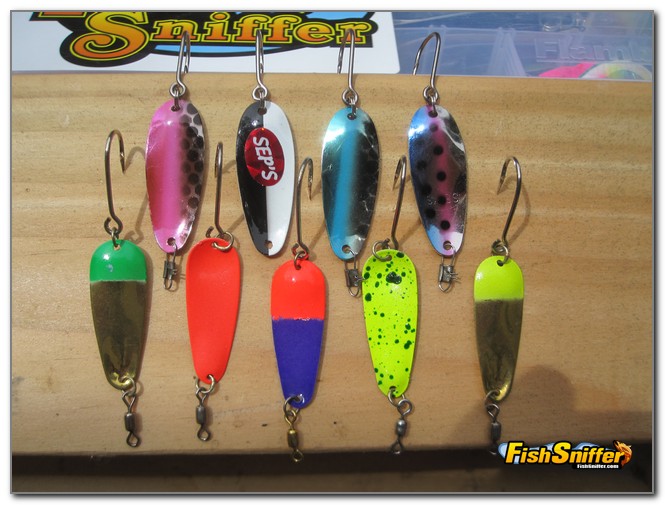 Now take that same fire truck out to a lake and submerge it beneath a foot of water. It will appear to be bright red, yet if you submerge it in 50 feet of water, don your scuba gear, and dive down to it you’ll find that it’s once lustrous red paint job will appear as a dull grey.

The different colors that we are able to see are a function of the color spectrum present in sunlight. When you see a rainbow, you are seeing sunlight broken down into its basic hues. These hues travel at different wavelengths. When sunlight travels through water, the various wavelengths that make up various colors begin to be absorbed by the water at different depths and as a result colors disappear and are replaced with shades of grey.

Red colored lures fade first and will be a drab grey by the time they reach 25 feet, orange goes next at around the 40 foot level, yellow probably holds up down to about 65 feet, while blue or green lures maintain their color down to around 100 feet.

Obviously, these color and depth facts relate more to some anglers than others. Bass guys, that spend most of their time fishing in the top 25 feet of water can use pretty much any color they want and be confident that the bass will see it. Trout and salmon trollers that routinely fish down to 100 feet or deeper need to be more aware of the way depth effects color. Clearly if you are targeting landlocked kings or kokanee suspended at 80 feet, you don’t want to tie on that great looking red lure since it will have long since faded to grey by the time it reaches the fish.

Having said that, while I’m convinced that color is a factor, I’m not sure how big a factor color actually is. Do landlocked kings feed when they are holding in 80 to 100 feet of water? Yes. What do they feed on? Baitfish. What color are baitfish? They are grayish silver with a lighter belly and darker back. That’s right, baitfish are not blue or fluorescent green, yet the salmon are able to find them and eat them. This leads me to believe that while color vision is a factor in the feeding behavior of landlocked king salmon at times, it is not the primary factor and at depths beyond 80 feet color vision may not be a factor at all.

Personally, I think that the ability to see colors in only part of the puzzle in terms of fish locating and striking prey. A fish’s lateral line, the strip of nerve sensitive issue running along the flank of trout, salmon and other predatory fish senses vibration and movement.

Since we humans don’t have this ability it is hard for us to understand, but it seems to be something akin to radar in as much as the fish can “sense” the world as a 360 degree sphere of “feeling” and can pinpoint objects on that sphere based on the sounds and vibrations they emit. I believe they can even make determinations about the physical state of the prey that surrounds them using this information. This is one of the ways a king or brown trout can pick an injured baitfish out of a school of healthy fish. 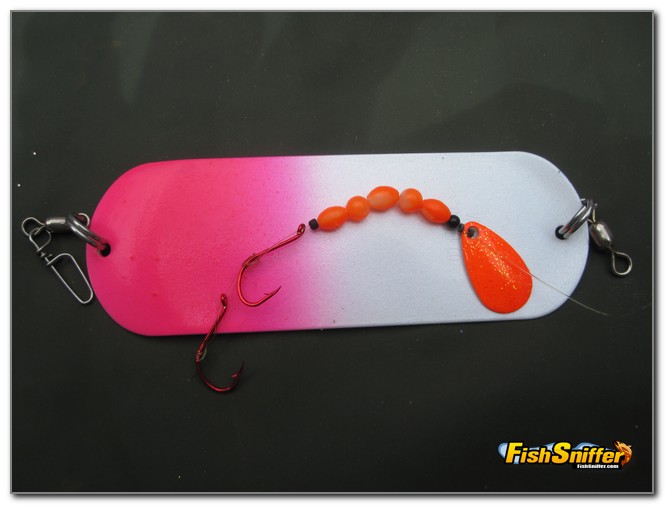 At this point I’ll bring this discussion full circle with a couple examples. When I fish for lingcod, I’m typically working the bottom in water that is from 90 to 120 feet deep. My preferred lure is a blue anchovy shaped jig. I have a lot of confidence in this bait and won’t buy any other color if blue is available. Most of the time, these lures get lost fairly quickly, but once in a while one will avoid the snags and stick around for a while. It doesn’t take the craggy bottom long to scrape almost all the finish off these veteran jigs and they soon take on a drab whitish grayish color. However the fish continue to hit them just as vigorously as they did when they were new. Clearly the blue color is more important to me than it is to the lings!

Okay, now cut to Whiskeytown Reservoir. Gary Miralles and I are trolling for ‘kokes. Gary has a camera attached to his downrigger so we can see fish approaching our lures on a portable television. We are trolling in 60 to 80 feet of water and we are fishing with Hum Dingers and Cripplures. It doesn’t take us long to determine that the only lures the salmon will follow or hit are pink. At those depths, pink shouldn’t even be visible…

So what’s the bottom line? I don’t think colors are a primary factor in making fish hit, but my tackle box contains every imaginable color combination because sometimes if you don’t have the right color, you just aren’t going to catch fish even though they want a color they shouldn’t even be able to see!