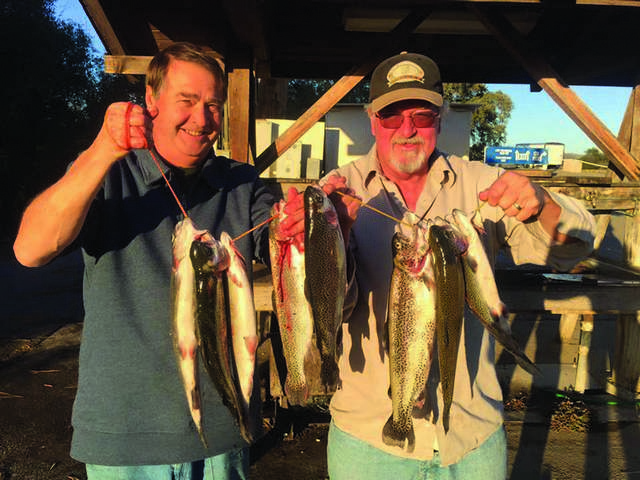 (Ione) If you like to catch big, bold rainbow trout, now’s the time to hit Lake Amador.

The lake management planted 3,500 pounds of rainbows in October, 5,800 pounds in November and 2,400 pounds in December to date.

“We are planting fish every Thursday,” said Kathy Isaac of the Lake Amador Resort. “The fish range in sized from 2 to 12 pounds.”

Shore fishing with PowerBait, PowerEggs, nightcrawlers, spoons and spinners remains the top-producing method. The best areas to target are the spillway, dam and boat docks.

“Most anglers are concentrating on the trout, so I haven’t received any reports on bass, crappie, bluegill or catfish action lately,” she added.

The Lake Amador Trout Derby will run through March 6. Anglers entered in the derby who catch tagged fish can redeem the tags for an array of prizes ranging from jars of PowerBait, to two nights of camping, to cash prizes up to $200. A total of 300 tagged fish will be planted.

The one time entry fee is $7.00, good for the length of the derby. On the derby’s final day, two anglers will win grand prizes of $500 each, selected in a random drawing of those who landed tagged fish in the event. To win, you must be present on the last day of the derby.

The lake is currently 47 feet from full. The launch ramp is still pavement and has one dock in the water. 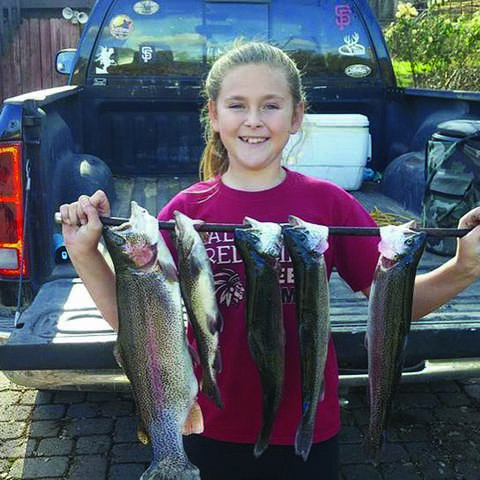 “We have planted 12,900 lbs. of Mt. Lassen trout with a total of 4,300 lbs planted into the pond,” said Terry Willard of the Camanche Recreation Company. “We are expecting an additional 1,200 lbs this week.”

Shawn Beckerley caught his limit of rainbows while top lining 150′ back using Shasta Tackle Matrix lures. Daniel Howard and his daughter Kaylee caught a trout limit in two hours while fishing PowerBait about 15 yards off shore in the North Shore Day Use Area.

The inflow from Pardee Lake remains at 11 cfs. and the outflow from Lake Camanche is 181 cfs. The current spill level is 56.35′ and approximately 3,500 surface acres of water.

(Angels Camp) Black bass continue to dominate the angling scene at New Melones Reservoir, since the shoreline bite for trout hasn’t started yet.

“We are still receiving many reports of anglers catching a handful of chunky bass,” said John Liechty of Glory Hole Sports. “The bite did slow up a little, but it is definitely worth launching the boat and making a few casts.”

“The fish have moved to a winter-like pattern and slower moving baits are working best. There is a good amount of fish holding in 35-55’ of water. Try using soft plastics rigged on a shakey head or on a dart head jig,” he tipped.

“The fish have been targeting shad for months. A shad patterned worm is a good choice. Be sure to be patient and not work your baits too fast. The fish are slowing down and not as willing to chase. A soft plastic worm crawling along the bottom will catch the attention of nearby bass and coax them into biting,” he said.

He advised, “Occasionally you will find an area where the fish are in a feeding frenzy and actively feeding on balls of shad. When you locate these actively feeding fish, try using a Lucky Craft Pointer, Flash Minnow, Staysee or other reaction bait.”

“One other must-have for this time of the year is a rig that can be fished vertically directly under the boat. Try fishing a jigging spoon or a drop-shot rig to catch the fish you find on the graph,” he disclosed.

The trout bite is right around the corner; last year in the first week of December anglers were bringing in limits of holdover trout.

“This week we expect to get a little rainfall and then some cooler temperatures. These weather patterns will continue to help with the lake’s fall/winter turnover,” he noted.

When the fish move into the shallows, fish inflated nightcrawlers and Power Bait on sliding rigs or minnows or nightcrawlers under bobbers in the coves.

“The catfish bite has slowed up a little due to the recent cold weather and dropping water temperatures,” he revealed. “Although you might not get many bites, the you do hook are generally big.”

Try fishing near large rock piles that are located just off of the main river channel and major creek channels. Try using large chunks of mackerel or using the entire fish with a couple of oversized hooks

New Melones is currently holding 269,437 acre-feet of water. It is currently 799 ft. above sea level and 287 ft. from full. The water temperature continues to cool, with the average being 55-58 degrees.

Glory Hole Point boat launch is a one-lane dirt and gravel road leading off of the end of the point. There is not a courtesy dock and it is best to launch with a 4-wheel drive vehicle.

(La Grange) Don Pedro is holding at 32% of capacity and fishing pressure is light.

The staff at Fisherman’s Friend in Lodi described the bass fishing as good on main lake structure. Soft plastics and jigs are the most consistently productive baits, but spooning and working swimbaits are also producing fish when the conditions are right.

The 25 to 40 depth range has been best for bassers, but early and late in the day fish can be found shallower.

Don Gibson of Loma Rica headed out to Don Pedro last week in search of trout from the bank.

“I generally do pretty well at Don Pedro during the month of December, but I didn’t do too well on my last trip. I only got three bites and landed a pair of rainbows to 15 inches while fishing with worms and PowerBait. All the bites came on chartreuse PowerBait fished about 20 feet from the bank,” disclosed Gibson.

(Snelling) With extremely low water levels most of the action at McClure and McSwain is being had by bank anglers targeting either catfish or bass.

Bass are hitting a variety of standard offerings including plastic worms and live minnows.