Imagine trophy striper fishing on the Sacramento River on a cold winter morning. You make a cast near a tree that happens to be in the middle of the river. The 8 inch Savage Gear Glide Bait barely hits the water and there’s a huge explosion on the surface of the water. 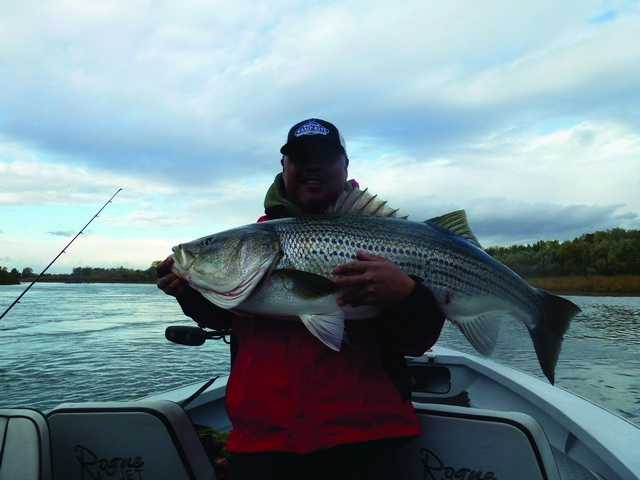 I was fishing with Brett Brady of Barebones Guide Service and I yelled over to him that this was a huge fish. At that point both of us started to act like two little kids that had never caught a fish before. There was pure excitement because this is the trophy sized fish that we were hoping to have a chance to catch.

Big fish are smart and this fish was no exception. After the fish realized it was hooked, it made a run for the tree. There was no turning this fish around. The fish was hooked right next to the tree and it didn’t have far to go before it swam underneath it and was on the opposite side from where I had initially hooked it.

I could feel my line rubbing against the tree as the fish made its way down river. Soon, my line was wrapped around the tree and it was impossible to reel in my line. We were only fishing in about 6 feet of water. I tried to free my line for several minutes, at times, laying on my belly on the boat, but to no avail.

It was at that time that Brett came up with a brilliant idea. Brett maneuvered the boat to the free side of the line and attempted to catch my line with line from another rod and reel. Eventually he caught it. Then I wondered what we were going to do with it. He told me to cut my line. Ok, now what?

We grabbed another rod and reel and connected the line to it as quickly as we could because if the fish decided to make another hard run we would’ve been in a really bad position. Fortunately, we got the line connected to the new rod and reel and we were back in action. High fives, cheers, and many laughs wondering how we were able to accomplish this small feat.

Unfortunately we weren’t laughing for long because as I mentioned previously, big fish are smart and this one was no exception. The fish made another run right back into the tree. Yes, we were in the same situation we had just gotten ourselves out of. The fish was wrapped in the tree and stuck, again!

This time, fortunately, we knew exactly what we had to do. We started the whole process all over again. We caught the free side of the line, cut the line, grabbed a third rod, and connected the free line to the new rod and reel. Could this really happen twice with one fish?  Truth is, I’ve never had to do this once in all my years of fishing and now we’re doing it twice in one fish battle.

I thought we had cheered and laughed the first time we were successful with the transfer to the new rod and reel but this time the excitement was indescribable. (I smile and chuckle as I write this because it was epic and amazing.)

The transfer to the new rod and reel was complete and thankfully, the battle with the fish continued. From this point, it became a more traditional fight with the fish making a run then me gaining some ground only for it to make another run. We finally got the fish to the boat and was able to land her.

It was a really healthy fish with great color but what amazed most was the girth and the size of its head. Huge!

The story ended perfectly! The fish only had to pose for a couple of pictures and then she was released back into the river!

There were many factors that allowed us to catch this fish.

Brett’s knowledge of the river is so good that he knows where these big fish hang out. His boat control is amazing and he puts you in the best position possible to make that perfect cast. You don’t get many opportunities when you’re trophy fish hunting so you have to make the most out of every spot and every cast because you may only get one bite for the day.

The gear you use can make the difference between landing the big fish and losing it as well. These areas often have many structures like trees in the middle of the river and you need gear that can hold up to tough conditions.

The first thing I thought would fail would be my line. Why wouldn’t the line break? A big fish running down the river with the line rubbing against the tree and eventually completely wrapped around the tree.

There were times when I was wrapped in the tree and the rod was definitely put to the test. I hooked that fish in 6 feet of water or less and when I was wrapped around the tree, on my belly, my rod completely submerged in the water trying to maneuver it every way possible to get the line out.

The rod was hitting the tree, put in awkward positions and bent to the max trying to get the line clear.  Luckily I was using a 8 foot Phenix M1 Med/Fast Action 80MH 10-25 line rating. It’s what I’ve been accustomed to for the last several years and it held up like a champ!

It is not uncommon when you’re trophy striper hunting to throw big heavy baits. Your reel choice is just as important as rod choice. The Lew’s BB1 Inshore reel with power handles is my reel of choice. It’s light in weight at 7.8 oz but it can handle casting big baits. It also has plenty of line capacity, casts extremely well, and has a really smooth drag.

If it wasn’t for the Savage Gear 8 in Glide Bait in Red Horse color this fishing experience would’ve never happened! Confidence in what lure you are using can be the difference in a successful day or not. I’ve gained a tremendous amount of confidence in this bait over the last couple of months because it looks good, the action is fantastic in both calm water and fast moving current, and it produces big fish!

Along with fishing in the right spot, with one of the best guides, and you have the right bait and gear, you still need to have a little bit of good luck on your side. On this day we definitely had some luck on our side. We were able to have a fishing experience I will never forget. Not to mention I caught a personal best and a fish of a lifetime!

Captain Brett Brady is one of my favorite people to fish with because he’s a great person, a phenomenal fisherman and an extremely talented guide. If you would like to catch stripers, sturgeon, kokanee, trout, and many more,  give him a call. He can be reached at 530-263-4451 or visit his website at www.fishbarebones.com