Even during a drought, Englebright Lake is always full. That means that you will have no problem launching a boat at the U.S. Army Corps of Engineers reservoir that sits at an elevation of 527 feet on the Yuba River off Hwy 20 just west of Penn Valley. 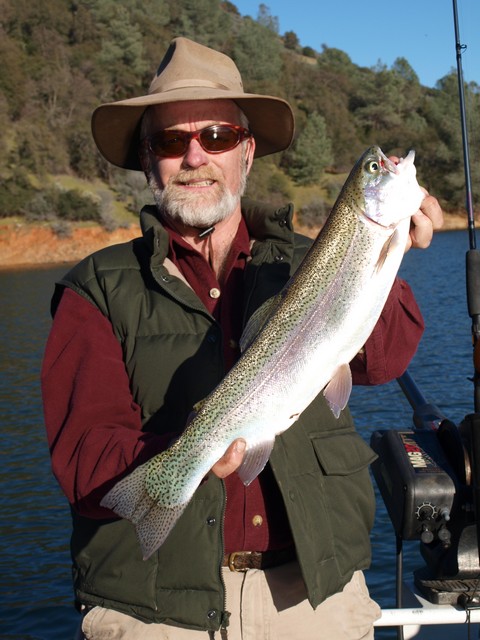 Not only does Englebright offer easy access to anglers during the drought, but it holds a wide variety of rainbow trout, brown trout, kokanee salmon, bluegill and largemouth, spotted and smallmouth bass. Trout fishing is good year-round at Englebright, since the lake benefits from the cold water released from the bottom of Bullards Bar Reservoir.

However, it’s the stringers of big rainbows up to 10 pounds that have attracted the most angling attention in recent years, due to the efforts of Lisa and Nick Rogers, owners of the Skippers Cove Marina.

The pen project began in 2010 after the Rogers had purchased the Skippers Cove Marina and realized that trout weren’t being stocked in the reservoir, due to a biological assessment of lakes and streams required of the California Department of Fish and Wildlife, according to the terms of the settlement of a lawsuit filed by environmental NGOs.

They realized they needed to put fish back in the lake and put Englebright on the map of fishing destinations  –and the pen program was a good way to improve the fishery. They built four floating pens, each 8 feet wide by 12 feet long, by 12 feet deep, and put them in the marina. 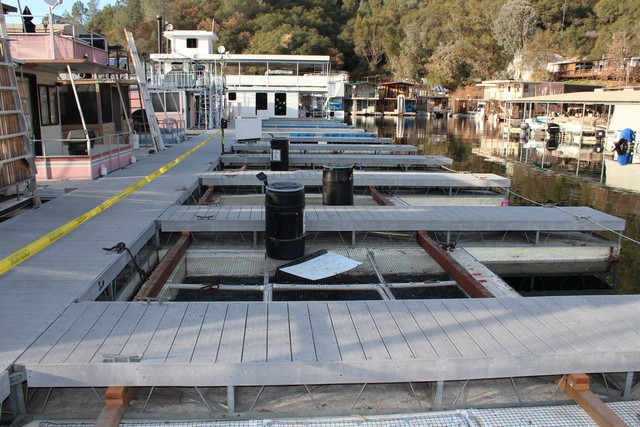 After the construction of the pens, the marina owners purchased 1,000 pounds of rainbows in the 1-1/2 to 2-1/2 pound range from a private facility, Mount Lassen Fish Farm, in the pen and released them into the lake, after having grown dramatically larger, in April 2012.

Due to the fast growth rates in the pens, the fish reached sizes of 6 to 8 pounds when they were released, providing many anglers with a big surprise when they hooked one of these monsters while fishing from shore or boat.

That was the case when former fishing guide Rick Kennedy, Rick Brown, and I had a lot of fun catching and releasing a bunch of rainbows in the 10 to 14 inch range on an evening trolling adventure to the lake that December.

The marina raised another 1,000 pounds of trout in the 2 to 4 pound range from November 2012 to April 2013. “These fish weighed between 8 and 9 pounds when released,” said Lisa Rogers.

In November 2013, for the first time, the DFW loaded 2,000 pounds of catchable rainbows in the half-pound range into the pens. These fish were released in April 2014. 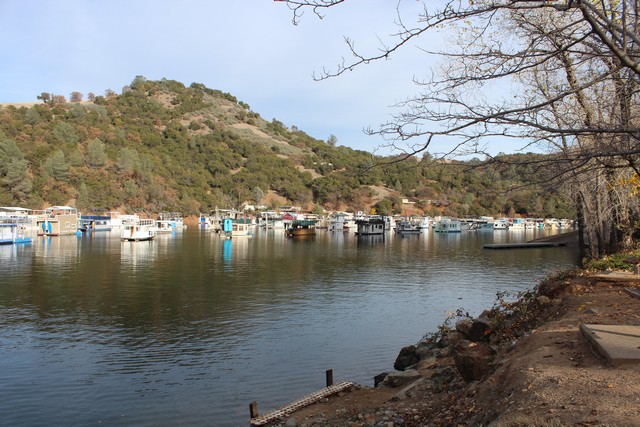 Since then, the fish released into the lake have been fish in the half pound class from CDFW and PG&E. When released into the reservoir in the spring, they weigh from 2 to 3 pounds, not as big as they were the first couple of years, but still some very beautiful trout.

Since the project started, the reservoir has definitely gone up on the map of fishing destinations.

“We got a lot of great response to the pen rearing program,” said Rogers. “The day use fees that the Army Corps of Engineers took tripled because of the big fish available in the lake. And fishing clubs began to show up with their members at the reservoir.”

She said the marina provided 100 percent of the funds for purchasing and feeding the fish and operating the project when it began. She had to obtain a private stocking permit from the DFG to begin the venture when she started. However, the CIFFI is now donating $1,000 toward the food for the trout.

The Department stocks around 8,000 pounds of rainbows annually in the reservoir most years. The Pacific Gas and Electric Company also plants the lake with 2,500 pounds of trout with mitigation funds, making the total stocked per year in the lake approximately 10,500 pounds.

Because Englebright is located in a steep, narrow canyon, shore fishing access is limited mainly to the area from the marina and launch ramps to the dam and in the Rice’s Crossing Area.

Although boat fishing with PowerBait and nightcrawlers is effective, the most popular technique for fishing the reservoir is trolling.

The lake also hosts a sleeper population of German browns. While most browns go 2 to 4 pounds, trophy fish up to 13 pounds have been taken here.

Paul Kneeland, Fish Sniffer Publisher, and Bridgette Looney landed a 19 inch brown and a rainbow while trolling Uncle Larry’s spinners and Tasmanian Devil lures at 16 feet deep in front of the dam on a trip to Englebright this December. 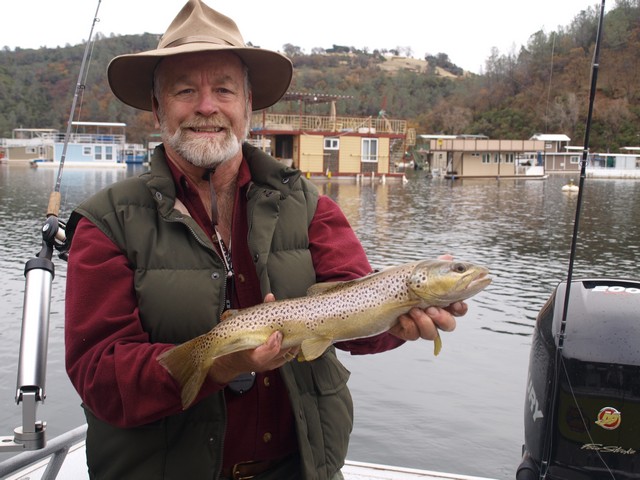 Kokanee salmon spill over from Bullards Bar and are occasionally hooked by shore anglers and boaters. One shore angler landed a 20 inch kokanee weighing 2-1/4 pounds in 2010, according to Rogers.

While known as a salmonid fishery, the lake also supports a decent population of largemouth, spotted and smallmouth bass. The lake largemouth record is 10 pounds.

A creel survey, conducted by the Department of Water Resources in 2003 and 2004 at Englebright and published in 2006, was made in conjunction with a University of California, Davis biological mercury study throughout the Yuba River watershed. The survey yielded some fascinating information about the species composition at the lake.

“Rainbow trout was the most common species caught in Englebright, representing 56 percent of the catch, followed by bass (28%) and bluegill (11%),” according to the report.

Rainbow trout represented 86 percent of the catch that was retained, followed by bass (8%), bluegill (3%) and crappie and kokanee (1%each).

Boats can be launched at the Park Headquarters, the Joe Miller Launch Ramp, or at Skippers Cove, where boats can also be rented. The shoreline is steep and rocky, but there are sandy beaches with pines and oaks at some campgrounds. 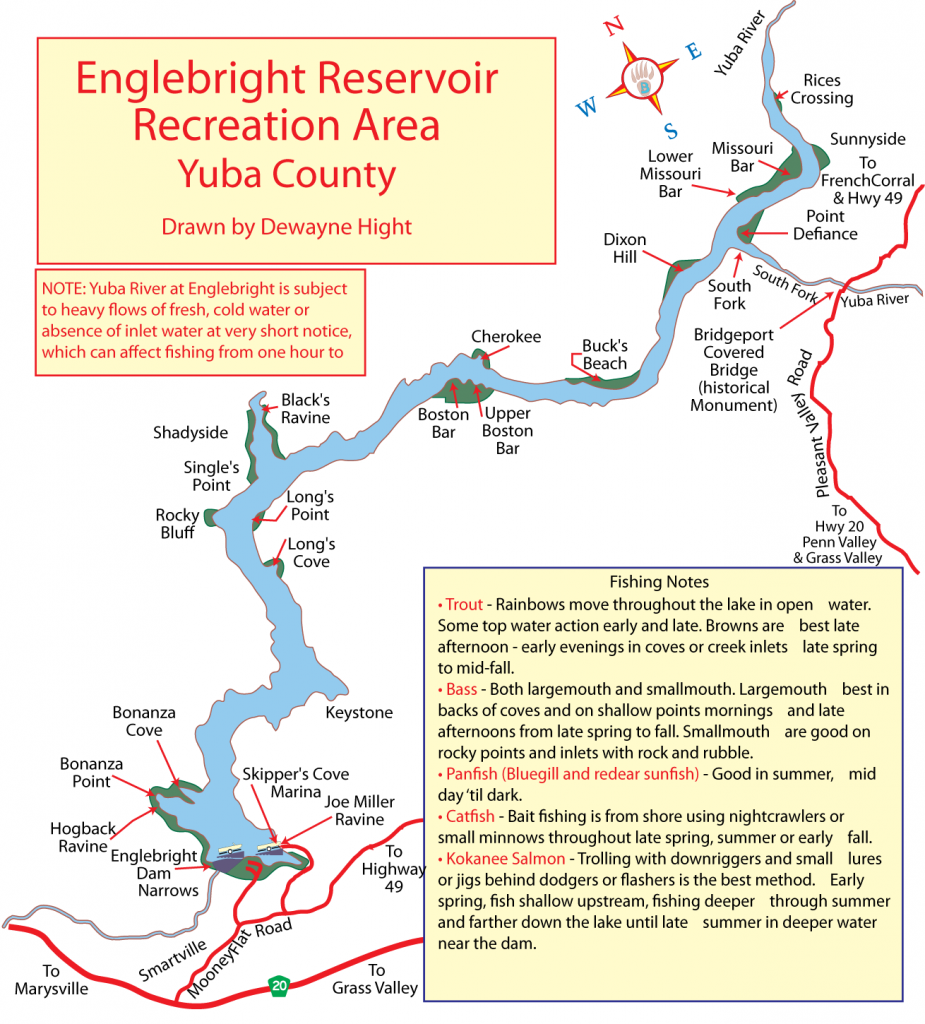