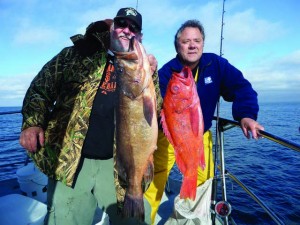 (Berkeley) The end of the rockfish season is seen by many as the end of the saltwater fishing season. This year the season ended on a somber note with crab fishing closed and rough seas that kept both charter and private boats in port.

In review the 2015 season was a memorable one for East Bay charter boat anglers. All the usual species were on hand at one point or another during the season including rockfish, lings, stripes, salmon, halibut and sharks.

Warmer then usual water conditions also brought a lot of exotics into our waters during the late summer and fall, including bonito and clouds of mackerel.

If you had to point to one or two highlights for the season, one would have to be the incredible striper action that took place both inside and beyond the bay as huge schools of bass rampaged on clouds of anchovies.

The other bite that really stands out was the lingcod bite. The average keeper lingcod caught wasn’t large at 6 to 7 pounds, but they were incredibly plentiful. Lots of charter boats scored limits and near limits of lings daily from July right on into the fall.

There were some big lings in the mix too. The highlight of this reporter’s season was bagging a 30 plus pound lingcod off Point Reyes in August!