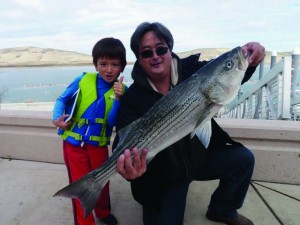 (Byron) Winter has begun at Los Vaqueros Reserovir, where rainbow and striped bass are both active.

The reservoir is currently holding 85,500-acre feet of water, just over half-full. The water temperature is at 55-56 degrees and the water clarity is good.

“Fishing for trout continues to be good with all the trout plants and cooler water temperatures,” said Brian Demmunik of the Los Vaqueros Marina. ‘They are being caught in South Cove and Oak Point as well as all around the lake.”

“The baits of choice for shore anglers is garlic scented PowerBaits, nightcrawlers or Kastmasters,” said Demmunik. “Trout average a pound and a half but range to over 5 lbs. Before Christmas, there were two 1000 pound plants from Mt Laseen and one 1000 lb CDFW plant. With the plants, trout fishing has improved with more limits being caught from all around the reservoir.”

Trolling is popular with anglers using Rapalas and other lures from rental boats in the coves.  Limits are continuing to show up out of Cox and Howden coves

“Shakers are still the main action with striped bass,” said Demmunki. “We are still seeing many undersized fish being caught for every keeper.  From shore, cut anchovies or shad are the baits of choice. Stripers need to be 18 inches or more to be legal.”

“Catfish continue to be caught here and there but with the cooler water, they are becoming more difficult to catch.  For those wishing to target catfish, anchovy and chicken liver are the best choices of bait,” he added.

(Castro Valley) After a long period of slow fishing, the trout action at Lake Chabot is finally perking up.

“After 1,000 pounds of rainbows were planted this week, Indian Cove was the hot spot,” said Betty Ann of Lake Chabot Marine & Café. “It seems like everybody fishing there has been getting their limit of trout. Anglers are fishing worms and PowerBait from shore.”

Big fish honors go to Mike Dangler, who caught and released a 7-1/2 lb. largemouth bass while using an Alabama rig.

The lake has risen with the inflow into San Leandro Creek from recent storms. 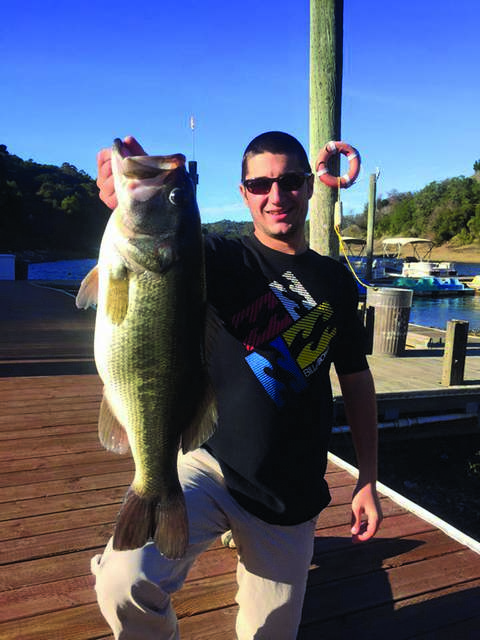 (Livermore) Due to recent rains, the lake has risen almost 6 inches. The water temperature is still around 50 degrees.

“Trout are eating all over the lake and that’s the only species reported this week,” said Captain Danny Hollis of the Rocky Mountain Recreation Company. “Salmon eggs and Roostertails are the best bets this week.”

Ephraim Bacatat of San Jose caught a 6 pound rainbow on salmon eggs in the Narrows. Ricky and kids of Livermore landed a full limit of trout while using Rooster Tails in the Narrows.

During the previous week, Hollis reported, “Striped bass are still being caught as well in the shallows in about 5-15 feet of water. Jerkbaits and jigs have been the weapon of choice, but the A-rig is a secret among big striper anglers. They will also eat baits like mackerel, anchovies, sardines, and chicken livers.”

“Catfish are always a safe bet when you want to catch something, especially in winter when the fish are heavily concentrated due to the lake’s low level. They can be caught on all the baits that a striper would eat – and many others such as nightcrawlers, shrimp and squid,” he revealed.

(Fremont Trout fishing continues to be solid with people catching limits each day at Horseshoe Lake, according to Joe Sullivan of the East Bay Regional Park District. The park district continues to plant the lake regularly with rainbow trout.

Currently the boat ramp and fishing pier are both open and the water is on the rise from recent storms.

Big fish honors go to Mike Biernacki of Hayward, who caught a 7 lb. 11 oz. trout in Kiosk Cove on Power Bait. Lauryn, Kalyn and Matt Agleham of Milpitas pulled in a good-looking stringer of trout on the Peninsula. On his next trip, Matt caught a limit with the largest at 9 lbs.

Please remember that you must be 100 feet away from the fish tube, the boat dock and the beach area while fishing from the shore and from a boat. Also, note that the use of lead fishing tackle is prohibited at Quarry Lakes.