The traditional opening day of steelhead season on the American River below Nimbus Fish Hatchery, January 1, was by no means great, but it was a heck of a lot better than last season when very few fish were caught. The releases from Nimbus Dam were only 500 cfs, the lowest it has ever been on any opener that I can recall.

For Bruno Novi, who caught a 7 lb. steelhead, it was a good day of fishing. “I got down to the river below Nimbus Hatchery at 8:30 am and hooked the fish right away after another angler left the spot,” said Novi, a dedicated steelhead fisherman.

He used a homemade black fly, under a float, to catch the fish, a hatchery female that he kept and put on the stringer.

While I was down at the river for a couple of hours, I saw several other fish hooked up, including one dark fish that was released and a bright wild steelhead that was also released.

While I was taking photos of Bruno’s fish, another avid angler hooked and lost a big steelhead. “You should have seen the big steelhead that we hooked in the Basin on December 17 and 18,” he noted.

I counted around 30 anglers from below the hatchery to Sailor Bar, when I arrived at the river at 9:30 am, although I figure a lot of anglers had already left.

The key to success in the low water was light line – as light as 6 lb.  test – and small baits, spinners and other offerings.

I saw two anglers in one drift boat fishing the Sailor Bar riffle, but did not see them hook up any fish while I was there.

My fishing buddy, Rodney Fagundes, who I have fished with many openers together his drift boat, opted to head for the Chetco River with a friend on the opener. We experienced many excellent days fishing for steelhead from 2003 to 2013 while using plugs, spinners, Little Cleos roe and nightcrawlers.

On Wednesday, January 6, Roland Cabreras, Fish Sniffer columist, reported much improved fishing. “On the hatchery side, guys float fishing and tossing Litle Cleos spanked them. On my second cast yesterday on an 8 mm bead, my float went bye-bye,” he stated. 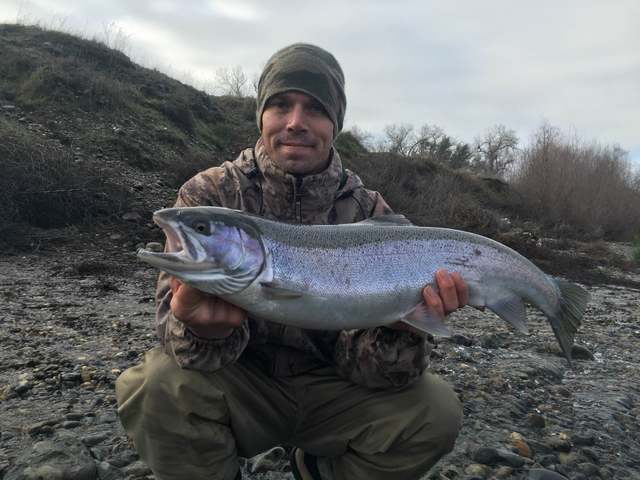 The number of steelhead showing now at Nimbus Fish Hatchery continues to be much better than last year, in spite of continuing low releases of 500 cfs from Nimbus Dam, accounting for the improved fishing. If the El Nino storms continue, expect to see a lot more steelhead move into the river when the flows go up.

Last season hatchery workers counted only 154 steelhead trapped at the facility from December through mid-March.

In contrast, the hatchery has trapped a total of 320 adult steelhead to date. ‘”We also released two wild girls and one wild boy,” said Gary Novak, Nimbus Fish Hatchery manager.

“There are lots of steelhead in the hatchery now. We’re seeing about 80 fish in the trap every Tuesday before we spawn,” stated Novak.

The hatchery has spawned 73 pairs and taken 491,717 eggs, well on the way to their goal of releasing 430,000 steelhead yearlings into the river system.

Novak’s working theory for the much larger numbers of steelhead seen this year is that many of the fish didn’t come back to the river and stayed out in the ocean for an extra year. Most of the fish seen at Nimbus are three-year olds in the majority of years.

This year there appear a larger number of four-year-olds than usual, but we won’t know for sure until the scale samples of the fish are analyzed. Most of the fish this season range from 8 to 12 pounds.

The hatchery workers continue to see larger amounts of eggs per steelhead female, 7,000 compared to around 6,000 eggs per fish last year.

The hatchery last year was able to take only 192,278 eggs the entire season. To boost the numbers of fish they raised, they obtained 168,838 eggs from Coleman Fish Hatchery, Novak noted.

This year CDFW staff will release 291,000 steelhead yearlings into the system.

American River steelhead are the largest ones found in the Central Valley system, due to their Eel River ancestry and excellent forage conditions found on the America. A fisherman tossing out a Little Cleo in February 2002 caught and released a wild steelhead/rainbow weighing 24.02 pounds, the largest ever documented on the American.

Genetic analyses conducted since then indicate steelhead from both the hatchery and the river are genetically more similar to Eel River steelhead than other Central Valley steelhead stocks.

In a presentation before the Save the American River Association in December 2014, Dr. Ribert Titus, CDFW Senior Environmental Scientist, documented how steelhead in the lower American River may be the “fastest growing trout” in the world.

“There is a lot of food in the American – the fish average a growth rate of.82 mm per day. They grow really well,” he said.

The American River steelhead population, along with its Chinook salmon run, constitutes a unique urban fishery in the shadow of the State Capitol that we must fight to restore and preserve.