That’s right –  loose lips sink ships! Big fish eat little fish and trout be they browns, brookies or ‘bows living in streams, lakes or reservoirs all gobble minnows with gusto. But let’s keep this information between you and I or everyone and their brother will be casting and pulling plugs and scoring big trout. And after all we want those hook jawed, slob gutted minnow munchers for ourselves, right?

At this point you probably think I’m talking about ripping big minnow plugs like size 13 and 18 floating Rapalas. While fast trolling big baits like these is a tried and true approach for hooking trophy size fish, that’s not what I’m focusing on. Fishing these magnum size plugs for trout is a bit like sturgeon fishing, the hookup and fights are awesome, but the waiting time between bites can be long and tedious. 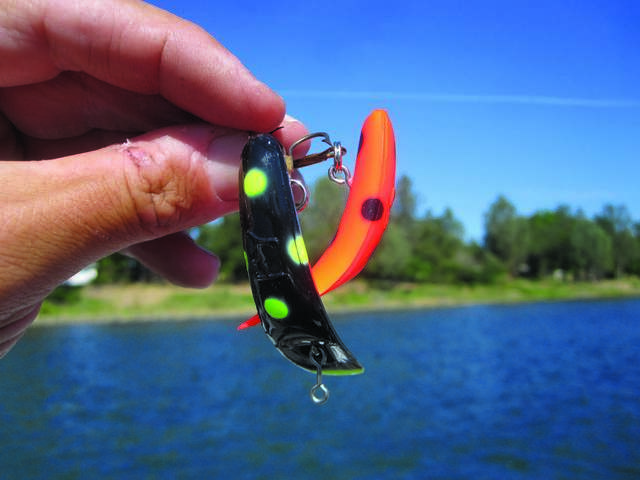 What we want to consider are smaller minnow plug and crankbaits that will catch trout of all sizes. Plugs in the one to three inch range are small enough to tempt pansize trout, but when you come across a big girl these plugs are substantial enough that she just won’t be able to pass them up.

It wasn’t long ago that John Merwin in the pages of Outdoor Life rated minnow plugs third in the list of all time best trout lures and if Outdoor Life says something it must be true!

In all seriousness, I don’t think any trout angler whether they fish streams or lakes from the bank or from a boat should be without a selection of minnow plugs, but they are only part of the story when it comes to trout plugs.

Short thick bodied bass fishing style crankbaits and boomerang shaped plugs like Kwikfish and Flatfish should also be part of the well heeled trouter’s arsenal. I never seem to have enough room in this column, so let’s quickly go over lures selection, tackle and fishing tactics relating to the category of lures that I refer to as “trout plugs”.

I like to fish my plugs on 8-pound fluorocarbon line. If I’m fishing a stream or casting at a lake I go with spinning gear. If I’m trolling, a conventional rig utilizing a level wind baitcaster gets the nod. Whether I’m using spinning or conventional tackle I like a rod with a soft tip. Trout have soft mouths and the soft tip helps to minimize lost fish.

My plug selection for fishing creeks and rivers is smaller than the selection I carry for lake and reservoir fishing. On the stream I like size 5 and 7 floating Rapalas in rainbow trout, silver/black and firetiger or orange. If the stream I’m fishing is exceptionally deep and swift I’ll sometimes add a few count down Rapalas to my selection, but as a general rule I’ve found that deep holding trout have no problem coming up to smack a Rapala working overhead.

For crankbaits, I rely on Shasta Tackle Flee Bitties, small Hotshots and Brad’s Wigglers in rainbow trout and orange over gold. When it comes to Kwikfish or Flatfish I like to have baits in red, frog and chrome/blue. 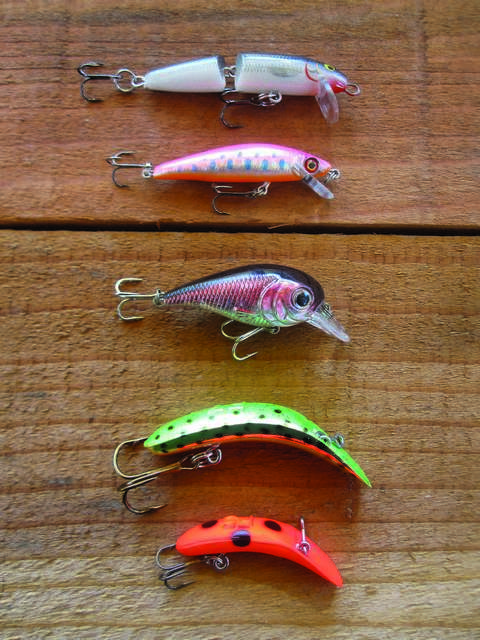 While all of these bait imitate minnows I fish them all differently. I use my Rapalas to cover water quickly. I cast them across and slightly down stream, allow them to swing across the current on a tight line and then retrieve them slowly. After one or two casts I move down stream a few feet and repeat. This approach works best in streams that are reasonably open that allow me to cover the water thoroughly and quickly.

I still use Rapalas on brushy streams, but in general I use crankbaits and boomerang plugs more. Since heavy brush prevents you from effectively walking and casting you have cover a lot of water from each opening in the brush. To accomplish this I tie on a crankbait and pitch it out a few feet into the middle of the current and close the reel’s bail. The plug will immediately swim to the near bank. I allow it to work there for several seconds and then begin feeding it line a foot or two at a time, giving it plenty of pauses to sit and work in the current. It’s amazing how many trout will dart out from under the bank and absolutely slam the bait.

If crankbaits don’t produce in this situation I tie on a Kwikfish or Flatfish and fish it the same way except I add a 10 inch section of 8 pound fluorocarbon tipped with a No. 10 woolly bugger to the eye where the lure’s rear hook attaches. The plug acts as an attractor/diver. About half the fish will be hooked on the fly while the other half will hammer the plug.

When bank fishing lakes or reservoirs my plug selection doesn’t change. Key locations to fish are points and anywhere water is flowing into the lake. These areas should be thoroughly worked via fan casting. In lakes where the main forage is shad, I like to employ crankbaits and boomerang plugs most of the time. If pond smelt are on the menu Rapalas tend to work better, but of course this is just a general rule. In reality Rapalas work just about everywhere.

And now we come to trolling. One of the reasons I really like minnow plugs and crankbaits for trolling is that they are baits that I can work quickly. Typically I troll them from 2 to 3 miles per hour. These baits work equally well when top lined or trolled from downriggers. When top lined you’ll want the plugs at least 150 feet behind the boat with 200 feet being preferable. When pulling them behind a downrigger you can shorten up significantly, although I still like to keep them at least 50 feet behind the ball. 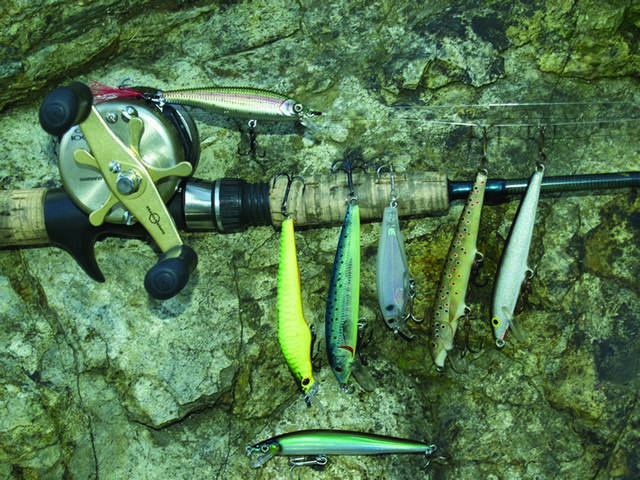 If fast trolled plugs don’t do the trick, breakout a Flatfish or Kwikfish. This style of lure was used extensively by our fathers, but trout in lakes and reservoirs don’t see them that much anymore, which is great…Curiosity killed the cat…er rainbow!

Boomerang plugs work best when pulled from 1 to 1.5 mph. If you want to get tricky don’t be afraid to pull the same woolly bugger trick I described for stream fishing. Sometimes it works well especially at locations like Eagle Lake and Lake Davis where the fish eat a lot of bugs.

Let’s wrap things up by considering color selection. All things being equal I like to run with natural colored offerings like rainbow trout or black over silver. When the water is murky that’s when I break out the firetiger and hot orange colors, yet there are always exceptions. I get a lot of photos working at the Fish Sniffer and a lot of huge trout are landed in crystal clear lakes like Pardee, Almanor and French Meadows on bright orange Rapalas.