“Three larger trout — 7.3, 7.4 and 6.88 pounders — were caught last week,” said Demmunik. “Two were taken from South Cove on PowerBait and the last was caught on a Rapala in Howden Cove.”

“Fishing for trout continues to be good with all the trout plants and cooler water temperatures,” said Demmunik. “They are being caught in South Cove and Oak Point as well as all around the lake. The baits of choice for shore anglers are garlic-scented PowerBaits, nightcrawlers or Kastmasters. Trolling is popular with anglers using Rapalas and other lures in the coves.”

Most striped bass being hooked now are undersized, under 18 inches.  “From shore, cut anchovies or shad are the top baits,” said Demmunik.  “We are still seeing many undersized fish being still caught for every keeper.”

“Most anglers were focused on stripers or trout although there have been many sightings of largemouths near the boat dock and adjacent fishing pier,” he said. “Senkos have been seen catching some nice fish in that area.”

The next monthly fishing clinic will be held at the Marina Saturday, Feb. 6 at 9 a.m. Learn everything you’ve wanted to know about lake fishing.

“Fishing topics rotate on a monthly basis and may be tailored to participants’ skill level,” said Demmunik. “From bait to knots to trolling and cleaning, our experienced staff can provide tips to help you snag a catch. Whether you’re casting for the first time or the thousandth, these clinics have something for everyone. Open to people of all ages.” 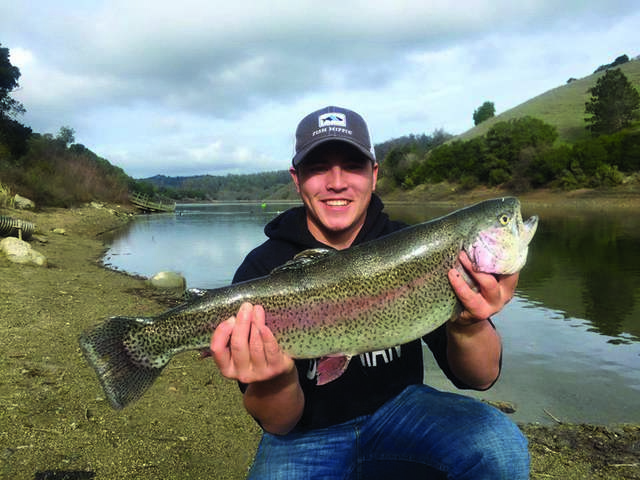 (Castro Valley) Trout fishing continues to improve at Lake Chabot as the reservoir rises from the storms that have pounded the East Bay.

“I’ve personally seen at least three trout limits in the past two weeks,” said Bonnie Frisvold at the Lake Chabot Marina & Café. “Power Bait and nightcrawlers are producing trout for bank anglers. The top spot is Indian Cove off the East Shore Trail.”

Trollers are hooking some trout also while using Rapalas.

“The lake level has come up 1 foot and should come up more with the storms we’re seeing,” said Frisvold. “The water temperature is in the low to mid-fifties.”

“Anglers are still hooking largemouth bass while fishing plastic worms behind the island and near the dam,” said Frisvold.

Some anglers have reported catching their limits of big, bold rainbows. For example, Tony Miguel Villanueva of San Jose caught his limit of trout – the largest was 5 lbs – on one trip. He again landed his limit of trout fishing off the 3rd dock on the following trip, according to Joe Sullivan of the East Bay Regional Park District.

Jose Garcia of Tracy caught a 4 lb. trout on PowerBait left of the 1st Dock. Another angler caught four trout left of the Stanley Dock on green PowerBait.

Note that there area special regulations for the Arroyo Del Valle Ponds, including catch and release ONLY and barbless hooks and artificial lures ONLY. Float tubes are the ONLY vessel permitted (no paddles).

(Livermore). Trout fishing at Lake Del Valle continues to improve with reports of limits being caught at the south end all the way to the dam from boats and shore.

“The water temperature is still holding at 49 degrees this week,” said Rowland. “We did have two fish plants this week, including 500 lbs of Mount Lassen and 2500 lbs  from the CDFW.”

The stripers have gone to deeper water. “If you can locate them, try jigging spoons, chatterbaits or large Kastmasters,” he tipped.

“Catfish have been quiet, but we expect them to be on the prowl after the rains that we have had,” Rowland said. “Largemouth and smallmouth bass have also gone to deeper water. They are being elusive, but can still be caught drop shotting plastics.”

Anglers of the Week include Dave Armagost of Pleasanton, who caught a 7.3 lb. trout in Badger Cove using white Power Eggs, and Ricky Garcia and Victoria from Livermore, who landed 5 trout using PowerBait by the marina. Robert Bryan from Modesto caught two rainbows weighing 5.10 lbs and 4.12 lbs. while using Power Worms at the south end of the lake.

(Fremont)  Trout fishing has held steady the last couple weeks and a few anglers are catching limits each day, according to Joe Sullivan of the East Bay Regional Park District.

“Jack Antrim of Hayward caught 14 trout while trolling from his rowboat on the backside of Horseshoe by the old boat ramp on a recent trip,” said Sullivan. “He kept a couple to eat and very carefully released the rest.”

Jose Jesus Gonzalez of Newark caught a limit of trout weighing up to 4 lbs.

“While most of the fish seem to be stacked up on the far side of the lake, Fishermen’s Row is still producing,” said Sullivan. “Raj Pradhan of Fremont caught two really nice-looking Mt. Lassen trout weighing in at 4 and 6 pounds.”

The park district stocked 750 pounds of rainbows in Horseshoe during the week of January 4l.