Folsom Lake, the Sacramento metropolitan area’s backyard landlocked king salmon, rainbow trout and black bass fishery, reached its lowest-ever water level in November 2015 when it plunged down to only 140,523 acre feet of water, 14 percent of capacity.

That surpasses the previous low water level of 140,600 acre feet reached in November 1977.

However, over the past two months the runoff from the long-anticipated El Niño storms in the American River watershed has improved water conditions at the reservoir dramatically.  As of February 2, the reservoir is  holding 545,444 acre feet of water, 56 percent of capacity and 107 percent of average.

Just to be clear, the record low level that the reservoir reached in the fall of 2015 was just not because of drought – it was because of the abysmal management of the reservoir during the drought by the U.S. Bureau of Reclamation in conjunction with the California Department of Water Resources (DWR).

Landlocked Kings And Rainbows Get Boost From Rising Water 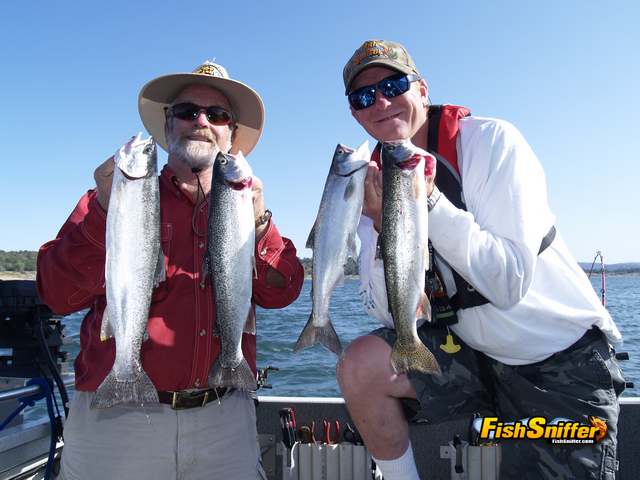 Fishing for salmon, bass and trout has been slow for the past month, due to cold, muddy water conditions, but it should get going strong after the water level stabilizes this spring and the water clears up. The rising water is expected to bring a lot of forage and nutrients into the reservoir, providing great conditions this winter and spring for king salmon, rainbow trout and black bass.

Last spring produced some of the best king salmon and rainbow trout fishing at Folsom Lake in memory. In fact, trout fishing has been good for both holdover rainbows and big kings during the last couple of springs.

For example, Rob Bundy, his five-year-old son Drew and James Netzel of Tight Lines Guide Service made a great trip to the lake last May. They caught their limits, including two kings weighing 4-1/2 and 7 pounds, and 13 beautiful holdover rainbows by 11 am.

Both the kings and rainbows hit Speedy Shiners, a favorite of fishermen at Folsom, trolled at 20 to 35 feet deep in the South Fork.

The king salmon in Folsom Lake now are a mixture of wild fish spawned in the South Fork of the American and fish planted by the California Department of Fish and Wildlife (CDFW).

This should be a good year for salmon fishing at Folsom, since decent numbers of the 99,990 inland Chinook fingerlings planted in 2014 and the 29,955 planted in 2015 should show in the catches.

The number of salmon available for stocking this season is in question, due to the relatively low Chinook salmon returns on the Klamath River’s Iron Gate Fish Hatchery where the triploid (sterile) salmon are raised.

“Our target is approximately 100,000 Chinook for Folsom, but the inland program always comes secondary to the mitigation allotment for the Klamath and we have to split the fish with the rest of the inland waters,” said Jay Rowan, Acting Senior Hatchery Supervisor, North Central Region-CDFW

“So in addition to having to have the fish to make the egg allotment, there also isn’t a whole lot of information out there on triploiding Chinook like there is for trout,” he noted. “The guys up at Iron Gate and the other facilities that are hatching and rearing these fish are doing a fantastic job writing the book on how to raise triploid Chinook, but as would be expected, there have been and will continue to be some ups and downs as they expand the science and refine techniques,” he explained.

“It wasn’t a fantastic year on the Klamath, so the numbers of fish available for the inland program are lower than normal,” he noted. “I’m not yet sure what our share will be for Folsom, but we should receive some salmon. The good thing is those 2014 and 2015 fish should be up to size and entering the creel this year.” 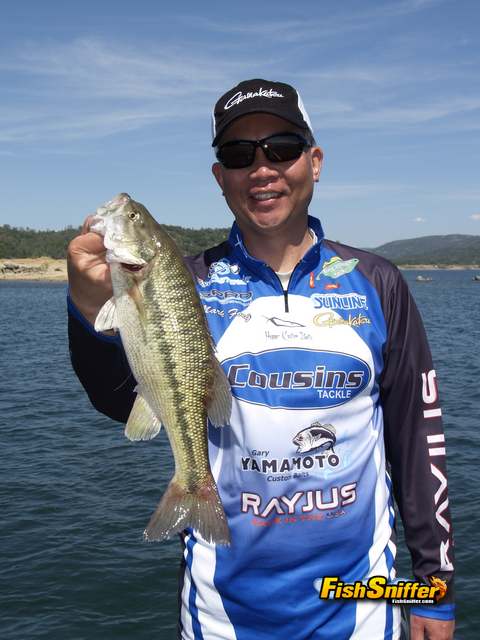 The lake also hosts a unique population of naturally spawning Chinooks, the progeny of salmon from the Nimbus Fish Hatchery.

Rowan said successful salmon spawning was first documented in 2009, when anglers began bringing in some small king salmon that obviously were the progeny of fish spawning in the forks of the American River above the lake, since the lake hadn’t been planted since 2006, due to the presence of IHN virus in the planted fish.

The CDFW did both snorkel and electroshocking surveys in 2010 that documented the king salmon going up the South Fork to spawn.

“We did a couple of electrofishing surveys on the South Fork and observed gravid (females headed upstream to spawn), “ he said. “We also did snorkel surveys and saw around 90 salmon in the stretch from the Salmon Falls Bridge up to Lotus, although we observes only two fish on redds.”

Rainbow trout plants planned in 2016, but numbers and timing in question

The rainbow trout found in Folsom are mostly a mixture of holdover and planted rainbows, along with some wild fish from the South and Middle Forks of the American.

Rowan expects Folsom to be planted with rainbows again this season, but when and how many fish are in question, due to the evacuation of the American River and San Joaquin River Fish hatcheries during the warm water and drought conditions last summer.

“With the evacuation of the American River and San Joaquin hatcheries, we had the Moccasin Creek Hatchery trying their best to hold 3 facilities worth of fish. Because of that and to some extent budgets, we’re short on overall numbers and particularly catchable size fish at American River Hatchery,” said Rowan.

“We were able to hold some 60,000 rainbows in the chilled water in the building and we transferred about 200,000 subcatchable and smaller fish up from Moccasin,” said Rowan. “Some are small catchables right now (almost 4 fish to the lb), but most are still too small to put out as catchables.”

“We also obtained about 2,500 lbs of catchables from Moccasin for urban lakes and kids events for this month and we’re working on getting about 25,000 lbs from a couple of the SoCal hatcheries to help us out with the high use waters that need winter/spring catchables. Folsom will be included in that,” said Rowan.

He added, “If we don’t have to evacuate again this year we’ll try and get some of our Eagle Lake Trout (ELT) fingerlings up to size and plant them in Folsom this fall as subcatchables.”

I have fished Folsom since I was 10-years-old.  It was where I caught my first bluegill and largemouth bass when I was a child – and I have caught hundreds of bluegill, rainbow trout, king salmon, spotted largemouth and spotted bass and channel catfish in the many years since I first fished the lake.

Let’s hope that the El Niño storms continue in force and fill up the reservoir, resulting in great fishing and boating conditions this coming spring, summer and fall! 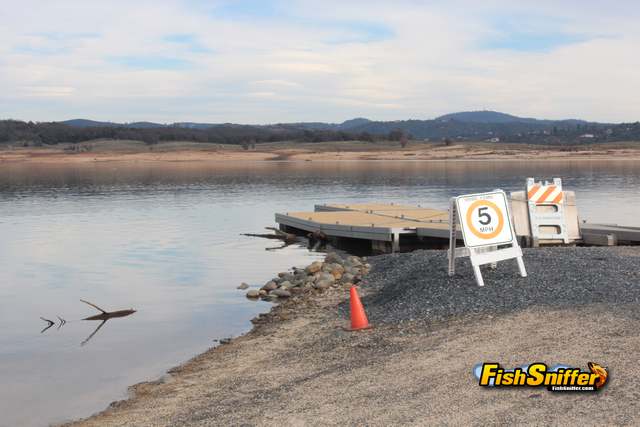 Location: Folsom Lake on the American River is situated in the Folsom Lake State Recreation Area about 25 miles northeast of Sacramento. The reservoir can be reached via either Highway 50 or I-80. Both Folsom Lake and Lake Natoma have many access points and entrances. The administrative offices are located at the base of Folsom Dam at the corner.

Park Entrances: The park has multiple entrances most of which are fairly easily accessed by either Interstate 80 to Douglas Blvd. (east), or Highway 50 to Hazel Ave., or Folsom Blvd., (north).

Size: The lake has a surface area of nearly 12,000 acres when at capacity with 75 miles of shoreline. The reservoir holds 977,000 acre feet of water when full. Folsom’s water level when full is 466 feet above sea level.