On Wednesday of our Alaska fishing adventure, we drove a little longer in order to catch our fish. We left the lodge at around 4 a.m. and arrived in Seward approximately 2 hours later.

We launched out of Resurrection Bay and took a 40 mile boat ride to the Gulf of Alaska. We saw a couple of Orcas on our ride out, passed several Glaciers including Exit Glacier which goes all the way to the water, and saw an island filled with sea lions.

Once we arrived at our first fishing spot, the captain demonstrated the fishing technique, how to play the fish and then put the first rod in the rod holder. Literally within 30 seconds, the rod barreled over and the first silver salmon was hooked!

The first drift took about 20-25 minutes where we had multiple hook ups with 5 fish landed but many others lost. Within that time, we were already at half our limit. We fished in approximately 220-240 feet of water, mooching for salmon with 3 oz. with a hoochie and piece of herring. With five anglers in the boat, we were fortunate to catch our 10 fish limit with no problems.

Once we limited out with salmon, we went on to rockfishing and lingcod.  In Alaska, the rockfish and lingcod limit is 4 fish per person. We limited out on rock fish with some quality sized fish weighing in about 8 pounds, including one very large yelloweye which was somewhere in the range of 20 pounds

The rockfish fishing was so good that when we were fishing for lingcod and bringing the jig out of the water there were two underneath it. It was pretty amazing to see. The lingcod were caught on 16 oz. lead heads and a curly tail, while the yelloweye rockfish was caught on a jig.

Some exciting highlights included sight fishing for salmon, catching the beautiful, bright orange yelloweye (my first ever), a lingcod that weighed in at 50 plus pounds and another lingcod around 40 pounds. 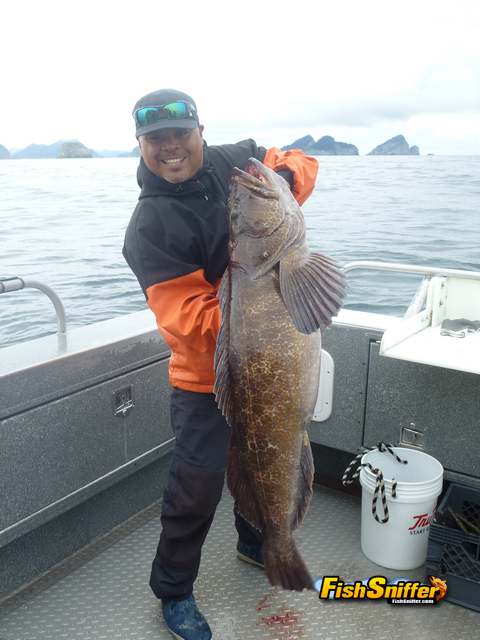 But the real story came toward the end of our day while fighting a third lingcod that, at the time, was approximately 20 feet away from the boat. This fish was hooked using 80 pound braid.

The angler was reeling in the fish when all of a sudden the line broke and we lost the fish! I kid you not, immediately afterward, within a second or two, an Orca breached about 15 feet from the bow of the boat.

This happened so quickly after we lost the fish we couldn’t help but question whether or not the Orca cut the line. Did he eat the lingcod? We’ll never know, but the timing of the events would make you believe that the Orca played some role in the line breaking and losing what seemed to be a very large fish.

Each day, just like the first, once back at the Salmon Catcher Lodge, we handed our coolers filled with fish to Terry and his crew who then cleaned, filleted and stored our fish in their huge walk-in freezer they keep on the premises. We, again, enjoyed a night relaxing, eating and discussing the highlights of our day, then getting our lunches prepared and clothes packed for the following morning. 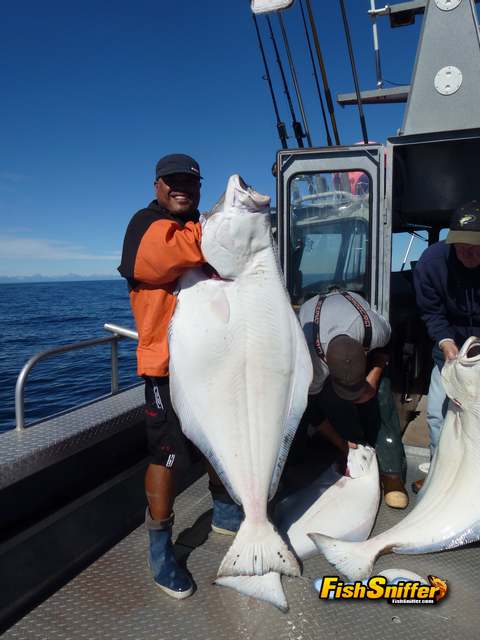 On Thursday we went silver and red salmon fishing on the lower Kenai River, which is located within the city limits of Kenai. We launched out of an area called the Pillars.

Our guides explained that we could’ve had limits within two hours but the challenge was that we wanted to catch both sockeye and silvers. The Alaska fishing laws state that once you catch two silvers you must stop fishing. The day started with wide-open silver fishing so we thought the bite would continue throughout the day. Unfortunately. that was not the case this time.

We each caught one silver and then took the opportunity to target sockeye. Unfortunately, the sockeye didn’t want to cooperate. Once we decided to get back to fishing for silvers, the sun had risen and the bite slowed significantly. We were able to scratch out two limits of silvers and a handful of sockeye that we threw back into the water. 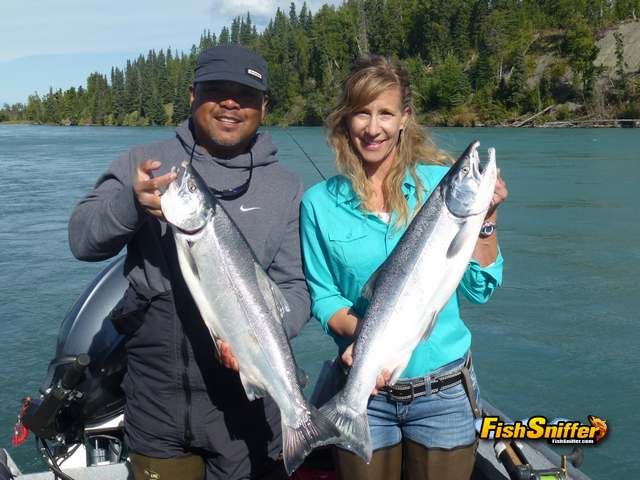 Some of the highlights of the day came when we saw a mama moose begin to cross in what looked to be a fairly deep part of the river with her two calves. They got about half way out only to have the calves turn right back around and return the side of the river they came from.

Mama moose wasn’t having any of that. She came back to where her calves were, and in our eyes, looked to give them a piece of her mind. Needless to say, mama moose and both calves crossed the river successfully.  Several boats that were running up river at the time had to stop to let them pass as well. It was quite spectacular to watch the entire event.

Another highlight was that we caught a beautiful rainbow trout that we released. This trout measured in at 30-1/2 inches long and 16 1/2 inches girth. Guessing it weighed 10-12 pound range.

We fished under several large trees, one of which housed a large bald eagle nest with 2 baby bald eagles and their mom. They were talking to each other throughout the day and soaring through the sky. This made just one more beautiful sight in Alaska.

Friday morning we drove up the highway about an hour and met our 2 guides. This was the first time our group of 5 would be separated. My wife and I were in one boat and the other 3 anglers were in another boat. We used a drift boat for about 9 miles in heavy winds in the refuge area of the Kenai River. 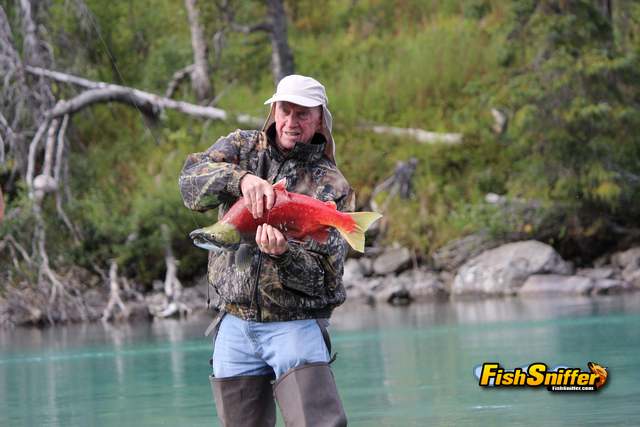 The fishing was fantastic as we caught many rainbow trout, with the biggest weighing in at around 8 pounds, and countless Dolly Vardens. We caught, took several pictures and then released each one of them. We were drifting beads with a fly rod as well as beads on spinning rods. In addition to the trout and Dolly Vardens, we also caught two silvers on a spinning rod. The silvers were approximately 6-8 pounds each.

All in all , our Alaska trip was one of the most memorable and amazing trips I’ve had the opportunity to experience. Each angler left with over 50 pounds of fish that included halibut, salmon, rockfish, lingcod and we each took some of the yelloweye home as well.

The weather was uncharacteristically beautiful with temperatures ranging from the mid 40’s to low 50’s in the mornings to the low to mid 60’s during the day. The weather cooperated so that we were able to complete all 5 fishing trips as scheduled. There was some question on a couple of the trips, as it did rain on us a little on some evenings.

The Salmon Catcher Lodge is a phenomenal place to stay. The accommodations are beautiful large log cabin style; it’s located close to downtown if you need necessities or if you want to venture out to any of the many restaurants either in Soldotna or in Kenai itself. They have packing, processing and freezing capabilities at the lodge. The Salmon Catcher also has a community room where you can play games, watch T.V., relax in one of their massage chairs or cook a community meal. 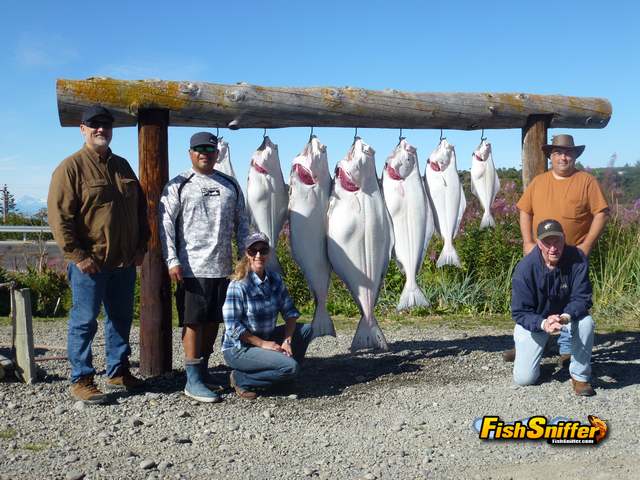 When people ask me how my trip to Alaska was, I respond, “Alaska is exactly as advertised.” Meaning it was everything I thought Alaska it would be and much more.

If you would like to experience Alaska I would highly suggest you plan to stay at the Salmon Catcher Lodge. Trust me when I say, you will not be disappointed.

This was my first time to this beautiful state and although I hope to make it back there sometime in the near future, if it happens to be my last time there, I feel like I was able to experience some of the best of what Alaska has to offer. Amazing is all I have to say, absolutely amazing!

If you would like to learn more about the Salmon Catcher Lodge or book a stay with them, give them a call at 907-953-2448 or check them out online at www.salmoncatcherlodge.com