While California offers anglers chances at some very iconic species of fish in some of the world’s most inspiring backdrops, in a lot of ways it’s planted rainbow trout that drive fishing in northern and central California.

That’s right, planted rainbows…day in day out all year long if you did a tally of all the anglers on the water, you’d find that a large percentage of them if not the majority of them have their sights set on planted ‘bows. 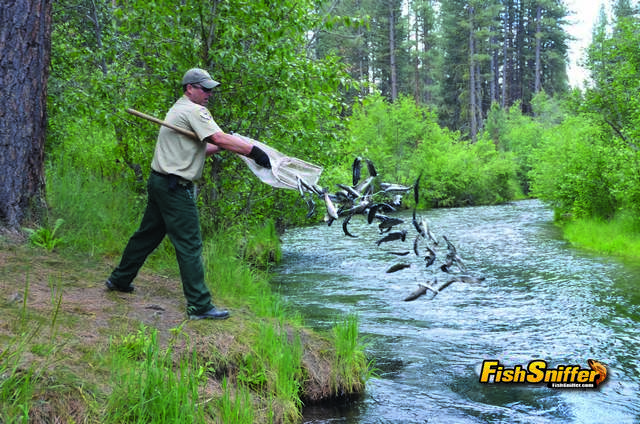 To understand the significance of planted trout, you need look no further than the success of PowerBait. Berkley has sold millions of jars of their colorful dough to anglers that want nothing more than a metal stringer sporting a limit of freshly planted “government trout”.

“The fact of the matter is, that if there aren’t planter rainbows in lakes like Rollins Lake there isn’t much to catch in them save for smallish spotted bass and a few big wary browns,” Jason Pleece of Meadow Vista recounted to me in a recent conversation.

He went on say, “Rollins used to be planted several times a year. Now I can’t remember the last time we had a plant. I know that there is a trout shortage at the DFW, but when I look at the trout planting data on the DFW website I get confused. If you look at the plants, most of them are taking place in southern California, why are we being excluded up north?”

Pleece’s comments rattled around in my head for a while and ultimately prompted me to seek out someone at the DFW that could shed some light on the state’s trout stocking program.

When I first reached out to the department I figured I’d end up speaking with an assistant to an assistant, but I actually ended up getting in touch with Dr. Mark Clifford, the statewide hatchery coordinator.

“There are many parts to my job, but when you boil it down I’m one of the guys that helps make fish for California anglers. Raising rainbow trout is an important part of what we do as is raising salmon,” Clifford related.

After exchanging introductions with Clifford, I got right to the point and tossed out two of Pleece’s questions as I think many readers of the Fish Sniffer Magazine share his concerns.

“Is there a trout shortage in California and why is southern California receiving such a high percentage of the trout being planted?” I asked.

“From a historical perspective I think it’s accurate to say that we are experiencing a trout shortage at this time. We’ve definitely faced some big challenges in recent years. The drought has really made raising fish difficult in many instances. We’ve also dealt with disease at some hatcheries and there are always budgetary concerns too,” said Clifford.

“You’ve mentioned Rollins Lake, so let’s use that as an example. The trout that would be planted at Rollins come from the American River Hatchery. For the past two years the American River Hatchery was completely depopulated in summer months to save whatever fish was on hand, from lethal water conditions. This was true for San Joaquin trout hatchery too, another of our largest production hatcheries,” he said.

“These hatcheries were forced to plant fish early, move fish to other facilities- whatever was necessary to keep fish from just plain dying from drought-impacted water conditions. As it takes 12 to 18 months to raise catchable fish from eggs, you can see how depopulating hatcheries and drought have greatly impacted production cycles. We are doing the best we can under these unprecedented conditions. American River trout hatchery last planted Rollins Lake in early July of 2015; we normally would plant for much longer into the year.  We simply have not had enough cold water available there to raise as many trout as we’d like.”

“As far as southern California goes, if you look at the plants taking place right now SoCal is getting the majority of the fish, but that’s really a seasonal situation. Winter is the only time that most SoCal destinations can be planted due to water temperature. As we get into late spring and summer you’ll see a shift. There will be less trout planting in low elevation SoCal waters and more planting up north,” related Clifford.

“Now that rain is falling in northern California and it looks like we’ll have a normal winter what does the future look like in terms of hatchery rainbow production?” I asked.

“Well, having plenty of cold water is going to help tremendously and we are working on overall hatchery efficiency too. Of course, everything we do has a large budgetary component too. We want to turn out as many fish as possible,  but we’ve got to stay within budgetary limits. In short, I absolutely think we are going to see improvement. We aren’t going to get back to full production overnight, but I firmly believe we will get there,” Clifford asserted.

My final questions concerned the economic impact of planted trout.

“As much as anglers love to catch planted rainbows, those fish also have an economic impact. Do you have any data detailing how much revenue trout plants create?” I asked.

“I don’t think we have any estimates for California, but I am aware of studies done nationwide by the USFWS and in other states such as Idaho. The consensus is that trout planting is really a cheap way of creating revenue. So trout plants do likely have a pretty broad economic impact and benefit here in California,” said Clifford.

My curiosity aroused, I asked what a planted trout actually costs the state.

“Of course there are individual variables at work, but our statewide average is about $4 a pound to raise, transport and plant fish, including maintaining broodstock for fertilized eggs. Many of the rainbows we turn out weigh in at about 8 ounces (2 fish per pound), so you can say that those fish have a hard cost of $2 each,” Clifford disclosed.

In closing I’d like to thank Dr. Clifford for taking time out of his schedule to speak with me. His job is complex and it sounds like he stays pretty busy.

In the final analysis things are improving on the trout planting front. So long as it continues to rain, we are going to be just fine. Fish need water, even “government trout”.