With five Fish Sniffer supporters all itching to catch a sturgeon aboard Captain Chris Smith’s Captain Hook, I didn’t even plan on picking up a fishing rod during the trip and in retrospect maybe it would have been better if I hadn’t.

It was just past lunch when the rod on the port corner started pumping. No one was close to it, so I slid it out of the holder and prepared to set the hook. As I stood with the rod in my hand feeling the faint, but strengthening tugs of a sturgeon, a gust of wind hit the boat and we started to swing away from the fish.

I wanted to play the bite out and wait until the sturgeon was really working on the lamprey eel before setting the hook, but I knew in a matter of seconds the swing of the boat would pull the bait away from the fish. I waited as long as I thought I could, reared back on the rod and missed the fish. As bad as it is to miss a sturgeon bite, it’s even worse to miss the last good bite of the day during a trip when the fishing has been tough. 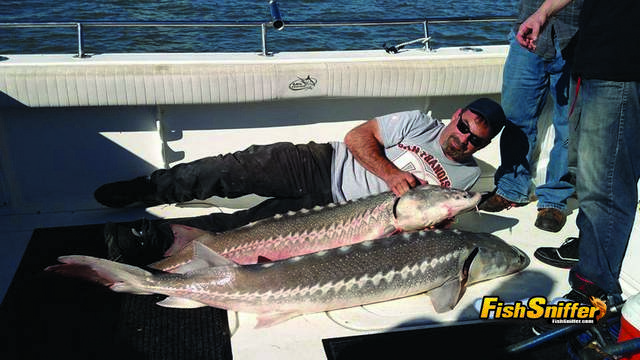 And, of course, there was the smack talk from Captain Chris, followed by some long distance ribbing from Hot Sheet author Dave Hurley when he called Chris’s cell phone for a fishing update. We didn’t have a fish in the box, but at least we were having fun!

Thursday, February 18 was one of those days when you drive into the Martinez Marina with mixed feelings. On one hand, we had a great tide with about 6 feet of movement. On the other hand, the sturgeon bite had been getting slower over the past several days, and a pretty violent storm had pushed through the north state overnight.

The forecast called for rain showers and wind. Rain generally isn’t a problem when you’re sturgeon fishing, but wind can be a real pain because it makes it difficult to see bites and execute hooks sets because the boat is constantly moving back and forth.

After motoring out of the marina, with a cooler full of beautiful lamprey eel, Chris headed down toward the Ozol Dock.

“We’ve got a couple hours of incoming tide left. There have been a lot of fish stacked up near Ozol, but they haven’t been biters. I’m going to anchor on the strongest concentration of fish and see if we can’t get one to go as this tide comes to an end,” related Chris as he cruised and searched for sturgeon with his Furuno sonar unit.

The sturgeon were there just like Chris said they would be. There were lots of them. Some were on the bottom and seemed to be feeding, while the majority were cruising around off the bottom.

It didn’t take Chris and his son and deckhand for the day, Jonathan, long to bait up a half dozen rods with eel and pitch them out. Let the waiting begin!

Actually there wasn’t much waiting at all. We’d probably been fishing for 20 minutes when the first sturgeon of the day dropped in. There was no pumping the rod or nibbling the bait. The bite was a total suicide job. One second nothing was happening, the next second the rod was bent sharply against a fighting fish.

The only problem was that when the fish came to the boat, it turned out to be a few inches short of being a legal keeper.

Our spirits were buoyed, knowing that the sturgeon were indeed biting. We only had to wait another 10 minutes or so for the next hookup. This time Jonathan was standing right next to a rod when it started getting hit. Jonathan was on the rod like a cat, waited and then drove the hook into solid weight.

A beat after passing the rod off to one of our anglers the sturgeon rocketed out of the water and we could see that it was very close to being a keeper. After a short fight the fish came aboard, but to our frustration it turned out to be about a half inch short.

No big deal, the bite was on and we’d landed a pair of sturgeon in the first hour or so. It would be just a matter of time until we boated a keeper or two. At least that’s what we thought.

After releasing the second shaker, one more 24-inch sturgeon was hooked and released before we lost the tide.

For the rest of the day we made several moves. We tried to head down into San Pablo Bay, but it was too windy. We sampled the Napa River and found sturgeon, but they proved to be uncooperative.

Heading back up to the Benicia Bridge we tried both above the bridge and up in the shallow water above the Moth Ball Fleet without success.

Despite the lack of sturgeon the afternoon was fun. We talked and laughed. A couple guys snoozed a bit and we were treated to a yummy lunch of BBQ burgers, brats and homemade cookies!

Since it was a Cal Kellogg School Of Fishing Adventure, everyone took home a Fish Sniffer hat and the anglers that landed the two largest shaker sturgeon took home new fishing rods courtesy of PENN.

Chris is planning to keep the Captain Hook headquartered in Martinez and continue to hunt for sturgeon through the end of March. Come April he’ll be relocating to the Berkeley Marina where he’ll begin chasing halibut in San Francisco Bay and salmon beyond the Golden Gate.