(Orangevale) At first glance the American River appears to most as a slow, lazy river that winds through the heart of Sacramento area.

However, there are drownings each year, most of which occur during the spring and summer when the river sees the highest amount of traffic.

During the colder months, fishermen are the most common users of the river as they chase salmon and steelhead as they make their annual migration to spawn.

I frequent the river chasing both species and while I can safely say that I’m privy to many of the hazards, I was recently reminded that you can never be too careful.

During a steelhead fishing session on the morning of Thursday February 4th at Nimbus Basin, I made a move to a section where I had caught fish in the past. It was only 8:00 and I already landed one bright hatchery hen that I kept and also lost two others. But my goal was to perhaps land one more fish on the morning and head home. 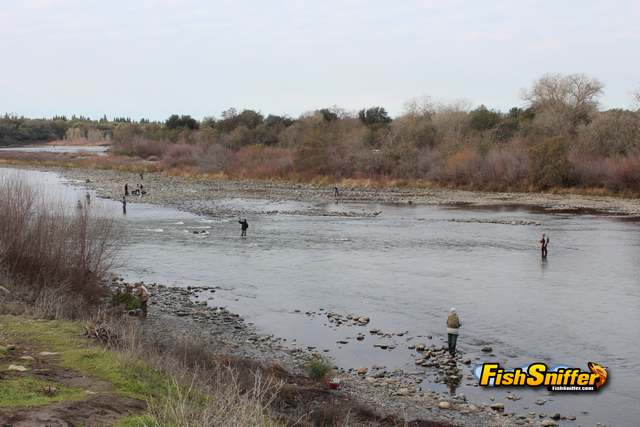 Wading on the edge of a shallow bar, I took a step and could not find bottom. My body lunged forward and instantly I was swept downstream struggling to stay afloat.

I dropped my rod as my instincts to survive took over. I attempted to swim towards the direction in which I came, quickly realizing that I would spend far too much energy in the effort.

Instead, I swam towards the opposite shoreline but I found that the combined weight of my winter clothing, waders and hip pack were weighing me down. Instead of trying to freestyle swim, I laid on my back and tried to relax.

Out of the corner of my eye, I noticed that an angler on the opposite shoreline was moving towards me, but I was starting to sink, as my waders were  starting to fill with water.

The angler began casting his float in my direction, but after several tries I began to panic as I was starting to swallow water and my face was starting dip below the surface.

In the knick of time, the angler’s float flew across my right arm. I grabbed hold of the line and wrapped it around my forearm. He cranked down and I could feel the drag on his reel give away under the heavy load of my body. But, I felt myself inching towards the shoreline.

“Can you feel bottom yet?” he yelled to me.

I stretched my legs down, and felt land.

The angler ran over to me and helped me out of the water, removing my hip pack to relieve me of the extra weight. My muscles were tense and I was barely able climb up the clay bank, but I made it, thanks to the angler saving me.

Dazed and confused with a pounding headache, it took me a moment to process what he said.

“I think I’m good. I just need to regain my strength and rest for a minute. Thank you,” I said.

The angler, who later revealed himself as Paul, walked off after a firm handshake to continue chasing steelhead.

“I’d walk across the bridge and not across the river this time,” he joked.

I waved back and nodded. “Thanks again Paul!”

After resting for a few moments, I took off my soaked sweatshirt, then my waders. The legs had collected a few gallons of water, which was difficult to strip due to the weight. I was immediately overcome by fatigue after the process, having to rest to regain my strength.

My headache started to get worse, and my vision started to cut in and out. Calling 911 was starting to sound like a good idea.

However, instead of calling 911 I mustered up some strength. I gathered my gear, and started scaling the steep clay bank towards the bike path above the Basin.

I stopped several times to rest, but I eventually reached the bike path then the sidewalk on the Hazel Avenue Bridge. I walked across the bridge back to my car.

I slowly got inside, started the engine and blasted the heater.  I reclined my chair, closed my eyes and began to reflect.

I was thankful to be alive and safe, but several variables that morning tilted in my favor. If any had tilted the opposite direction, I may not be here writing this article.

Wading Belt – An essential piece of wading equipment; its used to slow the entry of water into your waders should you fall in. What’s funny – I thought about leaving it behind before I began fishing on Thursday.

Hip Pack – Made by Simms, called the Headwaters Hip Pack, acted as a floatation device. When I reached the shoreline, I found that the pack did not take in any water.

Flows – The flows on Thursday were sitting around 810 cubic feet per second (cfs). On Friday the 5th, they were increased to over 1,700 cfs. Imagine my fate had I fallen in on Friday instead.

Paul – If he hadn’t been there to reel me in, I’m not sure If I could have floated long enough to reach the shoreline.

The drive home was filled with more reflection. When I got home, I promptly took a hot shower to defrost my body. I slept for most of the afternoon, as I felt extremely weak. I didn’t fully recover and feel myself again until later that evening.

Moral of the story – take extra care when wading on the American River or any river. Take along a friend when you can, and always wear a wading belt even if you don’t planning on wading deeper than your knees.

On Friday morning, I received word from my good friend Mark Lynn that he found my centerpin rod and reel combo downstream from where I fell in. You can imagine how ecstatic I was when I got his call.

I also got in touch with Paul – the good samaritan and angler that saved my life on Wednesday morning.

“I owe you a lifetime supply of beer or steelhead intel, or both,” I said.

“I’m glad I was there to help. Lets hook up some time on the river,” Paul replied.