(Byron) You never know what you might catch when you go trout fishing at Los Vaqueros Reservoir.

Jjust ask Gayle Greer of San Jose, who landed a 23.9 lb striped bass, according to Brian Demmunik at the Los Vaqueros Marina. He was fishing PowerBait from shore in the south cove when he hooked the fish.

“Were seeing a lot of small stripers from 15 to 17 inches long, along with some 20 to 23 inch keepers,” he said. “They’re hitting cut anchovies and shad.”

The trout fishing is going strong at Los Vaqueros, though not as hot as during the previous week. “Most people are catching a few fish, but we’re not seeing as not as man limits as the week breofere when everybodyo limting out,” said Demmunik.

“Anglers are mainly using crawlers, garlic PowerBait and Kastmasters,” he noted. “We’re seeing the top action in the South cove and the Peninusla Cove.”

Big trout honors go to Alex Xavier of Hayard, who landed a 7.57 lb. rainbow while was using a Rapala in Peninsula Cove. Bryer Smith of Santa Cruz bagged a 6.69 lb. rainbow while fishing a Kastmaster in South Cove.

Finally, Martin Villafuerte of San Jose was casting a Roostertail in South Cove when he caught a 7.19 lb. trout.

The water level is currently at 82,100 acre-feet, about 50 percent of capacity. The water temperature is 54 degrees. The water clarity is fair with some creek run-off clouding up South Cove and Cowboy Cove.

(Antioch) “The trout bite is on for boaters,” said Marcella Shoemaker of the Rocky Mountain Recreation Company. ‘The best spots are the Rock Wall, Sandy Pointand Scow Canyon. I have seen anglers trolling out here with not much luck; bait fishing is the best bet.”

Mice Tails, PowerBait and worms have been the most successful colors are chartreuse, spring green, green pumpkin, and the garlic scent. The Main Rec. Area, the Pines and the Oaks are also producing plenty of fish.

Jason Joshau of Oakland landed 5 trout up to 7.3 lbs while using worms in Scow Canyon. Steve Reaves of Richmond caught a 6.3 lb rainbow while fishing in Scow Canyon with PowerBait.

The lake level is 297.5 feet in elevation and the surface water temperature is 55 degrees. The latest plant featured 900 lbs of Mt. Lassen Trout.

(Lafayette) Fishing is starting to pick up, while the reservoir has received 11,350Lbs of planted trout for the season to date. “As the weather seems more spring like, the fish are starting to react,” said Richard Lovato of the Lafayette Recreation Area.

“Ed Warren pulled out a 4.15 lb. rainbow trout at Harry Cove with Power Bait. Effren Tumbaga Jr caught a 10.3 lb. trout using PowerBait from the shore by the cove. And numerous others are relaying their catches,” Lovato stated. 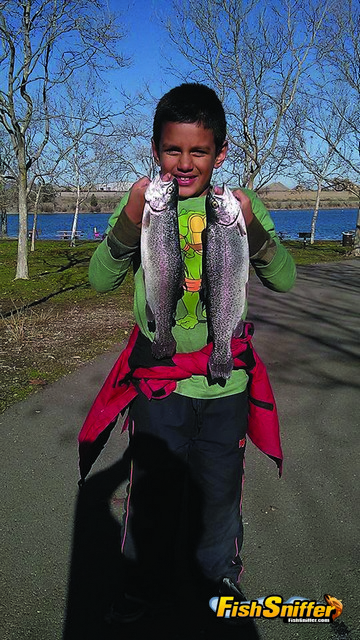 (Pleasanton) Anglers have reported catching trout off the shoreline, including the Stanley Dock and surrounding areas, as well as from kayaks around the lake, reported Joe Sullivan of the East Bay Regional Parks District.

Joey Hendricks from Pleasanton caught a beautiful-looking trout trolling the main lake with a tiny worm on a Rapala floating. Willie from San Jose caught a 5.7 lb. rainbow using a Kastmaster near the second dock. Steve and Jeremiah Molina caught a 7.5 lb. trout from the shoreline.

The CDFW stocked Shadow Cliffs with 1000 pounds of rainbows the week of February 15. 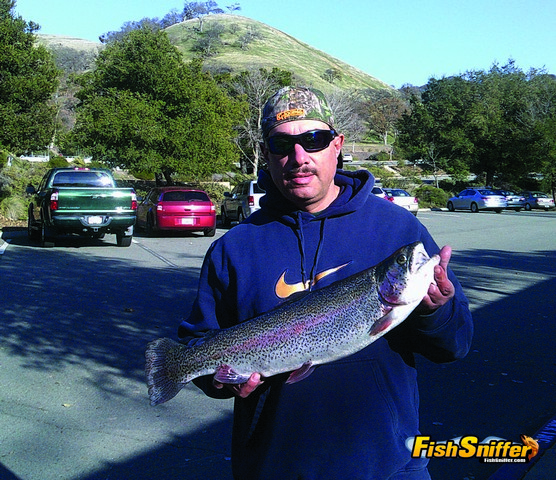 (Livermore) The most exciting news from Lake Del Valle is the capture of a new lake record channel catfish. Ricky Garcia of Livermore caught a 34 lb. channel catfish while using anchovies in the Lower Narrows, reported Tim Rowland of the Rocky Mountain Recreation Area.

And that wasn’t the only monster fish caught in the reservoir lately. Michael Hollister of  Fremont landed  a striped bass weighing 31.81 lbs while using a nightcrawler by the West Beach.

“The spring like weather has brought the lake temperature up to the mid 50s,” said Rowland. “The water clarity to around 6′. Trout plants are holding strong,”

“This week we have seen some nice sized stripers. The best baits to use for stripers are anchovies, chicken livers, shad and mackerel. If you are here and you see a striper boil, you will need to use top water lures.”

“Trout fishing is holding steady both by boat or shore,” said Rowland. “Anglers are being rewarded by getting their limits all throughout the lake. Most anglers are fishing in the shallow water.”

“The best baits to use have been Mice Tails; you might try jigging them for the best results. Power Worms, PowerBaits and Power Eggs in all colors and also nightcrawlers, with a little air injected into them, will work also. The top lures include gold Kastmasters, Rooster Tails, Rapalas, and Panther Martins,” he stated.

Big trout honors go to Christie Apostolo of Cupertino, who a bagged a trout weighing 5.66 lbs by fishing a Kastmaster on the East Beach

Currently the boat ramp and fishing pier are both open and the water is on the rise. Note that the use of lead fishing tackle is prohibited at Quarry Lakes.