(Oregon House) The spring trout plants have begun as Collins Lake continues to rise from the storms. 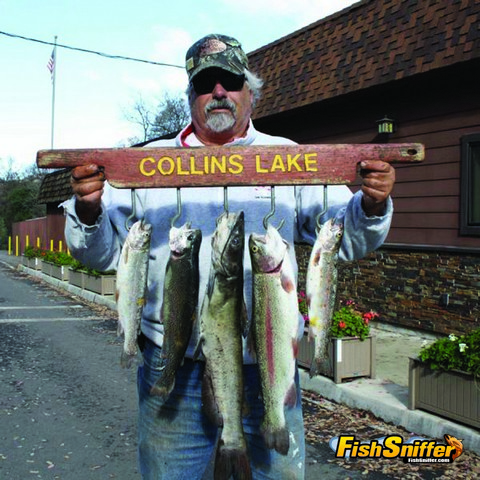 Collins Lake has risen 46 feet since November. The lake level is now only 22 feet from full, coming up from a low of 68 feet from maximum pool.

“We planted our first load of 1800 pounds of trout, including trophy trout, on February 12,” said Lincoln Young, owner of the Collins Lake Resort. “We plant to stock around 32,000 pounds of rainbow trout this spring, the same amount we planted last year. In March, we’ll stop up the plants to once a week.”

“The trout fishing now is good, but not hot for shore anglers and boaters using both bait and lures,” said Young. “With the plant and the increasingly clarity of the lake to 2 to 3-1/2 foot of visibility, fishing was solid over Presidents Day weekend. However, the visibility has gone back to 1 to 1-1/2 foot visibility this week with some windy days.”

Noah, Michael and Steve Slongorth-Douglas teamed up to bag a stringer full of rainbows ranging up to 4 pounds while soaking PowerrBait. Tom Pickett also nailed a 4-1/2 lb. trout while tossing out a Rapala from shore.

Natalia and Mikayla Smith and Skyla Buchanan caught 10 trout from shore on an inflated nightcrawler/with PowerEgg.