(Brannan Island) Excitement is running high in the West Delta. The sturgeon bite has been fair to good, depending on the day and the spring striper run is just getting started.

Captain David Hammond of Delta Pro Fishing has been trolling for stripers in the West Delta. Limits and near limits have been the rule. Hammond is primarily pulling Yo-Zuri Crystal Minnows for his fish. 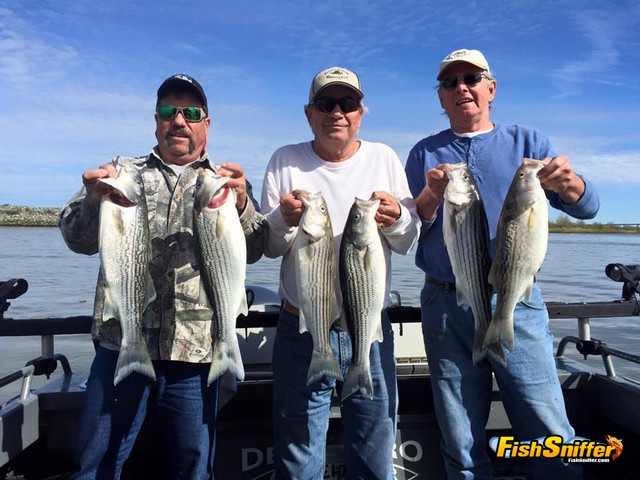 Bait anglers have been getting in on the striper action too, while fishing the edge of the channel off Decker Island. The best bait has been frozen shad, but sardine fillets are yielding results too.

For sturgeon anglers are fishing from the Power Lines on the Sacramento all the way down to the Moth Ball Fleet in Suisun Bay. One of the best spots has been the area around Roe and Ryer Islands, but there have been good numbers of keeper and oversize fish being caught in Suisun and Montezuma Sloughs.

Eel has been the best bait for sturgeon, but salmon roe is producing some fish too. Grass shrimp has been nearly impossible to get, but ghost shrimp are available at some shops.

“I’ve been targeting sturgeon out of the Pittsburg Marina,” related Captain Steve Mitchell of Hook’d Up Sportfishing. “We’ve been dealing with quite a few jumbo shakers and there has been some grass in the system in recent days that isn’t helping the cause too much. The good news is that the water remains stained and the temperature is inching up. Warm stained water this time of the year typically results in epic sturgeon action. I think the bite is going to come on strong soon.”