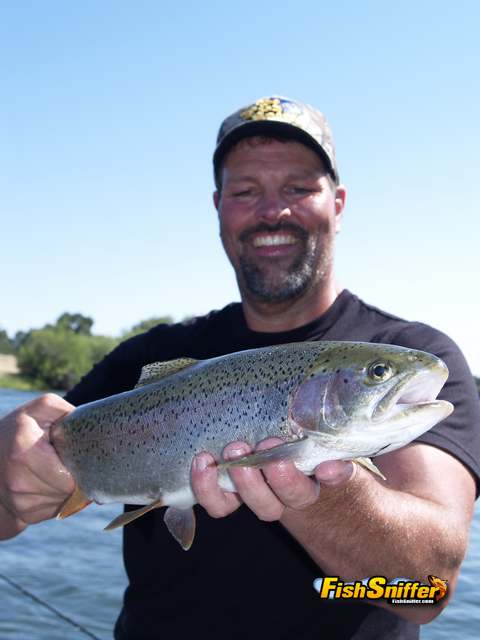 By the numbers, trout are the West Coast’s most popular species of gamefish. In addition to their beauty, trout enjoy a broad distribution that few other West Coast gamefish can match. Trout are at home in pristine high country streams, foothill reservoirs, urban ponds and just about everywhere in between.

Undoubtedly, one of the most important factors driving the popularity of trout among anglers is the fact that they are willing strikers that can be caught using a variety of different techniques. I like to call trout equal opportunity gamefish because both bank and boat anglers achieve a high level of success while targeting them with a long list of offerings including spoons, spinners, plugs, flies and smorgasbord of natural and made man baits.

Certainly we all love catching trout on lures, but day in day out its bait that yields the most consistent results. When the going gets tough or even when it’s not, break out the bait and you’ll be well on your way to filling up your stringer with tasty rainbows.

With spring trout fishing breaking loose in lakes and the stream season slated to get underway on April 23, this is a perfect time to ponder the core baits that no Golden State trouter will want to be without.

Three decades ago, worms, salmon eggs and soft cheese were the kings as far as trout baits were concerned, and then it happened. Floating dough baits arrived on the scene and things haven’t been the same since. PowerBait is the most popular and certainly one of the most effective of these convenient putty like concoctions.

When PowerBait first came out my buddy Red and I each picked up a bottle of orange dough. We didn’t give the bait a try for quite a while. Finally we were fishing at an urban lake on one of those days when nothing seemed to be working. I put a small ball of the bait on a slip sinker rig and pitched it out not expecting to get a bite. Well, the rig didn’t even have a chance to hit the bottom, before a feisty rainbow grabbed the dough and took off. Over the next two hours Red and I had a fantastic time, catching and releasing 27 trout. From that day forward, I’ve never doubted the effectiveness of Power Bait. It is something that should be in every bait angler’s bag of tricks.

Over the past several years I’ve played around with dough baits from other manufacturers. I’ve had good results while using Pautzke Fire Bait and exceptional results while soaking Zeke’s Sierra Gold. 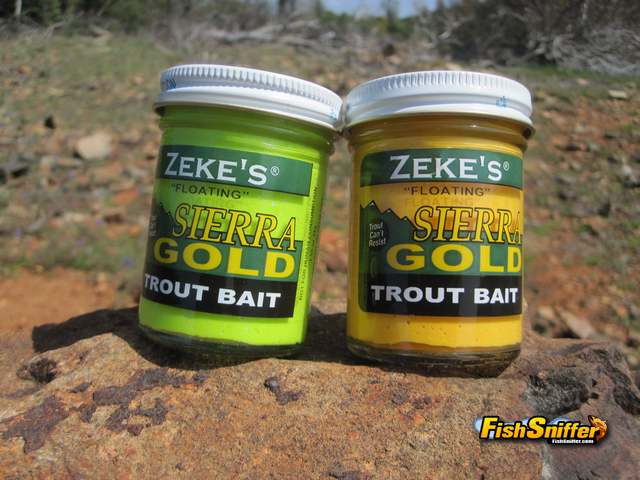 Sierra Gold features a special combination of scents, amino acids, glitter and vibrant colors. The bait has a soft, but elastic texture that easily molds and holds to your hook. Won’t easily cast or wash off when fishing. Powerful scent and flavor attractors slowly release into the surrounding water to attract trout from near and far, stimulating fish to strike.

Both PowerBait and Zeke’s Sierra Gold Bait come in a long list of colors and combination colors. Most dough baiters have a handful of colors that they have a lot of confidence in and as a result they use these personal favorites almost exclusively. Rainbow is very popular as is chartreuse. My strategy is to keep things simple. I like to have chartreuse and orange colors on hand for stained water and subtler yellows and pinks when the water is clear. The nice thing about dough bait is that it’s relatively cheap so you can afford to carry solid selection of colors.

If I were restricted to one color and one color only of dough bait, I’d probably go with yellow. That’s my personal confidence color and a good percentage of the dough bait trout I’ve caught over the years have come on yellow bait. This is likely because I generally start out with a yellow ball of dough…Your mileage will likely vary!

The spin angler can take plenty of trout on flies and lures, but artificials can’t compete with the effectiveness of natural baits. Stream trout are opportunists by nature and will take a wide range of natural baits, in fact any small organism found in the stream or that falls in the stream might just find itself residing inside a trout.

The floating dough baits used in lakes certainly are capable of taking stream trout, but I shy away from using them. In lakes, you typically want your bait floating up off the bottom. In streams you want your bait moving along the bottom, which is a difficult presentation to make with a bait that floats.

I use a few different baits when targeting stream trout. Worms are my favorite. The baby night crawlers found at tackle shops are great, but smaller “garden worms” that I dig myself are even better. I’ve tried red worms and while they will catch trout I’m not a big fan of them. They are too small and too fragile for most applications.

Depending on the size of the worms I’m using, I pin them on either a No. 8 or 10 bait holder hook. A lot of anglers make the mistake of balling their worm up on the hook. This results in a lifeless worm glob. A better strategy is to lightly pin the worm on the hook. This way as it drifts along it is able to move and wriggle, resulting in a much more natural looking presentation and correspondingly more hookups.

Running a close second to worms in my stream trout arsenal are crickets. Trout love crickets and grasshoppers, so they are a wonderful choice. The crickets I buy generally come 50 at a time in a brown tub with a chunk of potato in it for the crickets to feed on.

Trout, especially rainbows, seem to be genetically wired to eat salmon eggs, since both hatchery trout and wild trout living in streams that don’t have a salmon run will readily gobble up salmon eggs, despite the fact that they have never seen one before. The first trout I ever caught came on a salmon egg and I’ve caught countless others on eggs over the years.

There are several different brands of both natural and man made salmon eggs and salmon egg imitations on the market today.

The folks at Pautzke have been turning out top quality eggs since the 1930’s and the their iconic Green Label red eggs have been the undoing of millions of trout over the years.

Recently I’ve been playing around with Scented Eggs from Atlas-Mike’s and biodegradable protein eggs from Magic Products. 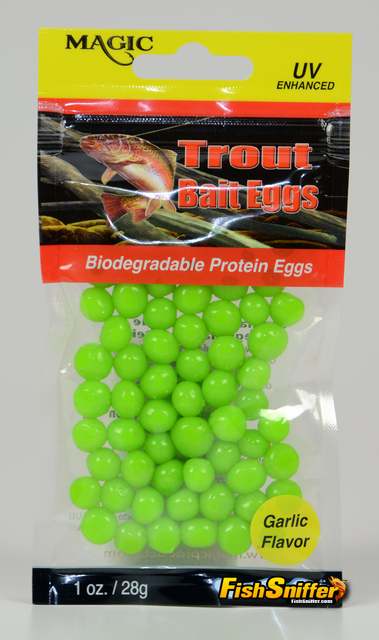 Atlas-Mike’s eggs come in a number of different scents including cheese, shrimp, garlic, night crawler and corn. They all work well, but my hands down favorites are cheese and shrimp. When trout grab these they don’t let go!

The Protein Eggs offered by Magic Products are very interesting. The Magic Products Team describes the eggs as “simulated salmon eggs”. The eggs are made from biodegradable protein. These eggs are clean, easy to use and stay on the hook very well. They retain their color and flavor while slowly releasing scent into the water to attract trout. The eggs are available in a variety of scents and colors.