The Russian River in Sonoma and Mendocino Counties is one of the most legendary fishing streams in California.

For over 100 years, the scenic river that courses its way through both vineyards and redwoods has drawn anglers from the Bay Area, Central Valley and elsewhere in California and the United States to fish for an array of species, including steelhead, Chinook salmon, Coho salmon, striped bass, smallmouth and largemouth bass, bluegill, channel catfish and other catfish, American shad and even white sturgeon. 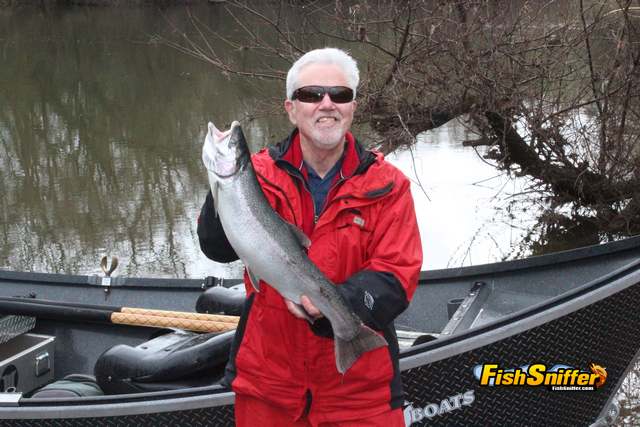 The river’s abundance of fish, both native and introduced, is celebrated in a number of books, including Meghan Walla-Murphy’s “Fishing on the Russian River,” Russ Chatham’s “Rivers of A Lost Coast,” and Ben Taylor’s, “I Know Bill Schaadt.”

The abundance of fish in the Russian in the 1950s and 1960s is illustrated by a photo in Ben Taylor’s book that shows the legendary fly fisherman, Bill Schaadt, and his fellow anglers Homer Wilson and Bob Nauhrim posing with three fish limits of huge steelhead from the Russian River steelhead, along with a limit of monster striped bass. All of the fish in this photo were caught on fly rods. 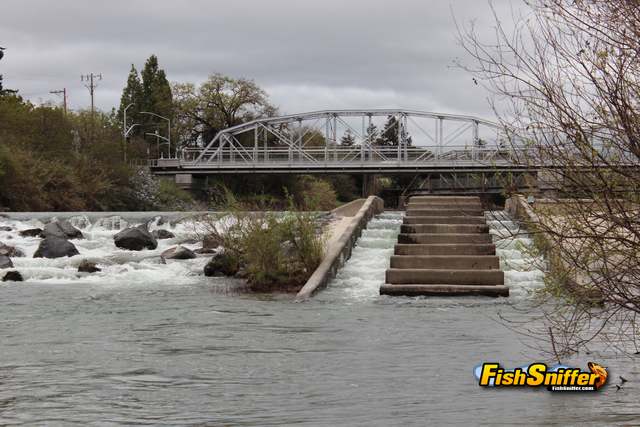 The impacts of heavy agricultural use, especially with the expansion of heavy irrigated vineyards, the rapid expansion of Santa Rosa and its suburbs, groundwater depletion and the legacy of decades of logging and gravel mining have also taken their toll.

In spite of the fishery decline from the heydays when Grant King, Bill Schaadt and others landed huge numbers of steelhead, stripers, Coho salmon and Chinook salmon, the Russian is still one of the better steelhead rivers on the California coast.

Russian River steelhead fishing has been productive this season, as evidenced by a drift boat trip that I made with Steve Jackson, owner of King’s Sport & Tackle, and Dave Delmue, who works at the shop, on Thursday, February 18.

On the day before, the two anglers and another fisherman ended up hooking six and landing adult steelhead in the 7 to 9 lb.range. “All of the fish were downrunners (downstream migrants) except for one beautiful hatchery fish that we caught,” he said. 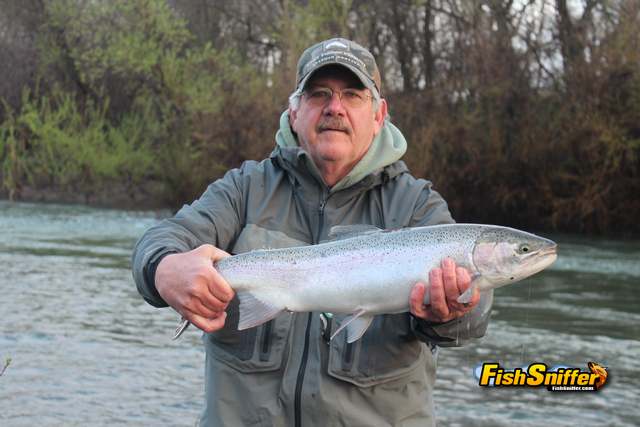 I met the two anglers at the Cottages in Rio Nido along the Russian River at 6 am. I had a hard time sleeping the night before, since I was so excited about going out steelhead fishing, one of my favorite things in the universe do.

After picking up our shuttle person, Chelsea Bacon, at Steelhead Beach at Forestville, we drove down to Veterans Memorial Park, where the infamous Headsburg Dam stands. It took years of lawsuits and political pressure, but United Anglers of California finally forced the County to construct a modern fish ladder on the dam.

“We’re going to pull plugs first and then start side drifting roe,” said Dave Delmue, as he began rowing downriver.

We first hooked up several smolts in the 10 to 11 inch range on the plugs. Though fun to catch, they weren’t what we were looking for. We began side drifting bait, salmon roe, with orange puffballs on slinky rigs. As we drifted through Bud’s Hole,  I got a bite, set the hook and suddenly had a very fresh steelhead on the line.

The first fish raced rapidly upriver and then downriver, then rushed towards a set of willows. “Don’t let the fish get in the willows!” Jackson exclaimed. But the fish did exactly what he feared it would do – it went right through the willows into a side channel. 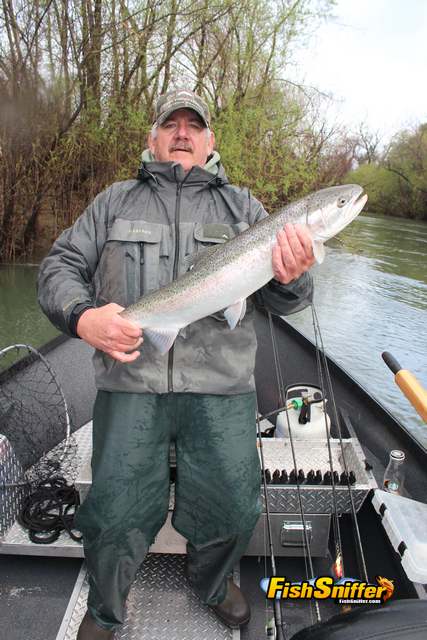 After making a mad rush towards a set of small rapids, we got the stubborn steelhead in the net. It was a beautiful hatchery steelhead weighing 8 pounds, and I decided to keep it, recording the catch on my steelhead card.

We kept going down river and Jackson soon hooked up an acrobatic fish in Willow Run. The fish was so hot that it was hard for our eyes to keep up with it as it zig zagged up and down the river. It was probably the hardest steelhead fight that I’ve seen in years, make a series of leaps.

Amazingly, after Delmue netted it, the hard-fighting fish turned out to be a downrunner hatchery female, long and sleek after depositing her eggs, weighing around 9 pounds.

We hooked one more adult steelhead, another bright downrunner. Unlike the previous two, this fish came in fairly easily and Delmue released it back into the river after netting it.

After that we didn’t hook any more fish. The weather changed from sunny and calm, to cold and windy, to rain showers. We passed a number of popular fishing spots as we drifted down the 8 miles of river, including the mouth of Dry Creek, Miraabel, River Bend State Park and Wohler Park until we finally arrived at Steelhead Beach. Our tally for the day was 3 adult steelhead hooked and 3 landed, a great day of steelhead just about anywhere.

In addition to the three adult steelhead, we also caught and released over a half dozen steelhead smolts while side drifting roe and pulling plugs. All of the action was over before 10 am.

“This has been a pretty good steelhead run this year,” said Jackson. “And there’s another run of fish that generally comes upriver in March.”

The hatchery counts this season back up Jackson’s assessment. The Warm Springs Fish Hatchery has trapped a total of 3038 steelhead to date, compared to 2180 steelhead for the entire season through April 30 in 2015. 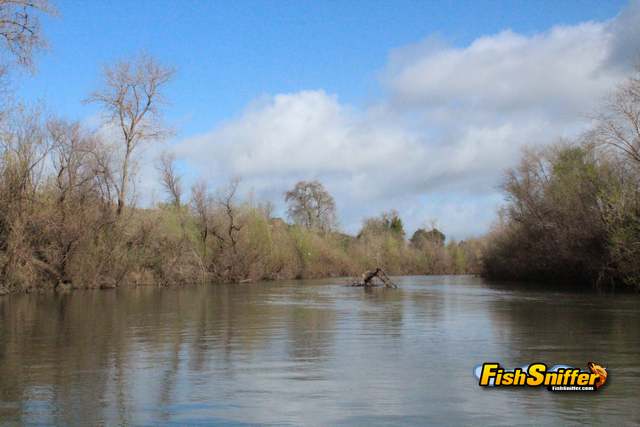 The Coyote Dam Fish Facility below Lake Mendocino has received over 457 steelhead to date, compared with 1008 steelhead by April 30 last season.

Fishing for both Chinook and coho salmon is now prohibited on the Russian. The Chinooks that are captured by the hatchery and fish facility are returned to the main stem of the river to spawn after genetic samples are taken, according to Toni Allen at the hatchery. The Warm Springs returned 55 chinooks this season and 22 Chinook last season.

The coho that return to the facilities are given to the Army Corps of Engineers Coho Restoration Program that also operates out of Warm Springs. After scale samples are taken, the progeny of coho spawned are divided up between those put into the tributaries and those used for  brood stock. Warm Springs trapped 19 coho this year and 4 the previous year.

Jackson is on the board of the Russian River Wild Steelhead Society, a group that is active in river restoration efforts. “We’re focusing on adding woody debris for juvenile fish in the main steam and we are doing restoration at the mouths of the tributarires to make sure they are free of obstructions,” he stated.

Fishing Seasons: Until 2015, fishing on the Russian River was allowed year round, subject to seasonal gear restrictions. Now the Russian River, along with other Mendocino, Sonoma, and Marin County coastal streams, is subject to a low flow closure from October 1 through April 30.

The minimum flow on the Russian River main stem below the confluence of the East Branch Russian River (Mendocino and Sonoma counties), Laguna de Santa Rosa, and Santa Rosa Creek is 300 cfs at the at the gauging station located on the main stem Russian River near Guerneville. The department will make information available to the public by a telephone recorded message updated, as necessary, no later than 1:00 p.m. each Monday, Wednesday, and Friday as to whether any stream will be open or closed to fishing.

Fishing Information and Guided Fishing Trips: Kings Sport & Tackle, 16258 Main St, Guerneville, CA 95446, offers a full selection of fishing gear,  rods and reels, kayak rentals and other items, along with a fascinating historical archive of photos, rod and reels, tackle and books about fishing and boating on the legendary river. For information about the latest fishing conditions and guide services available, call (707) 869-2156 or go to http://kingsrussianriver.wix.com/kingsrussianriver

In partnership with the California Department of Fish and Game and the National Marine Fisheries Service, they have completed the first phase of the Russian River Large Woody Debris Program, we placed root wads up to 12-foot in diameter in the main stem Russian River between Healdsburg and Wohler Bridge.

They are on their fourth year with a classroom program, Steelhead in the Classroom, where they are educating future generations about the value of good habitat and habitat restoration. Their  projects are funded through local events and grants. For more information, contact: http://www.rrwss.org/ 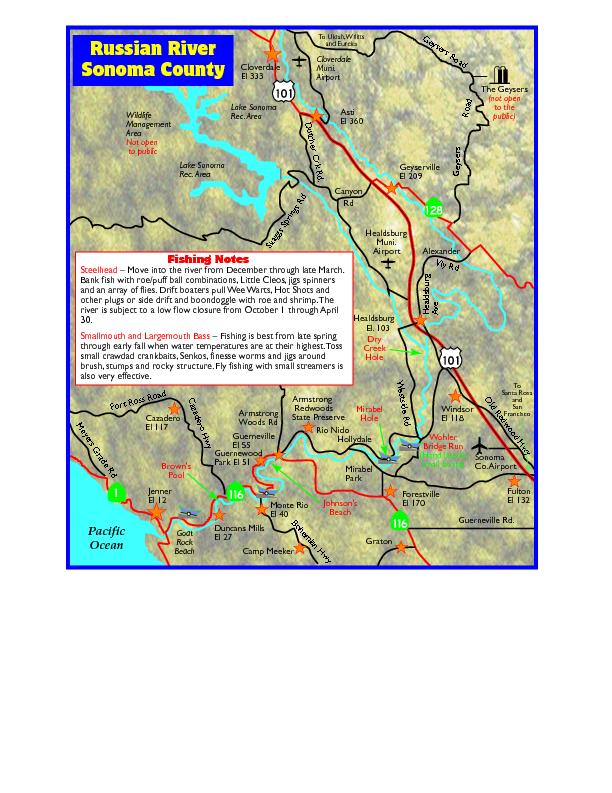