“Okay, cast up into that area of broken water,” instructed Kirk Portocarrero, and I fired my bead and slinky rig up stream.

The water was about 10 feet deep so it took a second or two for the rig to reach the bottom. Once it did I could clearly feel the slinking working over rocks and gravel and then I felt something else, two firm tugs followed by steady pressure. Instinct took over, the spinning rod’s tip shot skyward and the rod bent as I worked the reel quickly to keep any slack from forming.

At first the unseen trout did some head shaking before taking off on a long sustained upstream run. This was no pansize rainbow, this was a substantial fish! 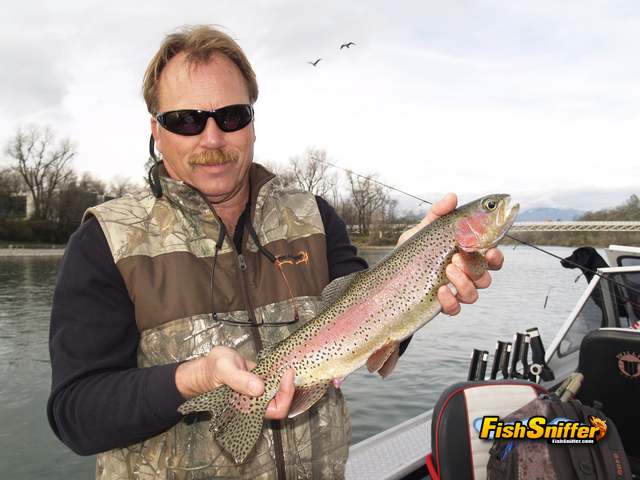 Kirk grabbed my video camera and started shooting as minutes slipped by. The fish’s strategy was to stay deep in the fastest moving water it could find. My strategy was to keep the rod loaded and hope that the barbless hook stayed in place.

The river’s cold, oxygen rich water is like a steroid for the Sac’s wild rainbows, giving them incredible power and stamina. For quite a while the big rainbow didn’t seem to weaken at all, but ever so slowly I sensed that the tide was turning my way.  The movements of the fish were less crisp and I was able to break it free of the bottom.

When the trout first appeared beside the big Willie jet boat, I couldn’t believe how beautiful it was. The rainbow was a full 23 inches long, was at least 6 inches wide along the flanks and likely weighed just over or under 4 pounds. It had an incredible iridescent red strip that started on the gill plates and extended down the length of the body nearly to the tail.

Over the course of my 40 plus year fishing career, I’ve caught more rainbow trout than any other species of fish. I don’t know how many I’ve caught in total, but I know that it is far in excess of 10,000 rainbows, because I caught that many on fly gear during the 1990’s when I used to keep track of such things… 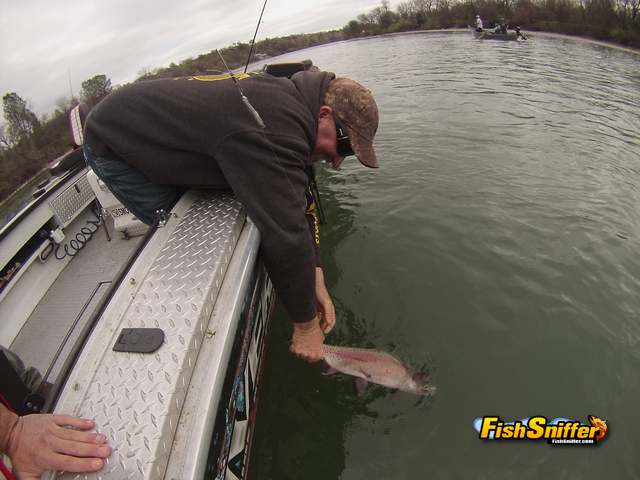 I only mention this because of all the rainbows I’ve brought to hand, the first rainbow I caught during my March 2 adventure with Kirk on the Sacramento was without question the best rainbow I’ve ever caught, both in terms of it’s awe inspiring beauty and the tenacity and resolve it displayed during the extended fight.

It was an honor to land and release such a magnificent fish. It was truly a perfect rainbow and thanks to Kirk, I’ve got all of it on video!

After landing and releasing the first rainbow, Kirk and I continued to work the run for a while longer, ultimately landing a couple more handsome ‘bows.

When Kirk got a ring on his cell phone we knew that bothers Marty and Mark Schuler had arrived and we swung over to the launch ramp and picked them up.

Once Marty and Mark were aboard and introductions were out of the way, Kirk motored us out to mid-river once again and we made a series of drifts both above and below Redding’s iconic Sundial Bridge. The fishing we experienced was absolutely fantastic. The rainbows were feeding on roe and they gobbled our plastic beads with abandon. 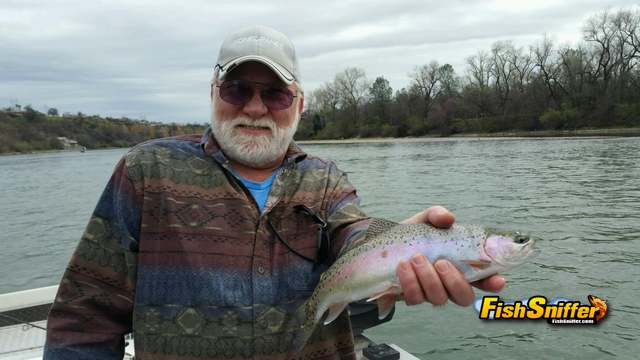 Mark, Kirk and I caught several fish, but Marty was really on fire. No matter where he was positioned on the boat or what rod he was using, he got bite after bite after bite and landed a parade of incredible rainbows that ranged from 2 to 4 pounds!

“We could run downriver a distance and do some exploring, but I don’t really see any reason to leave this bite. I’m sure we aren’t going to find anything better,” Kirk related and Marty, Mark and I heartily agreed.

When we pulled off the water at around 1 o’clock in the afternoon, the trout were still on a strong bite.

How many did we land? I’d say somewhere between 20 and 25 fish. While we did get a few 12 to 15 inch “dinks”, we landed a lot of fish that went 2 to 3 pounds and a handful that challenged the 4 pound mark. It was truly an epic day of trout fishing!

About The Sacramento’s Wild Rainbows

With salmon numbers in decline the CDFW moved to action in the early 90’s. Firm in the belief that salmon production would be better if the water in the Sacramento below Shasta Dam was colder and more consistent in temperature, a temperature control device was installed at Shasta Dam. The device draws cool water out of the depths of Shasta where the temperature is consistent. The result is that the river below the dam maintains an average temperature of 56 degrees all year long.

Prior to the installation of the temperature control device, the trout fishing on the upper reaches of the Lower Sacramento wasn’t nearly as good as it is these days and the river’s insect hatches were dismal. While the lowering of the river’s temperature was intended to improve salmon numbers it also proved to be a boon for both the Sacramento’s trout and the aquatic insects they feed upon. Current estimates assert that the riverbed now sustains a population of 2,500 insects per square foot.

With the availability of all these insects combined with the roe from salmon, suckers and other fish, it is little wonder that the Sacramento’s trout are so fat and healthy. The year around temperature consistency of the river is the so-called “icing on the cake” when it comes to the size of the fish.

It is estimated that the Sacramento’s wild rainbows grown 30 to 40 percent larger due to the river’s consistent temperature than they would otherwise simply because they have the luxury of feeding heavily throughout the winter months instead of spending the winter in a sluggish semi dormant state.