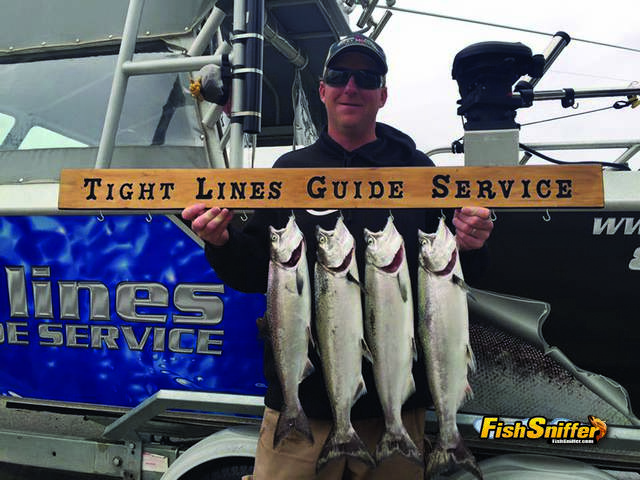 (Ione) Lake Amador is being stocked every week with Mount Lassen rainbow trout and has been planted with over 18,900 pounds of trout since October 22, according to Laurie Lockhart of the Lake Amador Resort.

The lake is officially 7″ over full and spilling like crazy. “We haven’t seen it like this in a few years and it looks like more rain is coming,” said Laurie Lockhart at the Lake Amador Resort. The launch ramp is all pavement and WIDE open for launching with the whole cove full of water, and has both docks in the water.

“Anglers did quite well on trout before the storm,” said Lockhart. “Anglers used PowerBait nightcrawlers, Kastmasters and flies in the top five feet of water. Trout guys should fish like a bass angler, tight to shore. I’ve seen many limits of trout averaging 1-3/4 to 2-3/4 pounds lately.”

“The bass are in pre-spawn mode and are full of eggs,” said Lockhart. “Boaters are catching and releasing good numbers of largemouths that are filled with lots of crawdads. I’ve heard the best reports on black 12-inch worms at night and 4 inch pumpkin colored worms during the day.  Your best bet is to fish Cat Cove and Mountain Springs, since they are the warmest areas of the lake and have the most spawning beds”

“The spawn will be phenomenal, since the lake is stable and not fluctuating. The bass will be content and not emotional,” she quipped.

Notable catches include a 2.3 lb. crappie by an anglers fishing off the dock on March 4.

(Ione) The Pardee Lake Recreation Area reopens to fishing and camping on Friday, March 11 at 5 am after having gone through several refurbishment projects. This has been the longest closure in recent memory, so these fish haven’t been touched since July of last year.

Guests will notice improvements to the marina, main office, and other park facilities. However, the seasonal RV park remains closed due to construction. Once it is reopened, guests can expect 56 expanded RV sites featuring hook-ups with modernized electrical, sewer and water connections. 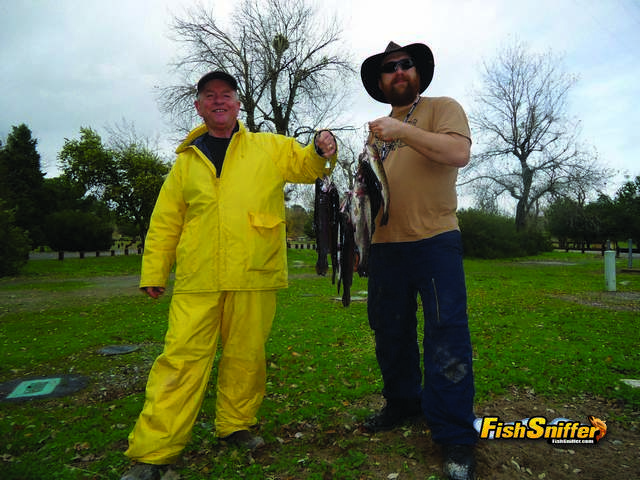 (Burson) Lake Camanche has risen from 23 to 26% of capacity over the past week as cold water is released from Lake Pardee. The reservoir is rising 4 to 5 inches per day, reported Beau Coutroul of the Camanche Recreation Company.

The colder water has boosted the trout fishing, although it has pushed the bass from the shallows into deeper water.

“I fished both trout and bass yesterday,” said Coutroul. “I hooked three trout in the morning while shore fishing in the South Pond and two others off the South Shore Ramp. The fish ranged from 1-1/2 to 3 pounds and all hit black and yellow jigs and pink eggs.”

“I caught five bass up to 3 pounds while using jigs in 20 to 23 feet of water off the island tops from a boat. The fish were a mixture of largemouth and spotted bass,” he explained.

Trout fishing continues to be “pretty good” with the weekly rainbow plants, said Coutroul. To date, 32,7900 lbs. of Mt. Lassen trout have been planted at Camanche. The fish are split up between the pond, the south shore ramp and the north shore ramp.

Besides jigs, shore fishermen are using PowerBait, nightcrawlers and Kastmasters to entice the rainbows. Trollers are employing Rapalas, grubs, Speedy Shiners and crawler/dodger combinations near the dam.

Anglers targeting trout and bass have also picked up some hefty crappie lately. For example, Kris Huff of Richmond, a Phenix Rods pro staffer, caught over 50 slabsides on a recent trip while fishing with plastics for black bass.

(Angels Camp) If you just want to hook fish, bass fishing remains the number one angling prospect at New Melones Reservoir. The spring like weather is bringing the bass closer to the banks, and a few large bass have been taken on swimbaits or big plastics or jigs in shad or crawdad patterns.

“Some fish are still out in deep water and can be caught using winter tactics,” disclosed John Liechty of Glory Hole Sports. “The best way to find some good fish is to keep an open mind and fish a handful of areas in both deep and shallow water.”

“The water temperature is still cool and slower moving baits are working best. Try using a few different soft plastic presentations until you determine what the fish want. A Texas Rig or shakey head will work when fishing around cover and switching to a dart head or drop shot rig is best when fishing in areas void of wood. Use natural crawdad colors such as green pumpkin, watermelon, brown and purple,” he said.

“The majority of fish will feed on shad and crawdads, and shad pattern worms and small swimbaits will entice bites from fish that are targeting shad while jigs and bulky soft plastic will attract the crawdad eaters,” reported Liecthy.

The CDFW continues to plant rainbow trout in New Melones. The action is starting to pick up slightly in the main lake, but the main river channel remains the top location.

Shore anglers are experiencing the best success near the Highway 49 Bridge with nightcrawler/marshmallow combinations or trout dough bait on a 3 to 4-foot leader.

”The trout fishing has been slow, but the last few trips we have been landing a few trout while trolling” said Liechty, who runs Xperience Guide Service. “We have been catching most of our trout up river. Make sure you stay in the main river channel or the trees will grab the nice lure you just bought.”

Speedy Shiners and Needlefish in shad or chrome and blue or black trolled at depths from 8 to 11 feet have worked best,

The warming weather has improved the bites for catfish and crappie. Liechty said the best time to target whiskerfish in the warmer afternoons along south facing banks with large chunks of frozen bait.

The launch ramp at Glory Hole Point is a two-lane dirt and gravel road with no courtesy dock, and it is best to launch with a 4WD vehicle. The lake continues to rise, coming up over 3 feet to 847.89 feet in elevation and 19% of capacity within the past week.

(Flaming Meadows) “Things are really slow at Don Pedro now,” disclosed Monte Smith of Gold Country Sportfishing. “The last time I hit the lake we just couldn’t get a trout. The fish had been holding deep. Now they seem to be scattered and the water is a little off color.”

“There are huge numbers of rainbows in the lake. Once they start biting I think we’ll be in for some really good fishing. Hopefully the king salmon will get going this spring too,” added Smith.

Bass fishing offers anglers the best chance for success at Don Pedro. While it’s unlikely you’ll encounter red hot fishing, you should be able to boat some spots and maybe a largemouth or two while working drop shot rigs and spider grubs in the 20 to 30 foot depth zone.

As of press time Fleming Meadows is the only operational ramp at Don Pedro and the water level is on the rise.

(Snelling) There is not much change on the trout front with any plants at Lake McSwain within the past week. The water is starting to clear up after releases from Lake McClure had stained the lake over the past few weeks.

Trout fishing has been best from the banks near the campgrounds with blue/chrome Kastmasters or garlic rainbow trout dough bait. The lake is down a few feet as work on the Exchequer Dam at Lake McClure continues.