Conventional wisdom tells us we need to be as quite as possible so we don’t scare off the fish.

Lately however, I’ve seen the opposite effect.  Don’t get me wrong, there are certain types of sound that will scare off any fish.  Like the drop of a fishing rod, a hard stomp on the boat deck or Britney Spears played on blast.

True story, the British Navy uses Britney Spear’s music to scare off Somali Pirates.  My point is, there are certain types of sounds that will attract fish and some that will not.

So, I’m fishing in the early fall for stripers from my boat.  I’m fishing the deeper water channel and scanning for the schools.  As I’m heading west along the rock wall, my fish finder lights up.  I was right over a big school of fish.

I threw out a jerkbait and I started jerking the lure back.  Now my rod is 7’6”, I’m about 5’10”and on occasion, the tip of my rod will slap the water when fished too low.  Just by chance, as the fish finder lit up with fish, the tip of my rod slaps the surface of the water, katoosh.  Instantly, from the corner of my eye, I see a blob slowly rise towards the surface on the fish finder.

A couple seconds later they lose interest and go back down to their original depth.  Katoosh!  I splashed again and again.  This time they came within 6 feet of my transducer.  They were reacting to my splashing! 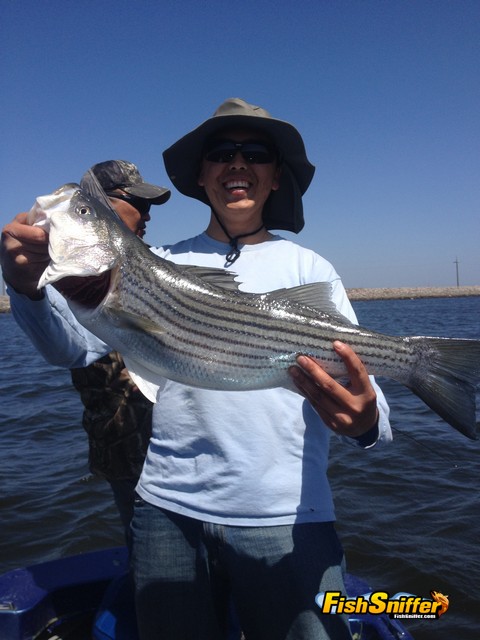 The fish weren’t jumping into the boat that afternoon from my splashing but I did catch a few stripers hungry enough to take my lure.  I thought I had become the fish whisperer that afternoon, calling fish from all around to my splashing.  In actuality, using sound as an attractant has been common knowledge amongst experienced fishermen and lure makers for quite some time now.

George Perrin designed one of the first rebel minnow lures with ball bearings to create a rattling sound back in the 60’s.  Greg Myers holds the world record striper caught on rod n reel.  He used a rattling technique that mimicked lobsters crawling on the bottom.  It attracted stripers from all around to his line.

We all know fish turn off at certain times during the day.  Fish are curious and opportunistic feeders.  Sometimes, all it takes is a splash to let them know food is nearby.  Like the ringing of the dinner bell.

So next time you think there’s nothing around, give the water a little splash.  You’ll be surprised at what you can attract.