With a parade of violent Pacific storms battering California you would have had to have been a moron to think that the weather beyond the Golden Gate was going to be pleasant.

The fact of the matter was that when Captain Chris Smith of Captain Hook Sportfishing steered the 34’ Defiant out of the Berkeley Marina on Saturday, March 12 we didn’t know if the conditions would allow us to go out beyond the bridge. The previous day, much larger charter boats had attempted to go out, but upon reaching the Golden Gate, they had been forced to turn back. 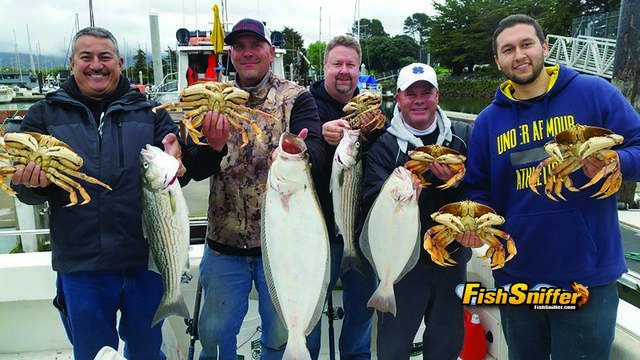 You are likely wondering what had prompted five Fish Sniffer supporters along with myself, two deckhands and Captain Chris to roll out of bed in the predawn darkness, don all manner of foul weather gear and head out into the teeth of a winter storm aboard a relatively small boat? Crab!

After a long delay in the opening of the Dungeness crab season we all wanted crabs. Our plan was to head out, hopefully hitting a window calm enough for finding and pulling crab gear and then we’d head back into the bay and spend the rest of the day trolling for halibut and stripers.

We got the first taste of what we’d be up against when we ran into a substantial ground swell while we were still inside the bay where swells are seldom encountered unless the weather outside is pretty bad.

Cruising beneath the Golden Gate Bridge the water was rough but nothing we couldn’t handle. The test would be whether or not we could make it around Point Bonita. The conditions off the point can be rough even on a calm day and it was far from calm.

“Okay guys we are going to sit here and assess the conditions for a few minutes before we decide,” Captain Chris related as we bobbed like a cork in the cove immediately to the east of Point Bonita.

Looking out to sea, swells that seemed as big as hills dominated the scene and huge pillars of white water in the distance indicated that the swells were actually breaking across the north bar. I’ve been fishing out of the Golden Gate for over 30 years and those swells breaking miles off the beach were a new sight to me!

“The swells are big, but they aren’t breaking out in front of us. Based on the tide and what I’m hearing on the radio, I think we’ve got just enough time to make it out, run our gear and get back inside before things really deteriorate,” Chris asserted.

A quick vote and it was agreed that we’d venture into the washing machine in hopes of scoring our crab dinners. There are only a handful of operators that I trust to have the skill, judgment and experience to operate in the kind of rough dangerous conditions that faced us and Chris Smith is near the top of that short list.

“Fire up the Bon Jovi, we are going Deadliest Catch mode,” exclaimed Joey Smith, Chris’s son and junior deckhand for the day.

When Chris pushed the throttle forward and inched the nose of the Defiant around the corner we got to see his skills and calm persona on full display. With Chris at the wheel our passage through potentially deadly seas surrounding the point was downright uneventful.

With Point Bonita in the rear view we were still surrounded by mountainous swells, but they were more organized and predictable. Our next challenge was locating the crab gear, since in the big water the buoys that marked the locations of the traps spent a lot of their time beneath the surface only popping up in the troughs between the swells.

Slowly but surely we spotted the markers, the deckhands worked the lines and one by one big aggressive Dungeness crabs went into the live bait tank.

About 90 minutes later we had full limits of 10 crabs per angler stowed away in the tank and it was time to head in. Going out the tide was running against the wind, but coming in the wind and tide meshed. It was far from calm, but the ride was better with the weather and current at our back.

The final hurdle was navigating back around Pt. Bonita. We couldn’t go too far outside because there were still huge breakers crashing on the North Bar. Of course we couldn’t get too close to the point either as there were lots of massive confused swells that could easily crush the Defiant against the rocks.

Chris maneuvered left and right, waiting his chance. When Chris saw the swell he was looking he throttled up the big twin diesel engines and put the boat right on top the swell.

We basically surfed around the point atop the swell. Elevated like we were it was quite a sight. It was like standing atop a building watching all hell break loose around us with big dark swells surrounding the starboard flank and deadly white water and rocks off the port side.

With Pt. Bonita behind us for a second time, the ride back into the bay was uneventful. Back inside we spent some time trolling rigged bait and got one hit that was likely from a halibut. We tried to BBQ some lunch with limited success due to the wind. Soon after that we decided to call it a day early and head back in. It looked like the chance of hooking a halibut was pretty slim with the rough muddy conditions inside the bay and we had a bunch of crabs to cook and clean. What an adventure it was!

Captain Chris will be spending the rest of the spring and summer chasing halibut, bass, sharks, salmon, lingcod and more both inside and outside the bay. If you’d like to book a trip on his super comfortable Defiant give him a call at (510) 322-0493.