Have you heard about the new Shim-Abu-Dia-Lew baitcasters? They’ve got 200 ball bearings and generate 5,000 pounds of drag pressure! Yep fishing reels are hot, but we won’t be talking about them in this article. We also won’t be discussing cool stuff like $400 swimbaits, the latest designer egg cure or full colors sonar units that stream ESPN and mow your lawn while you’re at work…

Nope this week we aren’t going to discuss anything sexy or exciting. Instead we are going to look at terminal tackle and basic skills that lack excitement, but have the ability to make your time on the water more successful and enjoyable. Let’s get started!

I’ll cut right to the meat and speak my mind. Line twist is a real bummer that invariably bites you in the butt at the least opportune time! As a general rule, line twist is more of an issue with spinning gear then it is with traditional baitcasting style gear, but rest assured the line on your baitcaster can become horribly twisted too.

With spinning gear line twist occurs if you snap the reel’s bail shut by rotating the reel handle rather than closing it manually with your fingers. It also occurs anytime you are reeling and line either isn’t coming onto the reel or is paying out of the reel against the drag. This can occur when you are fighting a big fish or when you’ve snagged the bottom. Rest assured, anytime a spinning reel is rotating and line isn’t being retrieved, twist is being introduced into the line.

With baitcasting gear, it’s harder to get twist. You can reel all day long against running fish and no twisting will occur. However a rotating trolling bait or a even rotating fish being cranked out of the depths can add enough twist to a baitcaster’s line to cause major problems.

Before we get into preventing twist, let’s assume that the ship has sailed and you’ve got a rig in your hand with woefully twisted line. Do you have to strip off that expensive line and start over again?

Absolutely not! Line doesn’t want to be twisted.  All you’ve got to do is allow it to straighten out. If you are in a boat motor forward slowly, remove everything from your line and then spool all the line off the reel and allow it to trail behind the boat for a few minutes. When you reel the line back up the twist will be gone. 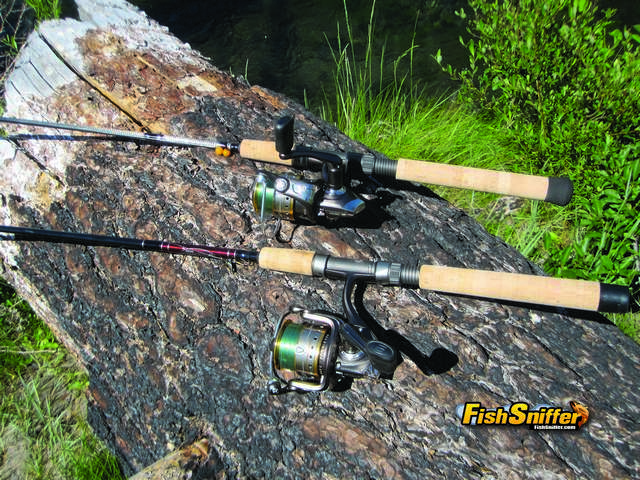 If you are fishing a stream, you can do the same thing by spooling your line out slowly in the current. Once you’ve got all the twisted line into the current let it hang there for a few minutes and then slowly retrieve the now twist free line. While steelhead or trout fishing from the bank with spinning gear, I’ll often straighten the line as described several times per day.

Now that we know how to fix twist once it has occurred, let’s talk a bit about preventing twist in the first place. Yes guessed it, this is where swivels come into play.

Now a swivel isn’t going to help with the line twist you get from the function of a spinning reel’s drag or bail, but it will help anytime you are dealing with a rotating bait. This could be while casting an inline spinner or trolling a rotating bait such as a rigged shad or a Brad’s Mini Cut Plug hard bait.

For casting applications, such as when plugging with spinners I’ll often add a single black swivel to the line about 12 inches above the lure and that’s all that’s needed to eliminate twist.

When trolling with a rotating bait, like a rigged baitfish or a Sep’s Grub, a standard style swivel generally won’t get the job done.  Instead you’ll want to run with a bead chain style trolling swivel like those offered by Sep’s and other companies. These swivels allow maximum rotation and generally putting one or two of these between your main line and leader is all you need for twist free fishing. 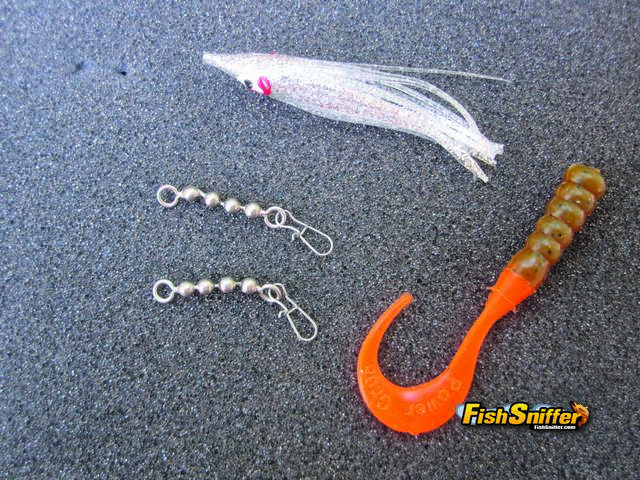 Now lets say you run out of trolling swivels, but you still want to keep trolling rotating baits, what can be done to tone down the twist? What you’ll want to do is take a short section of heavy mono and tip it at either end with standard bargain basement swivels. This swivel-adorned section of line is then placed between the main line and the leader.

In real world terms the set up might look like this. Let’s say that I’m rolling shad for trout. I’m using a 10 pound test main line and an 8 pound fluorocarbon leader. I would create a 12 inch section of 30 to 40 pound line with swivels at either end and place that between the leader and main line. For whatever reason the heavy mono coupled with the swivels, even if they are the el cheapo variety, will resist rotation leaving your main line basically twist free.

When fishing in the ocean I’ve gotten into drifting big natural baits like live rockfish or brined sardines and artificials like huge 8 to 12 inch soft plastic grubs for lingcod on three way rigs with heavy sinkers.

Early on I discovered that the sinker attached to the three-way rig prevents twist from being introduced to the main line, but the three-way swivel itself isn’t enough to prevent the actual leader from twisting. Often upon reeling up I’d find that my leader that was once 36 to 40 inches long was transformed in to a twisted clump that would need to be cut away and replaced. 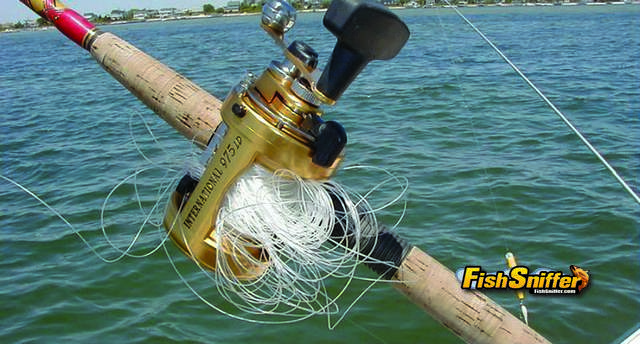 What to do? Well with a little experimentation I found that adding a standard swivel right at the middle point of the leader leading to the bait was enough to completely eliminate leader twisting regardless of how big the bait is or how fast the boat is drifting.

The addition of the mid-leader swivel has proven to be a great labor saving discovery, because some of the leaders I used for lingcod take at least 5 minutes to tie. You don’t want complicated rigs like these being quickly destroyed by line twist.

What To Do With Your Old Or Twisted Line

Whether or not line twist is a problem for you, if you fish with mono, you should be changing that line regularly. But what do you do with the old line?

Clearly you don’t want to leave it on the bank or in the water where it will harm fish and wildlife and create an eye sore.

A better option is to toss the line in a garbage can, but even then the line is likely to end up in a landfill someplace. It may not be harming the environment, but it isn’t helping anyone or anything either.

The folks at Berkley are leaders in the manufacture of fishing line and they are also leaders in the arena of line recycling. They’ve been collecting and recycling line for decades and the engineers in Spirit Lake have come up with some super innovative ways to utilize the old line. They’ve used to make everything from park benches to modular fish habitat.

Working with marinas and retailers Berkley has over 17,000 line collection bins spread across the U.S. If you don’t know where one of these stations is located, don’t worry, you can now send your line directly to Berkley. Just stuff it into an envelope and mail it off to: Berkley Recycling, 1900 18th Street, Spirit Lake, Iowa 51360.

Not only will your line not end up in a landfill it will actually be transformed into something useful!