Over 250 anglers participated in the NorCal Trout Angler Challenge Tour event at Lake Amador, hosted by Angler’s Press and the Fish Sniffer magazine, on Saturday, March 18.

The lake was in prime shape for trout fishing, with the lake full and going over the spillway and the Mother Lode foothills surrounding the lake displaying verdant green colors resulting from the winter rains.  Anglers caught big rainbows from both boat and shore while enjoying the warm and sunny weather.

Lon Garland won first place in the adult division by bagging a 5.95 lb. rainbow. He was fishing in his boat with Ryan Baird and Matt Tomchick, all from Loomis. 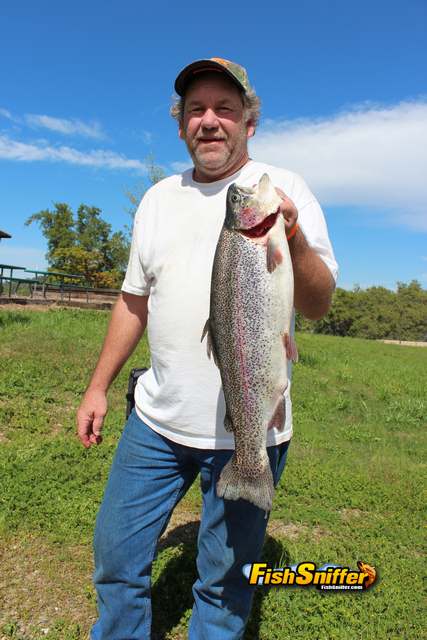 “We only landed 3 fish while trolling Rapalas at 25 feet deep,” said Garland. “It was the first time that I’ve ever fished Lake Amador. In addition to the three fish we boated, we also lost another trout.

“We thought we were going to get skunked until we hooked our first fish, the big one, after several hours of fishing,” he noted.

Adam Papini, a shore angler, won second place with a 5.84 lb. fish that he hooked around 1:30 pm. “I jhooked the fish while fishing off the spillway a few minutes ago,” he excitedly told me as he brought the still-wriggling trout to the certified scale for Vince Harris of Angler’s Press to weigh.

The participants weighed 94 fish in the adult division, with the smallest fish weighing .81 pounds. To quality for the top 50 adult winners, you had to catch a 1.72 lb. rainbow.

Sixteen anglers weighed in fish in the youth division, topped by the 5.41 lb. rainbow that earned Cody Moore of Elk Grove first place. “I hooked the fish while trolling a tiger striped Rapala,” said Moore.

Yakima is giving away $100 at each tournament to the biggest fish caught on a Rooster Tail. Walter Gibbs of Stockton won $100 at Amador when he nailed a 3 lb. rainbow on a Roostertail.

For more information on future NTAC events at Amador and other lakes, visit: www.anglerspress.com or call 916-768-0938.

The lake management stocked the lake with large numbers of trout prior to the tournament. “Right before the derby on Friday, we planted 3600 pounds of rainbows,” said Elise Lockhart of the Lake Amador Resort. “Twenty percent of those were trophy fish ranging up to 12 pounds. We also planted 2400 pounds of rainbows on March 11.

Since October, the resort has planted a total of 24,900 pounds from Mt. Lassen Fish Farm and is stocking the reservoir with trout every week through May when the water becomes too warm to plant. While Mt. Lassen rainbows are being stocked in the lake now, the legendary Lake Amador Trout Farm will be opening back up soon.

“By far, more quality fish were caught in this event than in any other event previously held,” noted Vince Harris, tournament director, and president of Angler’s Press Outdoors. “It is without a doubt that the Lake Amador stocking program is one of the best in Northern California.”

In fact, you never know what you might hook at Lake Amador. Just ask Bill Chiarello from Sacramento, who was letting his dog out to run around in the back of the lake somewhere in Jackson Creek on March 17. He decided to toss out some Power Eggs for a bit and no sooner did he set his rod down, line started ripping off his reel.

The state record is 52 lbs, so he just missed it, but this nonetheless was definite the lunker of a lifetime. He released the leviathan back to the lake, so it’s still swimming around out there.

The lake is currently 102% of capacity and going over the spillway and the surface water temperature is 58 degrees.

The launch ramp is all pavement and wide open for launching with the whole cove full of water, and has both docks in the water.

For more information about Lake Amador, contact the Lake Amador Resort, 209-274-4739, or go to: LakeAmador.com.