Allen Vue of Sacramento experienced a great day of fishing at Rancho Seco Lake when he hooked two rainbow trout weighing 6.56 and 6.32 pounds while tossing out a Kastmaster from shore on Sunday, April 3. 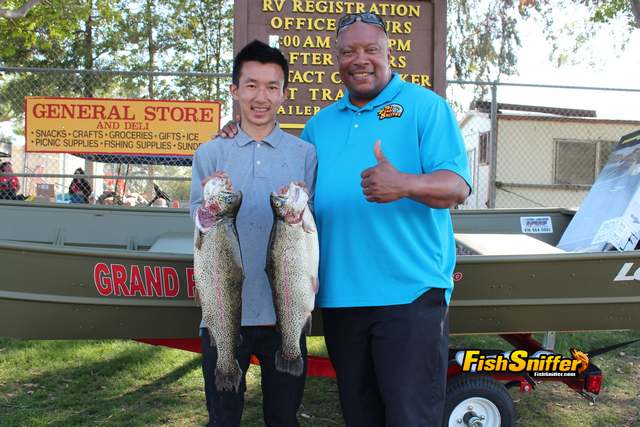 He brought the first fish, the 6.32 lb. rainbow, to the scales at the SMUD office around 3 pm, putting him in first place in the April 2 -3 derby. Then he caught and brought his second big fish, the 6.56 pounder, to the weigh in about 15 minutes before the 5 pm shut off time.

Both of these fish would have allowed him to capture first place in the annual Sacramento Municipal Utility District event.

“I found a school of big trout swimming around and concentrated on catching those fish,” he said.  He landed three other large rainbows also.

For his catch, he earned the Adult Grand Prize: a Lowe 14’ aluminum boat, trailer and electric motor package for the heaviest fish caught.

The second and third place winners in the adult division were Chris Donaldson of Cameron Park, with a 6.22 lb. fish, and Alyssa Delora, with her 5.34 lb. rainbow.

Nine-year old Roree MacGregor of Elk Grove won first place in the Kids (10 and younger) Division with a 5.42 lb. rainbow. She also won the Youth and Kids Grand Prize, a fishing kayak. 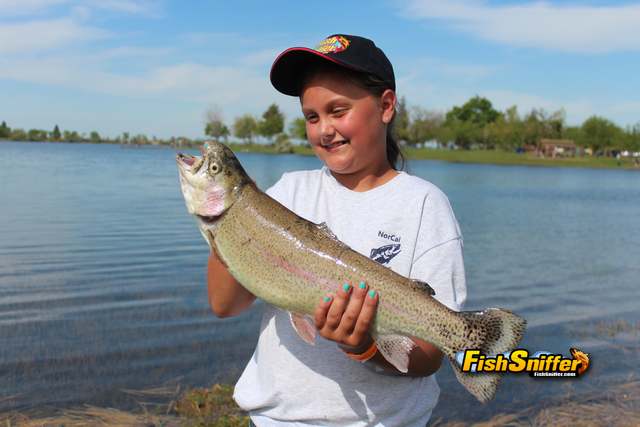 Plearnik caught her fish while throwing out worms with her cousin, Cory Moore, and her mom, Tamarah, of Sacramento. 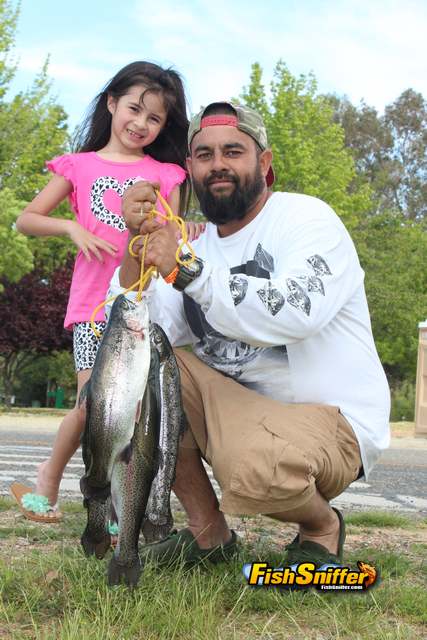 Nancy Bui-Thompson, the President of the SMUD Board of Directors, who was at the event on Sunday, commented, “This is a great event for kids and their parents on a beautiful day to catch fish and enjoy the facilities of the Rancho Seco Recreational Area. They also have the opportunity to win some prizes. SMUD is happy to support the community by putting on the derby.”

The annual derby, first held in 1994, is the brainchild of Jose Gutierrez, the weighmaster even now after his retirement from SMUD, and Dave Brock, the head of the park at the time.

“SMUD had taken over the park and we wanted to bring more people into the facilities, so we sponsored the event as a way to get more people to enjoy Rancho Seco,” Gutierrez said.

I have attended and covered all of the derbies for the Fish Sniffer, with the exception of two, since the event began. I have seen monster rainbows, huge Florida-strain largemouth bass, redear sunfish, bluegill and crappie landed by anglers over the years.

I am extremely happy that the event has continued to be sponsored by SMUD all of these years – and I’m also pleased that the Fish Sniffer has signed on as a sponsor of the event over the past two years!

The value of the event was demonstrated by the enthusiasm that Christina Gritts, her two sons, Christopher and Westly Gritts, and neighbor Jason Bersamin showed for the event.

“Westly placed fifth in the age group 11 to 17 with his 17 inch trout weighing 2.44 pounds,” said Christina Gritts. “He hooked his big trout while soaking PowerBait. We’re hardcore anglers – we were here both days fishing from early in the morning,”

In addition, the three young anglers also landed 15 bluegill and 3 crappie while fishing from their kayaks.

Rancho Seco offers great facilities for family fun and recreation. You can toss out your line from the shore or one of six fishing piers. Or you can fish from your small boat [electric motor only] or rent a fishing boat at the lake — or a kayak, rowboat, or paddleboat. 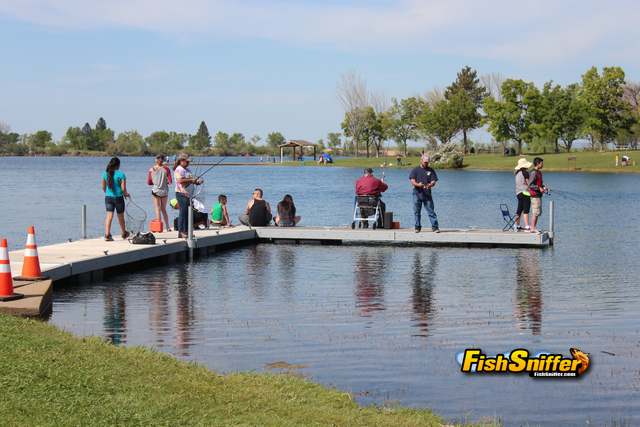 If you want to stay overnight, you’ll find eighteen RV sites with barbecues, fire pits, picnic tables, drinking water and electrical outlets, plus an additional 25 camping sites for those who like to sleep under the stars.

Hikers may enjoy the seven-mile Howard Ranch Trail, which begins at the lake and meanders across beautiful grassland habitat and blue oak woodlands dotted with vernal pools and–at this time of year–an abundance of native wildflowers.

Rancho Seco Reservoir, a 120-acre year round recreational facility located in the rolling countryside between Galt and Ione, is a favorite of anglers throughout the Sacramento, Lodi and Stockton metropolitan areas.

Rocky Mountain Recreation Company is the concessionaire at Rancho Seco. For more information about the Rancho Seco Recreational Area, call 209-748-2318 or visit http://www.rockymountainrec.com/lakes/lake-rancho-seco.htm or https://www.smud.org/en/about-smud/community/recreational-areas/rancho-seco-lake.htm