Lake Amador, situated on Jackson Creek in the now emerald green Mother Lode foothills near Ione, has acquired a reputation over the years for being one of northern California’s premier spots to battle huge trout. 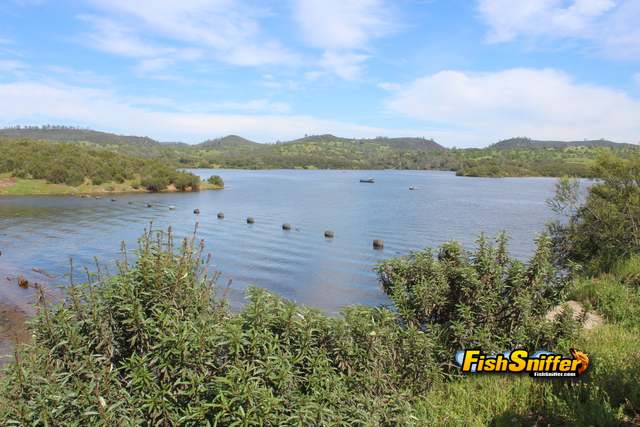 That reputation was evidenced during the NorCal Trout Trout Anglers Challenge at Lake Amador on March 18 when Vince Harris, tournament director, and president of Angler’s Press Outdoors, was elated by the big turn out of anglers and the many fish they weighed in.

“By far, more quality fish were caught in this event than in any other event previously held,” said Harris. “It is without a doubt that the Lake Amador stocking program is one of the best in Northern California.”

It was at Amador where I experienced one of the most magic trout fishing trips I ever made to any California water. It was during a late spring weather front that Doug McPherson of Sacramento and I went up to the lake to target bluegill so we could have a big fish fry. After we caught our share of the feisty sunfish, we went trout fishing. I ended up catching four beautiful “cuttbow” trout before dark. 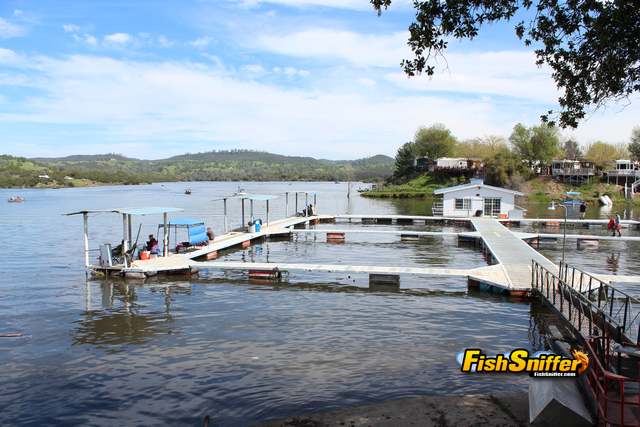 The next day I decided to go back to the reservoir solo and see if the bluegill were still biting. I fished the shoreline weeds with golden grubs, but didn’t pick up any sunfish.

So I went over to the boat dock to see if the bluegill were holding there. I didn’t hook any bluegill, but I found amazing fishing while on big, hard fighting trout in the 3-1/2 to 4 pound class while using the grubs under the dock.  I began catching one trout after another, catching and releasing a bunch and then putting five on the stringer. My stringer weighed close to 20 pounds – and all of the fish has full tails almost like those of wild steelhead.

Amador is unique among northern California lakes in that the trout stocked in the reservoir for decades were raised on site in the Lockhart family’s fish hatchery. The fish were raised in the same water as the lake – and the fish didn’t have to adapt to the reservoir water like planted trout from other hatcheries have to.

The lake featured three different strains of trout – cuttbows (cutthroat/rainbow hybrids), steelhead/rainbow hybrids and the standard catchable rainbows stocked every year by the Department of Fish and Wildlife. 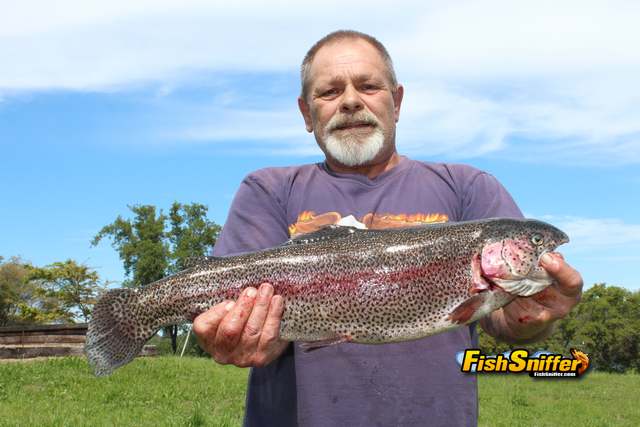 However, the lake management was forced to shut down the hatchery during the drought in 2013, due to lack of water to keep the facility going During the meantime, the Mount Lassen Fish Farm has done a great job of keeping the trout fishery going with regular plants of rainbow trout, including trophies, from October through May over the past three years.

The lake level went over the spillway, due to the heavy rain in the Jackson Creek watershed that feeds the lake this year, for the first time in years and the Lake Amador Resort plans to have the on-site hatchery in operation again by this July or August.

“The reservoir went over the spillway on the day of what would have been by mother Jane’s ninety-second birthday, March 7, “said Laurie Lockhart at the resort. “If you think a lion roars, you should have heard the water going over the spillway.”

“We expect to see the reservoir no more than 2 to 5 feet down for the July 4th weekend,” she said.

Lee Lockhart said reopening the hatchery will require them to do a number of repairs on the concrete ponds and tanks over the next few months. They hope to have the hatchery up and running tentatively by July or August,

The hatchery features four 50,000 gallon round tanks and three 1 million gallon rearing ponds. He noted that the costs of operating a hatchery and feeding fish have gone up dramatically in recent years – and that they plan to raises around 20,000 fish per year, along with continuing to buy 20,000 or more from Mount Lassen. 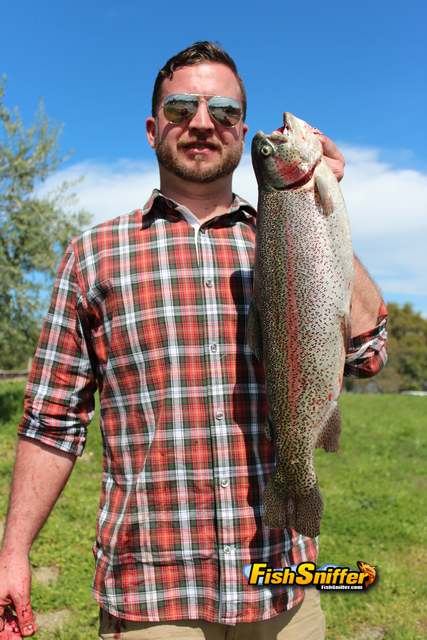 “The state of California has made it hard for the little guy to get the operating costs down,” he said. Plus, the cost of raising trout has gone up from $.50 per pound when they opened the hatchery to $2.50 per pound in 2013 when the lake management had to get the trout from elsewhere during the drought.

The hard fight that Amador trout offer anglers, along with their beautiful appearance similar to a wild steelhead or stream trout, is due to a combination of factors, including the unique strains of fish grown here and the conditions they are raised in.

First, the hatchery raised the fish in tanks 5 to 6 feet deep, rather than 18 inches deep like other hatcheries. When fish are raised in deeper water, the fish both fight better and develop full fins, unlike the rounded fins characteristic of most hatchery trout.

Second, when the fish reach the age of 8 months and are taken out of the raceways, they were raised in 7 octagonal tanks with a constant current running through them. Swimming in the current forces the fish to become strong and healthy.

Third, the resort uses top quality “EWOS” food to raise their fish.  Since it featured krill and sardines, it helped give the fish’s flesh their unique pinkish orange color.

Fourth, the lake management kept the amount of fish in the hatchery at a lower density than the state and other hatcheries, so the fish kept squared, rather than rounded, tails.

Fifth, the quality of the fish they raised also has to do the unique strains of fish they raised. While they first spawned fish from brood stock, they began buying eggs because it was less expensive.

“We raised kick-ass fish that fought like hell,” he noted. “Over the last 15 years of operation, 90 percent of the fish were steelhead/rainbow cross and 10 percent were Donaldson cuttbows. We plan to buy these fish again. However, because costs to raise fish tripled, we aren’t going to be able to raise 100,000 fish per year like we used to.”

Anglers will have to be patient about seeing Amador’s homegrown fish again. “It will be 1-1/2 year years, around the spring of 2013, before we are able to release fish that are big enough to be planted in the reservoir again,” Lockhart said.

While trout offer the most popular fishery at Amador from October through May, the lake also hosts great populations of Florida-strain largemouth bass, channel and blue catfish, black crappie, redear sunfish and bluegill. Amador is managed just as a fishing lake – no water skiing or jet skis are allowed. 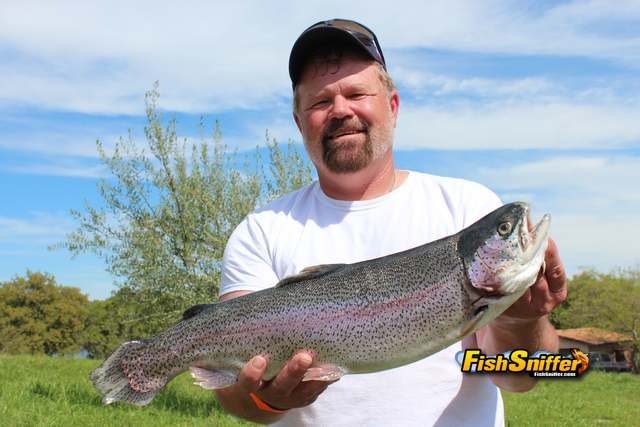 The largemouth found in Amador are Florida strain/northern hybrids. Northern strain bass were planted in the lake after it was filled in 1968, followed by the introduction of Florida-strain largemouth by the DFG in 1973.

Tim Kimura of Sacramento set the lake largemouth record in 1986, when he fooled a 17.1-pound largemouth on a Tennessee Shad crankbait. Another angler finally broke that record when he caught a 17 lb. 2 oz. bass in 2005.

The lake management also plans to plant some channel catfish this year to supplement the natural population of cats in the lake. “We will probably stock 2,000 pounds, 500 pounds every other week, this spring and summer,” Lockhart said.