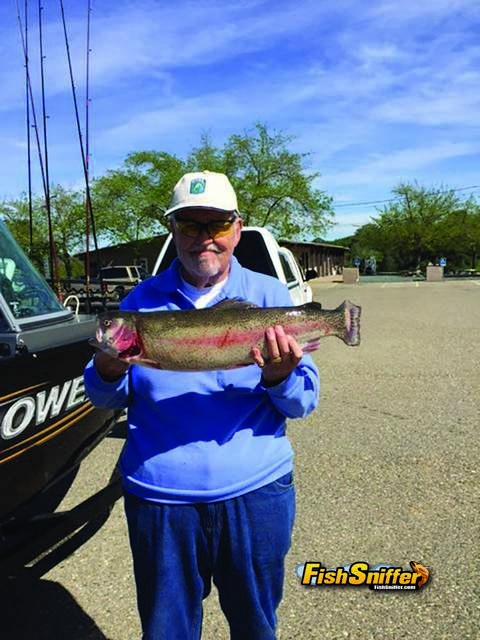 (Ione) While rainbow trout continue to provide the hottest action at Lake Amador, it was a huge catfish that topped the recent catches at the reservoir. Glen Poole landed a 19.12 channel catfish while fishing a white Mice Tail from shroe, reported Debbie Grayson at the Lake Amador Resort.

“We planted a total of 7200 pounds of rainbows in the lake in March,” said Grayson. “Trout fishing continues to be good for both shore and boat anglers. Our last plant of 1200 pounds of Mt. Lassen rainbows went in on March 31.”

The lake is 100 percent of capacity and the surface water temperature is 60 degrees.

(Ione) Lake Pardee is in great shape for fishing and boating, now that the lake is 99 percent of capacity.

“For the bank anglers, the trout are still pretty elusive,” according to the report from the Lake Pardee Recreation Area. “However, for boaters on the lake, the trout are really coming out. Look for them in the main body of the lake, up the river arm and by the log boom.”

One angler landed a 5-¾ lb German brown near Deer Island while trolling a pink hoochie. Mel Caldwell also caught a quality brown while fishing just past the narrows with a broken back Rapala

“You will find largemouth and smallmouth bass all over the lake still,” the report noted. “Some locations that were hot this week were the Woodpile and Ticket Cove. Try crayfish jigs, plastic worms or brush hogs (watermelon).”

Boaters are hooking lots of 8-13 inch kokanee while trolling near Deer Island. Try using Uncle Larry’s spinners, tipped with white corn, with a dodger or a pink hoochie.

“We’re still working on getting a regular trout supplier. Contract negotiations are still going on. We are hoping for some good news very soon,” the report concluded.

(Burson) The weather is beautiful, the water level is rising and the fishing for black bass, trout, crappie and catfish is going strong, reported Terry Willard of the Lake Camanche Recreation Company.

“The hot spots for trout trolling are out by the buoy line in front of the dam, by the floating restrooms and down the Narrows,” said Willard. “The rainbow bite at the South Trout Pond remains hot with the weekly plants.”

To date this season, a total of 39,900 pounds of rainbows, including 13,900 pounds into the pond, have been stocked in the lake.

Dave Jones of Lodi brought in 2 trout and a crappie while using a Rapala by the dam. The trout weighed 5.76 lbs. and 3.4 lbs. and the crappie weighed in at .76 lbs.

“Black bass are moving into shallow, warmer waters,” Willard said. “Look for temperatures at least 62-64 degrees and water no more than 6-15 feet deep. The south cove is starting to fill, which is ideal for the bass, with warmer water and plenty of vegetation.”

“With the depth changing daily, so do the bed locations and the water temperatures. Each day is a new challenge but the bass are ready for the anglers that can find them, “Jans tipped.

Camanche water levels continue to rise as heavy releases from Pardee flow into Camanche. Pardee Lake is 99% full and is releasing 1,338 cfs into Lake Camanche. Camanche is 38.94′ to spill level.

(Angels Camp) The big news at New Melones is that the Glory Hole launch ramp is finally on the concrete and the floating docks are in the water. The lake rose 6 feet in the past week to 877.50 in elevation and 25% of capacity.

Glory Hole remains the only launch available on the lake with another 30 feet of vertical rise necessary to open up the Tuttletown ramp.

“The bass are getting more active as we are finding 60 degree water in many locations on the lake,” reported John Liechty of Glory Hole Sports. “The fish are thinking about spawning, and some have already starting to spawn as it is bass season right now.“

“Senkos are good for both numbers and size, and I like to fish them on a Texas- rig near brush before switching to a dart head or tube when working around rocks. Ripbaits and small swimbaits are also effective with the action better on some days than on others. I prefer green and brown colors with a little red flake or chartreuse in order to bring out the bite,” he advised.

“As the lake is rising quickly, the fish are still relating to deep water, and I look for areas with deep water leading into creek channels and spawning area,” he revealed.

Crappie fishing is also going strong with slabsides to 2.33 pounds landed by Colten Lewis while targeting bass. Anglers have been picking up limits of crappie with medium minnows or mini jigs around the submerged wood along the shorelines.

Trout action has risen to a “fair” rating as trollers pick up a few holdover rainbows in the main river channel, reported Liechty. They’re employing Needlefish in Cop Car in clear water and gold patterns in stained water at depths from 20 to 30 feet.

(La Grange) Monte Smith of Gold Country Sportfishing recently visited Lake Don Pedro and reported that the level continues to rise and that there was some floating debris, but that the clarity was pretty good.

The trolling bite is slowly but surely picking up at the lake as Smith reported boated a kokanee, three rainbows and a bass.

The lake level continues to climb at Don Pedro and the reservoir is now at over 60% of capacity.

David Hurley of the Hot Sheet reports that all three of the lake’s launch ramps are now open, but boaters who use the Blue Oaks ramp are advised that the entire area from this ramp out to the 5 mph no wake buoys between Schoolhouse & Fleming Point will remain a slow 5 mph No Wake zone until such time that lake level conditions allow for the removal of houseboat mooring from this area.

Travel time from the Blue Oaks launch ramp to the 5 mph no wake buoys at no wake speed is approximately 25 minutes.

Vessel access in the Tuolumne River Arm is now navigable 4 miles upstream from the Moccasin Pt. Recreation Area. A barrier boom is closed below this floating debris to prevent it from moving downstream.

A second boom located further downstream is currently open, but is subject to closure during rainy weather. Please boat with caution in this area and throughout the lake as there is still floating woody debris in many areas.