From the West Delta all of the way up past Colusa, the spring striped bass run is in full swing on the Sacramento River. Bank anglers and boaters are both hooking plenty of fish, ranging from shakers to big females pushing 40 pounds.

As is always the case with the weather fronts of spring, the fishing has varied a lot on a daily basis. However, the overall fishing has been excellent, with anglers hooking lots of keepers in the 18 to 24 inch range, along with plenty of shakers.

“It’s been great season so far,” said Rob Reimers of Rustic Rob’s Guide Service when I fished with him on Saturday, April 16. “It’s definitely been our best season on the Sacramento and Feather since the drought.” 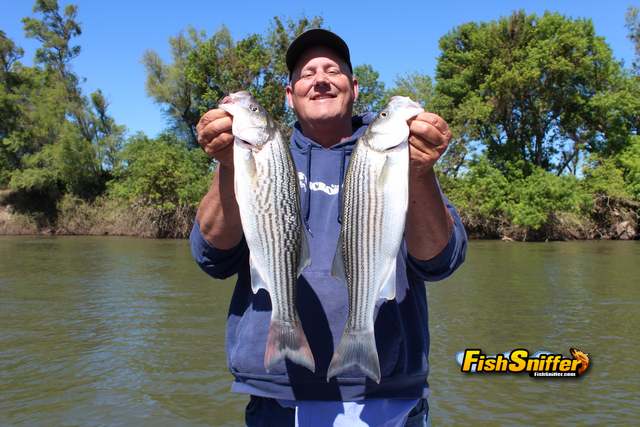 When the Sacramento River was still high and muddy, Reimers found success on the Feather River while bait fishing with pileworms. When the water started to clear up on the Feather, he started to catch more fish while drifting minnows.

Most of the fish taken on the Feather this season have been schoolie males to 7 pounds or undersize stripers, but there are some bigger fish out there. One woman recently caught a 39.5 lb. striped bass while fishing a jumbo minnow on the Feather River.

When the Department of Water Resources dropped flows on the Feather River below Oroville Dam, Reimers and other guides and anglers went over to the Sacramento as the water cleared.

The parking lot was very crowded at the Tisdale Boat ramp when I met Reimers at 5:45 am. The parking spots were filling up rapidly with boats and trailers as one boater after another launched their boats. After I packed my gear in the boat, we headed downriver. 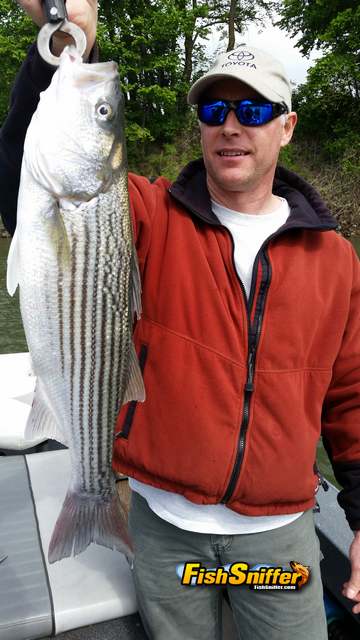 “We had a great day for big fish on Wednesday, when the couple fishing with me landed three fish weighing 20, 15 and 8 pounds and one 24 incher after launching out of Ward’s Landing,” he said. “We didn’t hook big numbers of fish, but the ones we caught were quality stripers. Chris and Daina Jimmerson of Citrus Heights released the 20 pounder, a female, and kept the other three fish, all males.”

The anglers fished with jumbo minnows at the “Red Sea” area below the Meridian Bridge.

“However, Ron Kelly and I went fishing yesterday in his boat out of Ward’s and the fishing was very slow,” noted Reimers, “so that’s why I decided to go out of Tisdale today.”

We started fishing at the Mud Flats, about 1 mile below Tisdale, usually a good spot for spring stripers. However, Reimers decided to go downriver after we didn’t get any hook-ups there. The north wind was blowing and it made power drifting with minnows difficult.

We then went downriver to Filipino Bend to get out of the wind. Of course, a flotilla as of boats greeted us there. Reimers hooked up the first fish of the day, a 16 inch shaker.

That fish was followed by a numbers of shakers hooked by both of us. Reimers also lost a couple of big fish – and I lost a decent fish right behind the boat.  Finally, I put a legal-sized fish in the boat. It was around 9 am, so we went to Horseshoe Bend, one of Reimers’ favorite spots to fish for stripers. 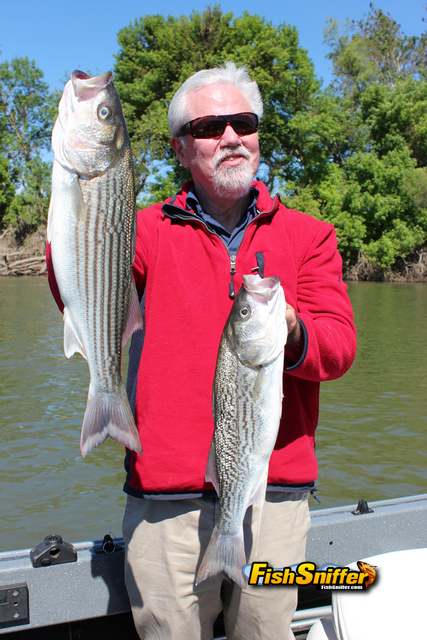 “Ron Kelly just told me on my cell phone that’s there are bigger fish down river, so we’re going to try down there,” said Reimers.

The action was much better at Horseshoe and the fish were definitely larger. We hooked and landed three more stripers, ranging from 19 to 23 inches, and kept our limits, calling it a day.

All of these fish were a lot of fun to catch, with their hard surges and bulldogged fights. I lightened up the drag a bit, allowing these scrappers to make some good runs. 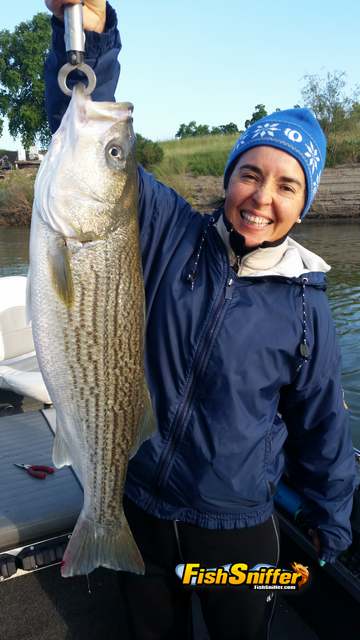 This should be a relatively good year for striper spawning on the Sacramento and San Joaquin rivers, since it has been the best water year since 2011.

The California Department of Fish and Wildlife has no new abundance estimates of adult striped bass, but they do have lots of trend information.

“The big picture is that striped bass cohorts have been poor for more than a decade,” said Marty Gingras, CDFW BDR-IEP Operations Program Manager. “It seems the 2006, 2008, and 2011 cohorts were not as bad as the others and that we see signs of those cohorts being relatively easily seen by anglers as shakers then as adults.”

Here is a link to some indices of juvenile striped bass abundance: http://www.dfg.ca.gov/delta/data/fmwt/indices.asp?view=single

“CPUE data from our work near Knights Landing shows that the number of spawners up that far has varied widely the last seven years.  The relatively good (but still poor compared to historical) CPUE in 2011 and 2012 was in large part due to high flow in the Sacramento River at the time,” said Gingras.”

The following link shows the recent variation in CPUE:

“Length data from our work near Knights Landing shows what look to be the relatively good (but still poor compared to historical) 2006, 2008, and 2011 cohorts having made spawning migrations, but not persisting long as obvious modes in the distributions.  When we age these fish, we’ll be sure about the cohorts,” he stated.

Here is a link:  https://nrm.dfg.ca.gov/FileHandler.ashx?DocumentId=112997

Recent CPUE data from party boats shows a recent spike that Gingras said, “is no doubt attributable to changes in fish distribution rather and catchability (e.g., fishing conditions) than to an increase in the number of fish in the population.”

For more information, go to: https://nrm.dfg.ca.gov/FileHandler.ashx?DocumentId=34815