“Kevin, Steven, Jeff and Sean put the hammer down on some stripers on my latest trip on the Feather River,” said Manuel Saldana Jr. of MSJ Guide Service. “Everyone had a blast hooking fish and yelling out. We caught limits ranging from keepers to 7 pounds.” 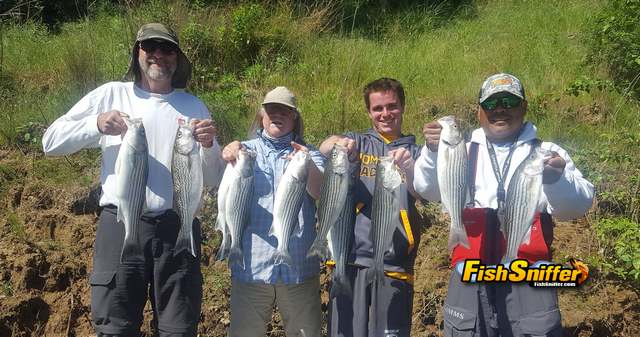 Saldana has been using jumbo minnows, swimbaits and cut baits on the river from Yuba City to Verona. “So far, the biggest fish we have caught on the Feather this season was a 12 lb. 30 inch male,” he tipped.

“Striper fishing is great on the Feather from Yuba City to Verona,” said Bob Boucke at Johnson’s Bait and Tackle. “The biggest fish we’ve weighed in the shop lately was a 39-1/2 pounder caught by a woman using a jumbo minnow. Minnows are producing the best action, but pileworms and other baits also work.”

Shore fishing is very good everywhere on the Feather. “Most people are getting their limits of stripers in the 20 to 28 inch range,” he said. “Some people are hooking 30 to 70 fish per day, but a lot of them are shakers.”