(Ione) Larry Hemphill, fishing guide, made a trip to Lake Amador to enjoy the beautiful spring conditions and hook some bass.

“Fishing was good for medium size bass and I was able to ‘’sight-fish’ my first of the year,” said Hemphill. “I think I was between spawns, as I only saw small to medium bass – and no big ones.” 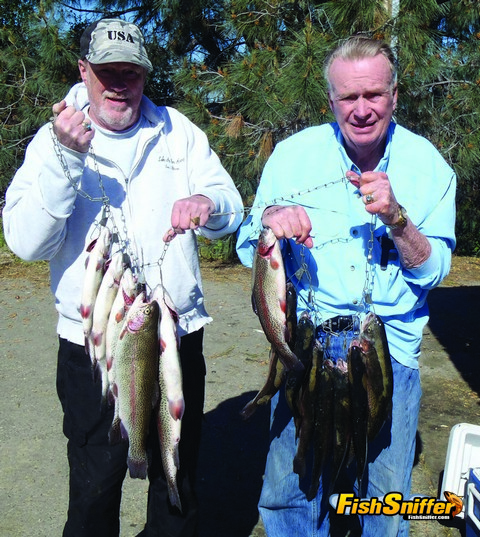 “I fished for an hour after dark and caught 2 more bass that hammered a jig. I caught 14-15 in the afternoon – lots of fun. Most were very shallow and active. I covered most of the lake and my best 5 were about 13-14 lbs.,” he stated.

He tipped, “Actually, one only need to throw Senkos this time of year – especially the wacky rigged ones. They can’t resist!”

Trout fishing continues to be good at Amador for shore anglers and boaters, with a double plant of 2400 pounds going in on April 13 and 15.

Bluegill are also starting to show. “Debbie Hall, her husband and two others landed a bunch of bluegill, keeping seven big ones for dinner,” said Debbie Grayson at Lake Amador Resort.

(Ione) Shore fishing had been slow at Lake Pardee since the lake opened on March 11, but that all changed on Wednesday, April 13, when a total of 8500 pounds of rainbows were released into the reservoir.

“Thanks to the plant of 8500 lbs of Nebraska Tail Walkers from Chaulk Mound Trout Ranch on Wednesday, it has been a great week for trout,” according to Pardee Lake Recreation. “Both the recreation area and the body of the lake have done well. The best baits to try have been Kastmasters, chartreuse or orange PowerBait and worms”

For example, Greg Diener from West Point landed his limits of rainbows, ranging from 2 to 10 pounds each, while tossing out a Kastmaster near Tom Sawyer Island. 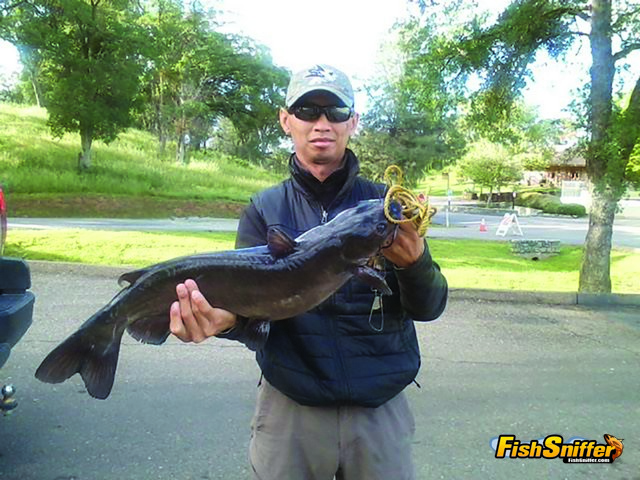 “It’s been quiet on the kokanee this week. The only report we received was they were hanging out at the mouth of the river 15-30 ft down,” the report noted.

Bass have been a little harder to find, but are still out there. The top baits are Robo Worms, drop shot rigs and spinnerbaits.

Fishing has been hot for big catfish in the recreation area, especially Rainbow Point and to the left of the Marina. PowerBait, anchovies and chicken livers are the best baits.

Charlie Boozer landed a monster 35 lb catfish at Rainbow Point. Along with his friends Eric, Manuel and Jason, they landed a total of six hefty catfish while soaking chicken livers at night.

Several large German browns were caught lately, including an 8 lb brown caught by an angler using a Cole lure in the lake’s main body.

The lake is 97 percent full and the water temperature is 68 degrees at the Marina.

(Burson) Crappie and trout were the big story at Lake Camanche this week.

“Crappie were found in the shallows around vegetation,” said Terry Willard of the Camanche Recreation Company. “Trout were found off shore at south day use in the cove beyond the boat ramp, by boat and at the pond.”

Popular baits for trout were garlic scented PowerBait, nightcrawlers behind a dodger and Rapalas. Anglers have been reporting warmer surface temperatures ranging from 65-69 degrees depending on the location.

Jason Singleton commented, “My boy Jase caught a trout measuring 24 inches and just over 6 pounds. We brought home ten trout, all in the 16 to 24 inch range. All were caught with nightcrawlers behind a dodger and Rapalas.”

Jeremiah Palacios and his fishing partner caught 27 crappie and six trout while fishing in the rain in the north shore cove.

Ricardo Rivas of Lodi fished with his family at the south day use area beyond the boat ramp to pull in two trout, topped by a 7.8 lb. rainbow, while using garlic scented PowerBait.

Timothy Salada of Sacramento landed a 2.14 lb. crappie while fishing in the north ramp cove.

Lake Camanche continues to receive large releases from Lake Pardee. At 97% full, Pardee is currently releasing 1,364 cfs into Camanche. This puts Camanche 33.71′ to spill level. Camanche is releasing 358 cfs into the Mokelumne River.

The north shore main courtesy ramps have re-opened due to this increased water level. Both the new covered berth and boat rental docks have also moved back to the cove in front of the store.

“This last week was the best trout bite we have seen all year,” reported John Liechty at Glory Hole Sports. “Most anglers targeting trout caught limits. The lake has come up over 80’ since the first of the year and all that fresh water has made the fish more comfortable and willing to bite.”

Liechty said boaters have had success trolling spoons near the surface and down to 30’. Some anglers have also reported luck trolling a string of flashers trailed by a nightcrawler.

Some kayak anglers have been doing well trolling a wooly bugger or a tube fly behind a teardrop flasher. However, bank anglers are experiencing very little success at this time.

Kokanee fishing is still slow, but that should change soon  “We have had a few reports of anglers catching kokanee while trolling for trout,” Liechty tipped

Black bass fishing remains good. “The bass are in transition to and from spawning areas,” he said. “Look for areas that have both deep and shallow water nearby. Look in creek channels, coves and pockets for springtime bass.”

“To find fish try using a reaction type bait. Spinnerbaits, crankbaits and small swimbaits work well to cover water and find areas where the fish are holding on that given day,” he stated.

“Once you have located a productive location, try slowing down and using soft plastic presentations, including weightless Senkos or hand poured worms fished on light weight drop-shot rigs,” he advised.

The crappie have responded well to the rising water levels, with many anglers catching fish up to 2 pounds around sunken brush and structure. For example, Art Smith and Gary McCoy caught over 30 crappie while fishing on mini jigs and live minnows on a recent trip.

New Melones Lake is currently holding 626,431 acre-feet of water. It is 883 ft. above sea level and 202 ft. from full. The water temperature is gradually rising, with the average being 58-64 degrees.

(La Grange) “The water is still coming up fast at Don Pedro. All the launch ramps are in the water and now that the temperature is up, the trout and salmon are starting to bite,” reported Monte Smith of Gold Country Sportfishing.

“On my last trip the surface temperature was up to 67 and we enjoyed a really good day of trolling. We started off rolling shad and pulling kokanee gear. That produced a couple fish, but it was slow going so I switched over to fast trolling with spoons and that really did the trick,” said Smith.

“The rainbows were in the mood to chase and we ended up with 11 trout. We also added a kokanee and a bass. It took a while for the fishing to get going at Don Pedro this spring, but now I think we are in for some really good action. May and June are typically great months to fish the lake and I certainly think that is going to be the case this year,” Smith concluded.