A series of much needed rain storms had swept through Northern California, drenching the region with muddy runoff. Everybody was saying that the delta was two to three weeks away from being fishable. The washed down sediment had made the water look like chocolate milk. Bait seemed like the only reliable option for stripers…but where? 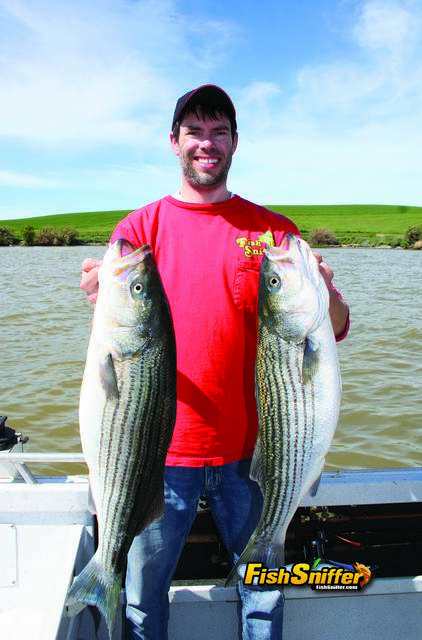 Several weeks earlier, I had fished near Rio Vista with delta regular Jimmy Brittain in cleaner water conditions. During our trolling trip, Jimmy had shown me some great new tricks. It was a fantastic 20 fish day, with ten keepers and ten shakers coming to the boat.

During that trip, I said I’d like to pay him back by showing him some of my bait fishing techniques. As the high, dirty water conditions flooded into the delta, it seemed like a perfect time to prove to Jimmy whether or not my bait fishing skills were up to par. We spoke on the phone, and made plans to fish the delta on March 26th.

On the morning of March 26th, I motored my rig into Brannan Island State Park just as the sun broke over the eastern horizon. After we had the boat in the water, I drifted out into Three Mile Slough to assess the tide situation.

We were at the very end of the incoming tide, approaching the high tide. Knowing that we would need some current in order to anchor up with bait, we trolled during the slack tide to pass the time.

Prior to the storms, the Sacramento River side of the delta had been holding stripers, so we headed in that direction. Because of the high tide, my boat’s canvas top barely cleared scaffolding on the Three Mile Slough Bridge, which was being painted. Although the water visibility wasn’t good, we took a shot at trolling while waiting for the current to pick up.

Around 8:00 am, the boats anchored in the area swung downstream, indicating that the outgoing tide was upon us. Without any hits trolling, we quickly picked up the rods and anchored in a spot near the Three Mile Slough Bridge in 24 feet of water.

Due to the high river flows, the outgoing tide was raging right off the bat. The massive dam releases upstream were pushing the outgoing tide towards the bay at breakneck speeds. I normally like fast tides when fishing with bait, but the flows were so fast that we could barely keep our baits on the bottom with 4 ounce sinkers.

“I think we’re going to have to move in towards the bank to get out of this current,” I relayed to Jimmy. After about 45 minutes of fishing, and only a few nibble bites to speak of, we decided to make the move.

Jimmy suggested that we try a shallow spot downstream from where we were fishing where he had success trolling in the past. I agreed that it sounded like a good plan, and we pulled anchor and made the move. 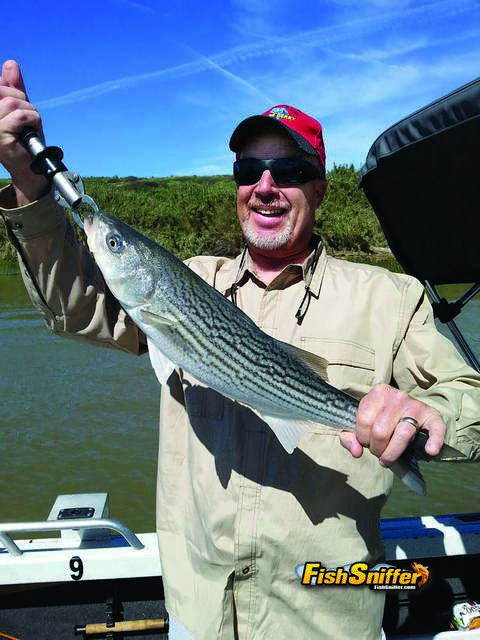 In high water conditions, if the current is too strong, you need to find an area with slower water movement. When fishing from a boat, if I can’t keep my bait on the bottom using four ounces of weight, then it’s time to move. Normally, shallower water or the insides of river bends will have less current. Sometimes you can see a ripple or current break at the surface to read the transition between fast and slow moving currents. Typically, you want to fish just on the slower side of a current break for striped bass.

Although our new spot didn’t have much of a current break, it produced less current because it was only half the depth of our previous spot. We immediately were able to switch our sinkers down to two ouncers. We had some initial bites, which at least proved that fish were moving through the area.

After about a half an hour in our new spot, we were pondering our next potential move if the new spot didn’t pan out. It wasn’t long after this when I noticed my rod tip dip a few times, and then pop back up. It slightly dipped down again, and this time it stayed down about eight inches from its starting point.

After switching to circle hooks over the past few years, I’ve learned that stripers will sometimes grab the bait and just sit there without running. This looked like a textbook example of that, so I started to slowly reel in some line with the rod still in its holder. The line tightened against the sinker, and then continued to load up against something more substantial.

I picked up the rod and felt pumping on the end of the line. I told Jimmy, “This might be a nice fish”. The long limber rod bowed into the shape of the letter ‘C’ as I tried to make ground in the fast current. The fish would burn some drag, and then I’d gain a little line back. Jimmy thought it might be a sturgeon, but I didn’t think so since it didn’t head shake or jump.

After about five minutes, I got it to the surface at the back of the boat. We got our first glimpse of whatever was on the end of my line. “It’s a nice striper,” Jimmy related to me. Just as he went to net it, the fish turned in the swift current and made another line-stripping run. After several repeats of this scene, the striper was finally in the net. It tapped out at 13.5 pounds on the scale.

From that point forward, the action steadily picked up. We were able to match the success of our previous trolling adventure, with 10 keepers and 10 shakers coming to the boat. A few of the keepers were saved for fish tacos, with the rest being released. All in all it was a great day, considering we were fishing in a delta that people were referring to as “blown out” or “weeks away from being fishable.”

The next time dam operators crank up Nimbus, Keswick, or Oroville, don’t cancel your delta striper fishing plans. Target outgoing tides, and pick a spot to soak bait that‘s out of the raging currents. If the fish are there, they will bite. We have fish tacos to prove it.