When I made it back to the trucks my heart was racing like a freight train. This wasn’t from the exertion of the hike. It was from onset of panic when I realized that my partner might be in real trouble.

He hadn’t shown up at the designated meeting spot despite the fact that I’d waited there a full hour beyond our designated meeting time. When there was no sign of him at the vehicles, a series of scenarios started running through my mind. Maybe he’d been bitten by a snake, fallen and broken a leg or perhaps he’d been the victim of a heart attack or even a stroke.

The only certainty was that my partner was in some sort of trouble and it was up to me to find him and get help if necessary. As a guy that spends a lot of time in the backcountry I’d contemplated situations like this many times, but this was the first time that I’d been confronted with anything remotely like an emergency.

I tossed my fishing gear into the truck, slipped on my backpack with all my emergency survival gear inside and started hiking back up the steep rocky trail as quickly as I could… 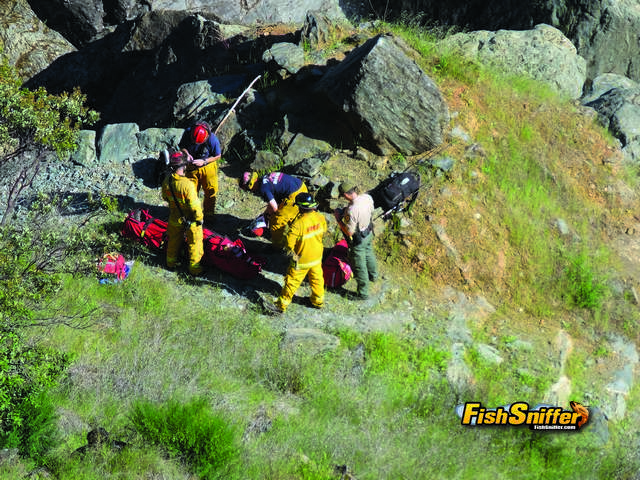 Let’s rewind a bit. As part of the Fish Sniffer staff for more than a decade I’ve had my share of exciting and memorable fishing trips, but the last two trips I took in the month of April where at once fun and exciting, enlightening and frustrating and in the end downright frightening.

The week started off well enough when Fish Sniffer Field Editor “Bass Jack” Jack Naves and I hooked up for a day of Delta striper fishing on April 27. Our plan was to start the day trolling and finish the day soaking chicken livers. Jack had been telling me about catching stripers on liver and circle hooks for a couple years and I was anxious to see it for myself.

When we dropped Jack’s North River into the Three Mile Slough at Brannon Island, it was already windy and the forecast called for even more wind as the day went on and there was a strong possibility of thunderstorms.

With weather threatening we started a trolling pass along the West Bank and caught a nice 5 or 6 pound bass within a minute of putting the lines in the water. After quickly releasing that fish, we got the gear back into the water thinking we were in for a memorable morning. Unfortunately, the bass weren’t on the same page and that was the only bite we got while trolling.

After running over to the San Joaquin and doing some exploring without positive results we headed back to the Sacramento for the afternoon. We were greeted by a strong outgoing tide and a vicious wind was blowing the opposite direction. Getting the boat to sit still enough to fish was a challenge in the 2 and 3 foot rollers, but Jack got us situated just off Sandy Beach right on the edge of a drop off.

The liver bite was absolutely amazing. We didn’t catch anything big but we had steady action the entire time we fished. Several times all four rods were going off at once. The bass were largely in 16 to 20 inch class, but the cool thing about using circle hooks is that 99% of the fish are lip hooked. This means that you can land and release shaker bass without harming them.

When all was said and done, we probably caught 15 to 20 bass and I kept a pair of keepers for dinner. I cubed up the fillets and deep-fried them in batter the next night. I served the fish with home made battered onion rings fried in bacon grease. Don’t tell my doctor, but it was darn good!

Jack and I are already planning our next adventure. We are thinking Pardee kokanee. I’ll keep you posted!

Three days later, the general Sierra trout season opened on April 30. For the opener I hooked up with a long time friend of the Fish Sniffer, norcal fishing expert and High Sierra Guru, Chris Hammond.

Chris and I had communicated a good bit via Facebook but we’d never actually met. Yet I knew of his exploits from Fish Sniffer Editor Dan Bacher that has shared a number of adventures with Chris over the years.

I consider the Middle Fork of the American my “home river” these days. When I learned that Chris was also very familiar with the Middle Fork we settled on the Drivers Flat/Ruck-A-Chucky section of the river for the opener. The plan was to park near the campground and then hike the canyon up river to the Ruck-A-Chucky Rapids.

The hike isn’t far by map, but the going is crazy tough. The canyon walls are nearly vertical in many areas and the going along the river is hampered by huge slabs of loose angular granite, poison oak and big tangles of Himalayan blackberries. And  oh yes, there are rattlesnakes too.

Chris met me at 7 and a while later we we’d parked in a pullout beyond the Ruck-A-Chucky campground and started hiking up stream.

The Middle American is an epic western river and it was running big and sassy on the opener. Typically, the river fishes best later in the day, but we scratched away catching and releasing acrobatic wild rainbows in the 10 to 14 inch class. We were hoping to hook one of the river’s big browns of course, but the rainbows were fun.

I got a couple on worms, but most of my fish came on my go to ¼ ounce yellow and black Panther Martin spinner. Chris was a fan of the worm, but he was pitching lures too.

As we hiked we chatted about the history of the canyon and at one point we came upon a rattlesnake sunning itself and took a time out to shoot video.

It must have been around 11 o’clock in the morning when we came to an especially tough section of terrain. I opted to go up a 60 degree slope to get around it, while Chris crawled through the teeth of a huge boulder slide that was overgrown with berries.

That was the last time I saw Chris. We were supposed to hike out of the access trail to Ruck-A-Chucky Rapids at 1 o’clock. I waited there until 2 and then hiked back to our trucks as described at the beginning, thinking that maybe somehow I’d missed Chris and he was back at the parking area waiting for me.

As I hot footed it back to the rapids I was formulating a plan to drop down into the canyon and start backtracking down river hoping to stumble over Chris. I kept blowing an emergency whistle I have in my pack, but I wasn’t sure if he’d be able to hear it over the roar of the river.

When I reached the part of the trail overlooking Ruck-A-Chucky Rapids I immediately spotted Chris slumped among the rocks in an almost fetal position with his cowboy hat obscuring his face.

After much yelling I roused Chris. Through gestures and semi-audible shouts, we communicated.

Long story short Chris need help. I didn’t know what the problem was, but it was clear that he wanted me to call the authorities!

Off down the trail I went searching for a cell phone signal. Finally, about halfway back to the trucks I got through. First I spoke to my wife and told her the location and to call 911. I wanted her to have the info incase I lost the signal.

Next I called 911 myself, relayed a bit of information and then lost contact. I tried to call back repeatedly without results and then headed back to Chris.

He was slumped again, but I got his attention and gave him the thumbs up. I waited on the trail expecting a fire engine or California State Parks truck to arrive, but I got a surprise when the first responder on the scene was a CHP helicopter. They saw me and I pointed out Chris. They hovered for a bit and then started circling us.

A while later fire trucks from Foresthill and the CDF showed up, as did a State Parks Ranger.

The young tough CDF firefighters and the ranger plunged into the canyon with a full array of emergency gear while I stayed on the trail and chatted with a Battalion Chief.

After listening to a conversation on his radio he told me, “Your buddy has taken a couple pretty good falls. His back and leg are messed up and his vitals are a little off. The team in the canyon are going to rig him up and in about 20 minutes the CHP helicopter is going to medevac him to the hospital in Roseville!

I was worried about Chris, but I knew he was in good hands. In the end, he came away banged up, but unscathed and now we both have even more respect for the canyon then we had before.

The first responders were true heroes that day, from the guys that rushed into the canyon to the helicopter crew that navigated the narrow canyon despite stiff gusty winds.

I hope I never need to call for a rescue again, but if I do it’s great to know that there are teams of brave, strong, talented folks ready to help!