The 13th Annual Kokanee Power Shasta Trout & Salmon derby was held the weekend of April 30 and May 1, 2016. I headed up Thursday afternoon with the Fish Sniffer 21’ Rogue Jet Coastal in tow. As I passed Bridge Bay north of Redding I was greeted by a gorgeous sight – a brim full Lake Shasta shimmering in the sun!

I arrived at Tsasdi Resort in Lakehead and met Dave Barsi and Steve Fistler at our large cabin. Soon Bruce Wicks and Al Fiske of Foresthill and Rob Bundy of Auburn and Matt Behrens of Santa Clarita arrived after fishing for a few hours. They all reported the same results – lots of water and few fish. We had a wonderful barbeque in the big 3-bedroom cabin and looked forward to fishing for 3 more days!

Friday dawned clear and cool, and we all went our separate ways on the big lake to see if we could discover a pattern to the trout. I picked up my partner, John Brassfield, after his annual houseboat trip with his family and friends. He reported the same thing – the trout were all spread out and not easy to catch. 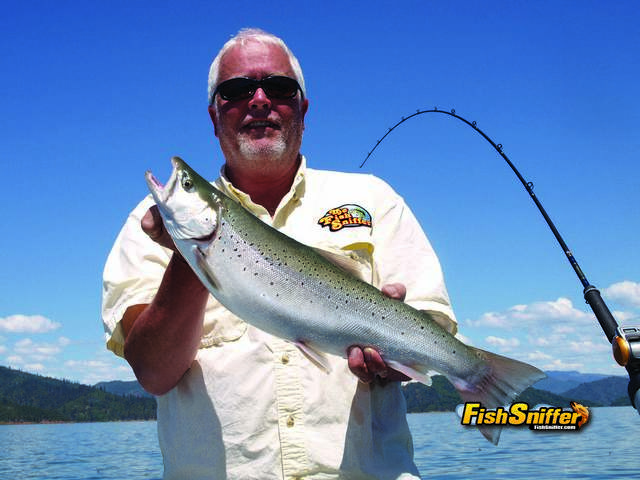 The water temperature was in the low sixties, but we were marking very few fish on the Lowrance HDS 9, and the few trout we caught were all very close to the surface. We ran all over the lake, putting the new Evinrude G2 200 hp outboard to good use. We trolled at about 2.5 mph with the Evinrude 15 hp. kicker motor with a large variety of spoons and plugs to see what would work.

Back at the cabin at Tsasdi resort, we all compared notes. Our group had fished all over the big lake, from the upper Sacramento arm to the Pit River to the dam and Dry Fork. We had all caught a few small rainbows on a wide variety of lures, colors and sizes. The only thing that ran true was that all the trout were caught within 15 feet of the surface.

John had caught a 21-inch brown that was very thin. Bruce really messed up – he caught a beautiful 4-½ pound brown on a top lined silver Humdinger! Too bad he caught it on Friday when it didn’t count. 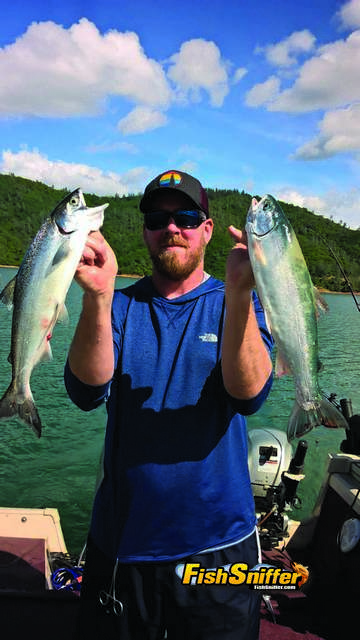 Saturday morning dawned clear and very windy with north wind 20 to 30 miles an hour and gusts that had to be over 40! John and I started fishing inside Elmore Bay on the Sacramento River arm and then trolled all the way down to Waters Gulch. There were times when I shut down the kicker motor and the Minn Kota Autopilot electric motor and just drifted at 2.5 to 3 mph.

The fishing was still very slow. John hooked and landed a decent 18 inch rainbow top lining a red/white Tasmanian Devil. I finally landed a smaller rainbow on a red cop car Exel spoon, also top lining. We caught a couple more smallish rainbows, and we at least had our 4 trout to weigh in.

At the mouth of the Pit, we saw a few marks consistently at 50 feet down, so we both put one line down at that depth. And we both caught a couple of small king salmon. These obviously weren’t going to get us in the money, so we released them and continued fishing shallow for trout.

At days end when we weighed in at the Basshole Bar & Grill, we had a grand total of 6.57 pounds for 4 trout, which was good enough for 11th place on Saturday. All our buddies had done about the same – no one was bragging about their day.

The event dinner was at the Lakehead Lions club, and the food and camaraderie was excellent as usual. The big fish of the day was a 4.63 lb. brown. We all had a good chance of being in the money on Sunday, especially if we could find that “one big fish”. 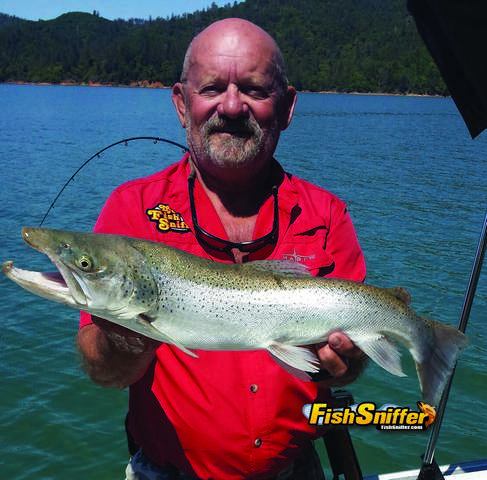 Sunday morning we all headed out early from our slips at Tsasdi Resort to a much calmer and warmer morning. John and I went directly to the mouth of the McCloud, because that is where the larger fish we had heard about were caught. We fished there for a couple hours and managed to catch a few small rainbows on top lined Kastmasters and Tasmanian Devils.

We then headed to the east side of the dam near the Centimudi boat ramp, where we have ad success before. The wind had calmed to just a slight breeze and we landed 2 more decent rainbows and at least had our 4 to weigh in. We decided to troll over to the west side of the dam as time was getting short before the final weigh in at 3 pm.

We were just outside the big orange marker buoy 1000 feet off the middle of the dam when we marked a fish at 35 feet. John dropped his downrigger to that depth with a blue and silver Apex Trout Killer. We hadn’t gone 100 feet when the line jerked off the downrigger and started ripping off John’s Fenwick rod.

He grabbed it and immediately shouted “this is a good fish – a real good fish!” His rod was still doubled over when the trout jumped – twice – 200 feet behind the boat, and continued to tear line off the reel!

I killed the Evinrude Kicker motor, slowed the Minn Kota electric to a crawl, and cleared our other 3 lines. John was just beginning to gain some line back when the big trout surfaced about 150 feet behind the boat. He was about 15 feet away from the big orange buoy and just seemed to be resting on the surface – we could see him gleaming in the sun.

John said, “PK, something is wrong – I can’t move him”. He was leaning into the rod, and pulling firmly, but the trout wasn’t moving. Could he be caught in a line or rope dangling off the buoy?

We didn’t know what to do.  Suddenly, a shadow soared over the boat from the west, and a large bald eagle was diving at the trout! The huge bird hovered over the trout for a moment, and we started screaming at it – “Get the hell out of here!!!”

Evidently the fish saw the eagle because he dove wildly and tore another 50 feet of line off the reel! The eagle flew away, thank God, and John continued to fight the trout in the open water. Finally, after ten harrowing minutes, I netted a beautiful 4-½ lb. brown! We had finally found our “one big fish!”

After weighing the fish, we figured we had just entered the top five in the derby. As tough as the bite had been, we didn’t think anyone else would have two big fish in one day! At the weigh in back at the Basshole, we were elated to be announced as the winners of the 2016 Spring Shasta Derby!!