The 29th annual “Hooked on Fishing, not on Drugs”** children’s event last weekend at Horseshoe Lake in Chico’s Upper Bidwell Park was again highly successful, though unseasonably chilly weather in the early AM hours kept the crowds away for the first hour or two of the morning. Approximately 1,800 children showed up to catch their first fish. As such, it continues to be one of the largest single-day children’s fishing events in the entire USA. 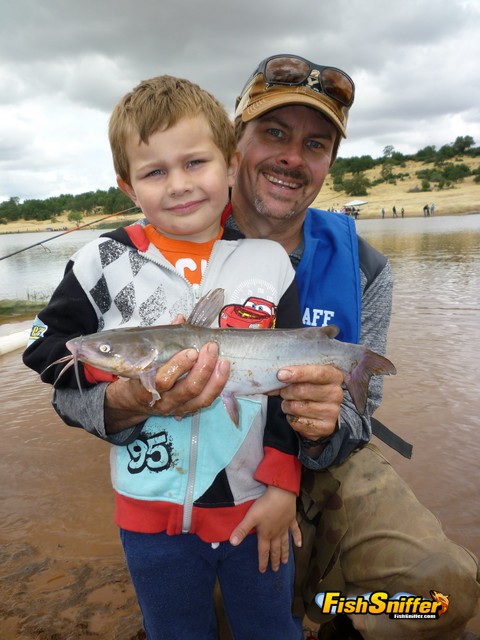 The early chill also put a bit of a damper on the bite until about 8:00, when the fish finally started to get active. The bite stayed steady until the last hour of the event, when the fish backed off the form the shoreline, and it required an extra-long cast to get to them.

The grade of catfish was most in the 1 and 2-pound class, but some 4-plus pounders were mixed in. At least a couple in the 9-pound range ended up on the stringers, and several more quickly snapped the line of kids who had kid-type tackle. The kids really had fun, and squeals of delight could be heard from multiple directions and across the water.

Little 4-year old Justin Giampaoli of Chico has caught trout before, but reeled in his first-ever catfish during the event. “I really like getting fish” said Justin. “I like to go fishing and have fun”.

Likewise, 4-year old Eli Gonzalez of Chico had caught trout before, but managed to wrestle in a hefty 5-pound catfish out of Horseshoe Lake. “I like having fun fishing and hanging out with my cousins”, no doubt echoing the feelings of most of the kids in attendance. 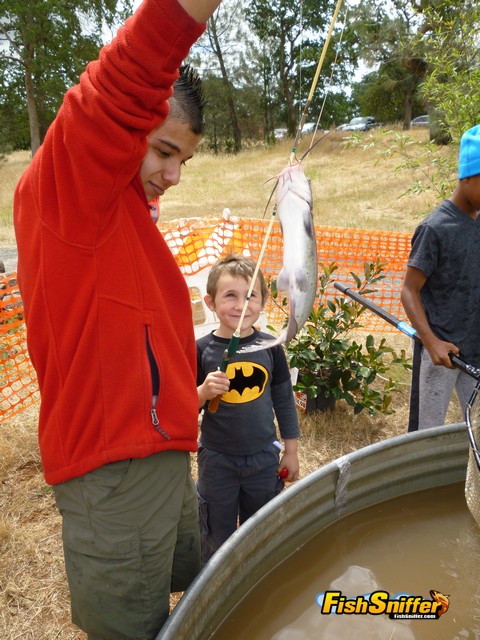 In the “Huck Finn’s Pond” area, the littlest anglers age 1 to 5 found that the fish were always biting. Toddlers and even kids in strollers found that water-filled livestock troughs and pre-hooked catfish were the answer to short attention spans. Over 350 little ones left the kiddie pool area with a nice catfish and numerous memories.

Event veteran, 20-year old Hanne Henriksen of Chico, started out coming to the event as a 1-year old with her father, and now works as a volunteer, supervising the kiddie pool area.

“The kid’s pool area is guaranteed to put a smile on your face”, remarked Henriksen. “The tiny kids are so excited when they catch their first fish, though sometimes they are a little scared to get close to it.”

A special program run by the Chico Bass Club and Shakespeare Fishing Tackle awards a new rod and reel combo to any child who catches and releases one of the lake’s resident bass, carp, or herps. A total of 8 Shakespeare combos were awarded this year, seven for releasing a bass, one for a carp, and one for a turtle.

The yeoman task of cleaning the hundreds of catfish fell to the Chico Rotary Clubs. A perennially popular aquarium display of the fish, herpetological, and invertebrate life of the lake is run by the Chico Area Flyfishers. The 500 loaner rods are rigged up in a joint effort by the Chico Bass Club and Paradise Bass Club. The loaner tackle included special Danielson “Enviro-Quest Steel” sinkers, as required by lake regulations, some 5,000 live nightcrawlers were donated by Oro Dam Bait, and the Chico Rod and Gun Club generously allowed the use of their on-site facilities. 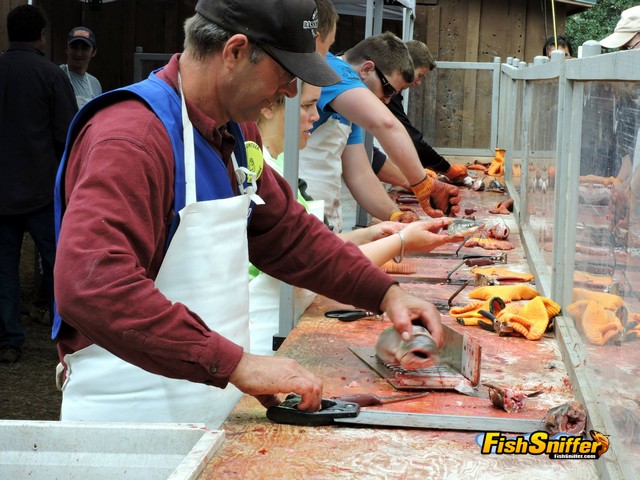 A little more than half of the 8,000 pounds of catfish stocked for the event were harvested, and the remainder will provide an opportunity for kids to fish in this popular city park lake for the rest of the summer. Hundreds of people continued to fish Horseshoe Lake in the days after the event.

Event chairman [and co-founder] Pete Giampaoli said “Our goal is for every child to have the opportunity to catch a fish, and hopefully give them an alternative to the many negative influences that are all around them. Fishing is a sport that anyone can participate in for their entire life. I would also really like to thank all of our great volunteers and those who contributed to help make this event possible.”