I felt a fish grab the plastic grub I had just thrown near the shoreline rocks in the early morning shadows at Jackson Meadows Reservoir. I set the hook and felt the surge of a good-sized fish as it struggled to free itself of the hook.

After it made a couple of runs towards the bottom, I slowly worked the fish toward the boat. I saw the brown and reddish colors of a trout, thinking it was a colorful male rainbow.

However, once Brett Brady of Bare Bones Guide Service got it in the net, I realized it was a Lahontan cutthroat similar to those I had fished for in Pyramid Lake back in October. It measured 22 inches long.

“That’s on the lower end of the size of the cutthroats we’ve caught lately,” he said. “These fish go up to 5 pounds.”

It was one of two cutthroats we hooked the lake that day; the other fish I lost right at the boat.

Located on the Middle Fork of the Yuba River in Nevada County at 6040 feet above sea level, Jackson Meadows is known for its robust and abundant rainbow trout and its wary browns, but it also features bonus Lahontan cutthroat, as I discovered that day.

The California Department of Fish and Wildlife (CDFW) now plants both catchable and fingerling rainbows and fingerlings in this forage-rich reservoir located in a former mountain meadow.

“At least over the past 15 years, we don’t have any record of any fish planted in Jackson Meadows besides rainbows or browns, with the exception of 86,000 fingerling brook trout stocked in 2008,” Murphy said.

The Lahontan cutthroat found in the lake have may have come from nearby waters, such as Independence Lake or the Truckee River and its tributaries. A photo of the cutthroat is displayed on the cover of this magazine.

Anyway, trout fishing has been very good at Jackson Meadows since the road to the lake became accessible in late May. On his first trip to the lake this season, Brady and a couple of clients ended up catching and releasing 20 trout up to 4 pounds while throwing plastic grubs on jigheads along the shoreline.

Brady and the fishermen had hoped to get on the lake before a late season snowstorm hit the lake. However, it began snowing as soon as they got to the lake and by the end of the trip they had two inches of snow in the boat, but a lot of great memories of catching quality rainbows and a few cutthroats.

On the next trip, the anglers caught 6 trout on grubs first thing in the morning and then finished up with another 15 rainbows while trolling nightcrawlers. The big highlights of the trip were a 5 lb. rainbow that they caught while casting lures and a 3-1/2 lb. brown that they landed while trolling.

On the day we fished, we got on the lake about 6 am. “The lure bite will shut down after the sun gets on the water and the fish begin to get spooky,” said Brady, “so we need to get there early. After the lure bite slows down, we will start trolling.”

We landed a total of 4 fish while tossing lures, along with losing several fish and missing some bites. Brady caught and released a beautiful rainbow he estimated to be over 4-1/2 pounds. After the sun came up, the fish became very spooky.

We then switched over to trolling nightcrawlers 12 to 14 inches behind Gold Star Dodgers at several locations. After the first couple of spots, including an area near a couple of underground springs, didn’t pan out, he tried where he had caught some big trout on Monday, including the 3-1/2 lb. brown.

Over the next couple of hours, we experienced very good action while trolling with downriggers around 20 feet deep. The fish were particularly scrappy and feisty in the lake’s cold water.

We had several double hook ups, including when we landed two big, fat quality rainbows 19 inches long each. We ended up keeping 9 rainbows ranging from 14 to 19 inches and the one 22 inch cutthroat, as well as releasing several other fish, by 1 pm.

The fish whose bellies we examined on our recent trip were stuffed with crayfish, Lahontan redsides, and worms, an indication of the great food chain found in the reservoir.

As good as the fishing has been to date at the lake, Brady said it is slower than it normally is in the spring.

Retired CDFW biologist John Hiscox estimated that the rainbow trout fingerlings that grow up naturally in the lake contribute 40 to 50 percent of the catch.

“This high rate of fingerlings’ contribution to the fishery doesn’t happen in many lakes,” said Hiscox. “It tells us that this a rich ecosystem.”

The typical brown landed in the lake averages 3 to 5 pounds, although larger fish have been taken. Brady’s largest brown, just a 12 pounder, was taken on a trolled Rapala over two decades ago.

“The biggest browns are generally caught by the people who get on the lake first in the spring and fast-troll with Rapalas and stick baits along the shoreline,” Brady tipped.

Unfortunately, the best time to target browns is in the spring before the lake becomes accessible to boaters or in the late fall before the lake ices over. By the time the road opens and boat launching becomes available, the wary browns have already moved into the deep water where they are very difficult to catch.

Another fish that has been witnessed historically in the lake is the Arctic grayling, though none has been documented in reservoir catches for nearly two decades.

Hiscox saw a 14 inch grayling taken by a boater trolling for trout in 1997. The grayling were never planted in the lake, so Hiscox believes think that they came out of another lake in the mountains above Jackson Meadows.

Shore anglers and boaters occasionally take wild brook trout at Jackson Meadows, although Brady has never seen one caught. There is also a resident population of brown bullheads up to 2 pounds that nobody targets.

Trout fishing is good from the spring, when the lake opens, to the early winter, when it receives the first big snow of the season. The lake freezes over most years and people access the lake via snowmobile, but the road to the lake is not plowed after the road becomes icy and covered with snow.

Size and Location: Jackson Meadows Reservoir, located on the Middle Fork of the Yuba River, is located at an elevation of 6036 feet in the Tahoe National Forest in Sierra County. The reservoir is 1,000 acres in size and holds 69,200 acre-feet of water when full. Since this is an irrigation supply, the reservoir level drops as the season proceeds. This reservoir is situated in a forested valley with the Sierra Crest and English Mountain providing a scenic backdrop.

Boating: All craft are allowed, but noise level laws are enforced. The boat ramps include Pass Creek on the east shore and Woodcamp on the west shore.

Fishing Season: Fishing is allowed year round, but the lake freezes over in the winter and the only access is by snowmobile. The CDFW plants both catchable and fingerling rainbows in the lake. The wild brown population is supplemented every several years by fingerling and catchable plants.

Campgrounds: There are seven campgrounds available in the recreation area: Call 1-877-444-6777 or make on-line reservation.

Findley Campground: West side, 14 campsites (some trailer spaces), flush toilets. This is a fee area; reservations accepted.

Fir Top Campground: West side, 12 campsites, flush toilets. This is a fee area and no reservations accepted. 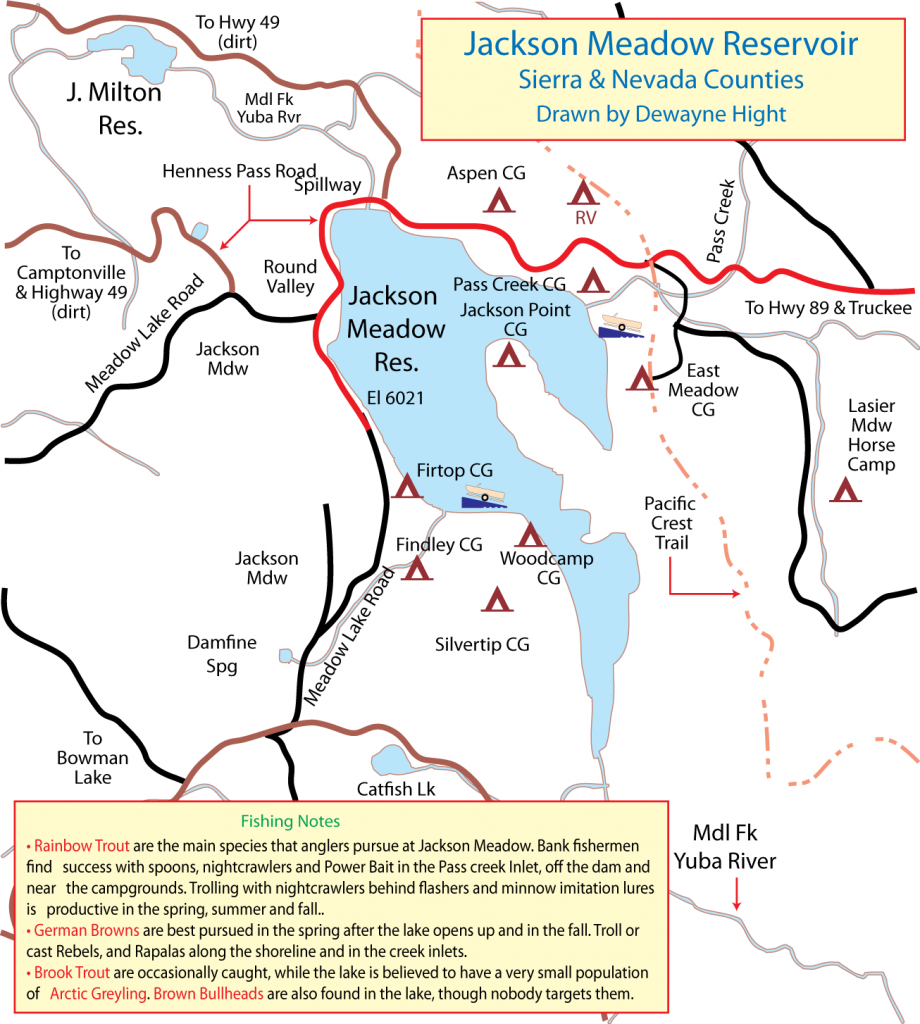