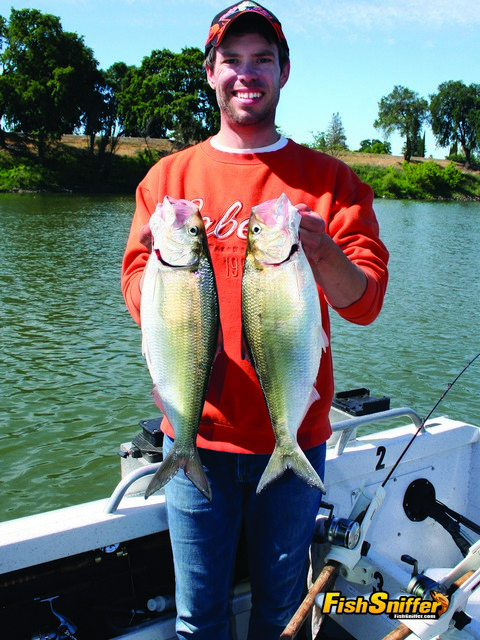 It’s been a good thirty years since I took a dedicated American Shad fishing trip from a boat. Year after year, “We should go shad fishing…” never seems to pan out. However, this year I finally dropped the hammer and set up a shad fishing trip with my dad.

On May 22nd, I launched at dawn on the Sacramento River with my dad and two kids. We motored upstream to a bend in the river known locally as ‘The Minnow Hole’. I have a lot of family history at this location, as my dad grew up in nearby Land Park and fished there often.

My Grandpa used to make and sell shad darts at The Minnow Hole after he retired back in the ‘60s. Located in Sacramento, it’s several miles upstream of Garcia Bend off of 43rd Avenue. It’s a popular spot for both shad and salmon anglers because of its easy bank access.

I anchored in about eighteen feet of water a few hundred yards downstream from the bank fishing area. The fact that nobody was lined up casting for shad had me kind of worried. Classic fishing quotes like, “They went through last week”, and “It’s a late run” started churning through my head.

Before hitting the water, I did some research and learned some new techniques I wanted to try out. Back in the day, we would just cast and retrieve small lures called ‘shad darts’ three feet behind a half-ounce barrel sinker. I learned that nowadays, many folks vertically lower rock-fishing style rigs into the current and wait for schools of shad to pass by.

During our trip, we employed dropper loop surf leaders similar to what would normally be used for catfishing or ocean bottom fishing. There is a sinker clipped to the very end of the line, which rests on the bottom. Above this sinker, there are a pair of six inch leaders coming off of the main line. These two leaders are spaced about a foot apart above the sinker.

You drop the rig straight down until the sinker rests on the bottom. Once the line is reeled tight, the main line stays vertical. The two leaders sway in the passing river current a few feet off of the bottom.

We used size 8 octopus hooks at the ends of our leaders, with really small plastic grubs threaded onto the hooks. I couldn’t tell you the exact size of the grubs, but I would guess that they were between a half inch and one inch in length. We lowered two of the setups straight down to the bottom, while our other two rods were cast back 20 and 30 feet behind the boat respectively.

It wasn’t more than ten minutes into the trip when my rod dipped several times in the rod holder. I quickly reeled as fast as I could to set the hook, and the lightweight kokanee rod doubled over. I lifted the rod and brought our first shad to the boat. “It’s a little male,” my dad quipped as he netted the fish.

The morning wasn’t on fire by shad fishing standards, but by ten o’clock we had eight shad in the cooler. Satisfied with our catch, we headed back home with the perfect amount of fillets for canning.

Shad are mild in flavor. If you lightly smoke and pressure-can them, the bones dissolve. The final product makes for a great substitute in any tuna salad or salmon patty recipe. Typical fish recipes aren’t great for shad because of their bones. Search the web for the best ways to fry or prepare shad if canning isn’t your thing.

It was interesting to see the progression while schools of shad headed up past our boat. The rod that was cast furthest back would get hit first, and then the school would make its way up to the other rods.

It illustrated how much of a schooling fish they are. All but two of the fish came on white grubs, with the others coming on pink and green. Unfortunately, we missed a lot of bites, so I think my techniques need a little improvement.

Next time, I will probably try some bigger hooks with slightly larger grubs instead of the tiny ones. I will also try holding one of my rods so I can set the hook faster. Another thing I may try is a three-way swivel instead of the surf rig, since the leaders with the grubs seemed to twist over time. Jigging the rod seemed to produce some of the strikes, so I may do more of that too.

American Shad are a great species to fill the void after stripers have left town. The males run two to three pounds, while the females can reach up to seven pounds. Late-April through mid-June will produce shad in Sacramento, but the best time is typically in late May. Now is the time to get your shad on!