Traditionally, June is great month for Bay Area saltwater anglers, and this June is shaping up to be one of the best in memory. The best salmon bite in the state is raging in the coastal waters beyond the Golden Gate Bridge. Inside San Francisco Bay the action is very good with halibut, striped bass and other species such as sharks on the menu.

Anyone that has followed the Fish Sniffer for long, knows that I’m an avid saltwater angler. Unfortunately, with recent challenges in formatting and printing the magazine I’ve had little time to get on the water, but that’s about to change. I’m slated to host my annual live bait potluck couples trip on Berkeley’s California Dawn in a few days. After that the fish better be cautious, because I’m going to be chasing salmon, lings and rockfish in the coming weeks!

In my view both salmon and halibut fishing have been surprisingly good this season. So good in fact, that it feels a lot like the “good old days.” Back when our fisheries were much stronger, having halibut and salmon action in May and June was a given, but for the past few years the early season action has been sketchy with a few halibut being caught here and there and the salmon holding in deep water well offshore.

So far this year there seems to be big numbers of halibut inside the bay, stripers have arrived in force and the salmon are in close and feeding on local schools of bait. 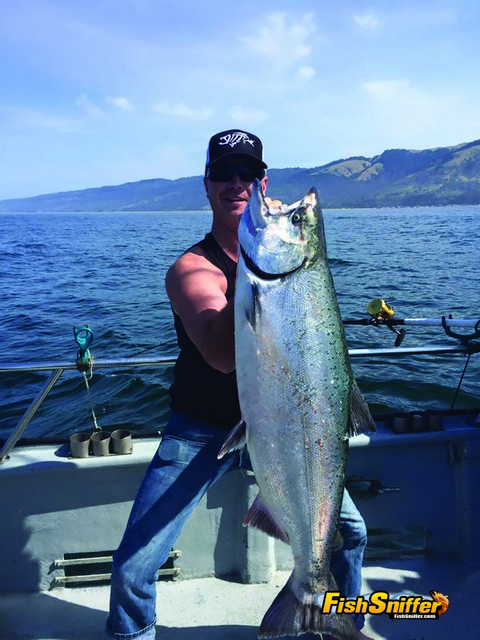 “Salmon fishing has been good to very good depending on the day,” disclosed Captain Joey Gallia of New Easy Rider Sportfishing. “There is a good amount of bait in the form of anchovies and sardines just beyond the Golden Gate and that’s what the salmon are feeding on. Generally, at this time of the year we have to run well offshore to find fish, but that’s not the case this year. It’s really nice having fish close to port. It gives us more fishing time and when the bite is solid we are often in early with full limits.”

“Some days the fish can be a little picky. When that happens the fish are lightly hooked and we tend to lose a significant number, but we get a lot of action. Other days the fish are slamming the bait and limits come pretty easy. The fish are good quality. I’d say our average fish is 12 to 15 pounds and we are scoring anywhere from 10 to 20 keepers per day,” said Gallia.

On the live bait potluck front things are equally as exciting. 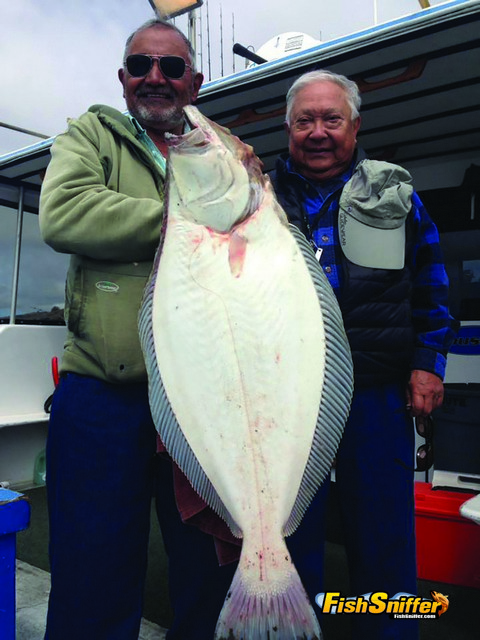 “Quality live anchovies are available and potluck fishing has been exceptional so far this season,” disclosed Captain James Smith of California Dawn Sportfishing. “There seem to be big numbers of halibut inside the bay right now. We’ve been getting lots of big fish which is great, but we are also seeing lots of short juvenile fish and that’s a very good sign for the future. My anglers have had several 20-pound class fish this week and this morning we’ve already landed and released a dozen shakers.”

“The last time we had lots of small halibut in the bay epic action followed for the next couple years. Hopefully that pattern is going to repeat itself,” said Smith.

“Stripers have arrived and are making a solid showing on the rocks. When the tides are big limits and near limits of stripers are pretty easy. Of course when the tides are big the halibut action slows. When the tides are small the bass action declines, but the halibut come on strong. I think we are just scratching the surface on the stripers. There are still big numbers of fish coming down from the Delta. It seems like the bulk of the fish haven’t even arrived in the bay yet. All in all, we are off to a good start and things are going to get even better. We haven’t even started targeting rockfish and lingcod seriously yet,” exclaimed Smith.

Captain Chris Smith of Captain Hook Sportfishing also had some very positive things to say about the action available inside S.F. Bay.

“You can run just about any sort of trip you want right now. Salmon, halibut, bass, bottomfish and even sharks are on the chew,” Chris related. “On my last six pack trip we targeted leopard sharks inside the bay and had a ton of action. Once everyone had a pair of sharks in the box we turned our attention to stripers and mopped up full limits. It just doesn’t get any better than that!”

If you’d like to get in on the outstanding Bay Area saltwater action that is now on tap you’ve got plenty of options.

The folks at the Emeryville Sportfishing Center can put you on halibut, stripers, rockfish, lingcod and salmon. You can reach them by calling (510) 604-0601.

If a six pack trip sounds good, give Captain Chris of Captain Hook Sportfishing a call (510) 322-0493 or Captain Steve Mitchell of Hook’d Up Sportfishing at (707) 655-6736. Both these skippers run out of Berkeley and will put you on halibut, bass, salmon, sharks, lings or rockfish.

For a trip out of San Francisco, you can’t go wrong with the Bass Tub. They fish live bait potluck trips inside the bay and chase salmon on the ocean (415) 456-9055.

In San Rafael Captain Gordy Hough of Morning Star Sportfishing is one of the best when it comes to live bait fishing for bass and halibut. You can reach him by dialing (707) 745-14