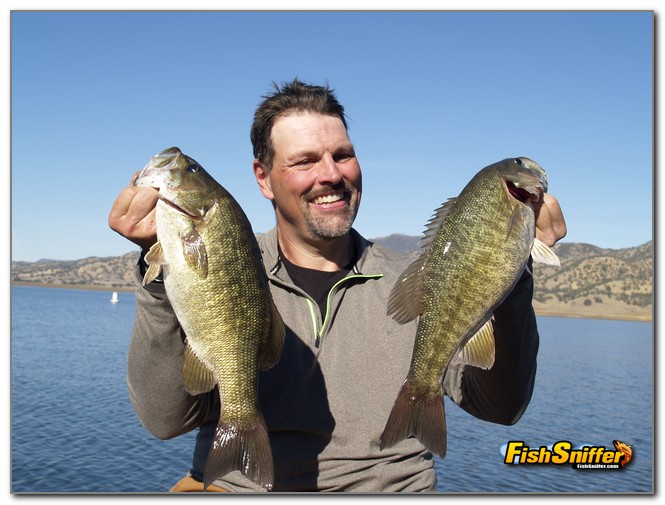 Larry Hemphill, fishing gude, reported top-notch bass fishing at Lake Berryessa with a couple that flew in from Texas to fish the lake.

“Fishing was very good during mid-day as a breeze came up about 11 pm – and so did the bite!” said Hemphill. “We landed more largemouth than previous trips in the past several years!”

“We caught most of our bass during those 2 hours in about 8 to 15 feet of water,” said Hemphill. “The wind soon died and so did we (of the heat)!”

“I also had a great trip last Friday. Fishing was excellent for many hours and nearly all bass were over 2 lbs. The biggest was a spawned-out largemouth weighing 4 lbs. Smallies up to 3 lbs 10 oz were hitting nearly all day,” he tipped.

“Last week we used Robo Worms of several colors. Yesterday, morning dawn was the best color as it was last year in early summer. Yamamoto creature baits were good last week, as were Senkos. The bass were a little deeper last week, Both trips were in the narrows and main body (mostly west side),” Hemphill concluded.

Trout fishing reports have been scarce lately, but fishing had been improving in recent weeks.

“Look for big bait schools by Big Island and in front of Skier’s Cove,” advised Tom Dudenhoeffer at Sweeney’s Sports in Napa. “Drift live minnows or troll Rainbow Runner and Apex spoons from the surface to 25 feet deep.”