It had been a tough morning. The kokanee bite of the week before, when two anglers fishing with Monte Smith of Gold Country Sportfishing had caught 9 kokanee in the 15 to 16 inch range and one big holdover rainbow, had shut down.

“I don’t know where the kokanee have gone,” said Smith. “In the Kokanee Power Derby on Saturday, fishing was very tough, and some people didn’t hook any fish. But that was during a full moon”.

We trolled with a variety of Micro Hoochies, tipped with Pautzke-scented corn, behind Vance’s Dodgers, at a variety of depths from 45 to 85 feet, but the fish didn’t want to bite.

After not hooking any kokanee all morning, Smith decided to target rainbows in the main body of the lake using his homemade spoons, Chucker-Ts, at around 40 feet deep.

At first, none of the rainbows wanted to play either. Then one of the rods dipped and line began pulling off the reel. I picked up the rod, a little nervous about it because we hadn’t boated a fish yet that day and I was afraid of losing it.

After I grabbed the rod, the fish took off on a long run, pulling lots of line off the Shimano Reel with a series of head shakes. “This feels like a salmon,” I told Smith.

As the fish keep running, it suddenly made a leap. “It looked like a salmon or big holdover rainbow,” I told him.

I carefully and slowly worked the fish toward the boat. As usual with a big salmon, the fish made a last run as I got it near the boat. However, it was tiring and I slowly reeled the fish to the surface and Smith netted it. It was a big, fat silvery king measuring 24-3/4 inches long and weighing 5 pounds, 2 ounces.

We were stoked. “That’s the second biggest landlocked salmon I’ve ever caught,” I told Smith. “It’s funny that the biggest salmon I caught, a 9 pounder, hit on a slow fishing day just like this one.”

Over the next hour, we landed two more fish. Taylor, Smith’s daughter, brought in a feisty 13 inch rainbow, caught on the same lure on the same rod that I had hooked the king on. After Smith netted the trout, it spat out six threadfin shad, the major forage fish at the lake.

I was reeling in that same rod that hooked both fish when I realized something didn’t feel right. “I think I may have a fish on this rod,” I told him.

Sure enough, it turned out to be a beautiful, fat 18-inch holdover rainbow that put up a great fight, one of the quality holdovers that dominate the fishery at Don Pedro.

The rainbows were holding right at the thermocline and above, from 25 to 45 feet deep. “The rainbows generally stay in warmer water than the king and kokanee and they will come up to feed on shad,” he explained.

Usually, the salmon are caught at 75 to 80 feet deep, where the shad go, and down to 150 feet deep, but the king we landed that day was much shallower, at 40 feet, because that’s where the bait was.

The biggest salmon Smith has taken from Don Pedro weighed 7 pounds and the lake record is around 11-1/2 pounds.

“Anglers caught a good number of salmon in the 4 to 5 pound range, along with some larger fish to 10 pounds, 7 to 8 years ago, but the fish have been smaller since then,” he noted.

A unique self-sustaining king salmon population thrives in Don Pedro. CDFW biologists originally thought that the fish couldn’t reproduce naturally in the lake, but the fish did indeed spawn in the Tuolumne River during the mid-nineties after rainbow trout and king salmon plants were discontinued by Moccasin Creek Fish Hatchery to combat a copepod infestation.

That makes Don Pedro the first lake west of the Great Lakes where a self-sustaining population of spawning king salmon has been documented.

The Tuolumne River features good water and habitat conditions for natural salmon spawning. Don Pedro is one of two California lakes– the other is Folsom – where successful landlocked Chinook spawning has been documented.

“Don Pedro is my favorite lake, since we regularly catch kokanee, kings and rainbows on our trips to the lake, along with an occasional black bass and brown trout,” said Smith.

With the lake getting up to 80 percent of capacity this year, Smith is expecting fishing for holdover rainbows to break loose this fall. “We should see really nice fish in the 2 to 3 pound range this autumn,” said Smith.

The kokanee fishing has been spotty this year to date, while the king salmon fishing was good earlier in the year.

The late Phil Johnson, the founder of Kokanee Power, discovered the existence of a healthy, self-reproducing population of kokanee in 1992. That year Johnson landed seven kokanee over 4 pounds, although fish that size haven’t been reported on the lake since. The fish were the progeny of a plant by the Department of Fish and Wildlife in 1981.

Kings and rainbow trout are taken year round at the reservoir. Kokanee salmon at Lake Don Pedro are more seasonal than the other fish, providing the top action from April through early August.

Don Pedro is a very popular lake for bass fishing. The CDFW stocked Florida-strain largemouth in Don Pedro in 1980. The bass grow big and healthy, due to the abundance of forage including threadfin shad and kokanee and king salmon. Rod Martin landed the lake largemouth bass record of 18 pounds, 9 ounces on April 9, 2003.

Other fish found in Don Pedro include crappie, bluegill and channel catfish.

The present shoreline of Don Pedro was created in 1971 when New Don Pedro Dam was completed. Prior to then, a concrete dam built in 1923 backed the Tuolumne River some 1.5 miles upstream from the new dam’s location, creating a much smaller lake than the present one.

Location and size: the City of San Francisco, the Turlock Irrigation District and the Modesto Irrigation District built New Don Pedro Dam, an earth and rock fill dam. The lake, filled in 1971, rises 585 feet above the old streambed of the Tuolumne River, creating a maximum lake level/elevation of 830 feet above sea level. Don Pedro has 13,000 surface acres of water and when full.

Management: The Lake Don Pedro Recreation Agency manages the recreational facilities and collects a $10.00 per vehicle per day Park Entrance Fee. The fee for each boat and each personal watercraft is $8.00 per day.

Camping: There are a total of 550 campsites among the three recration areas, Blue Oaks and Fleming Meadows on the West Shore and Moccasin Point ton the West Shore. The Blue Oaks Campground is located on the west shore, near Lake Don Pedro Marina. There are 87 trailer pads with a dump station and 172 campsites (50 are walk-in)

The RV Campsites are located in the Fleming Meadows and Moccasin Point Campgrounds. Facilities include water; sewer and electricity hookups, a paved parking pad, table, and barbeque grill at each site, plus access to hot showers in developed restrooms. For camping information, rates and reservations, please visit: www.donpedrolake.com. Lake Don Pedro Recreation Agency: 209-852-2396 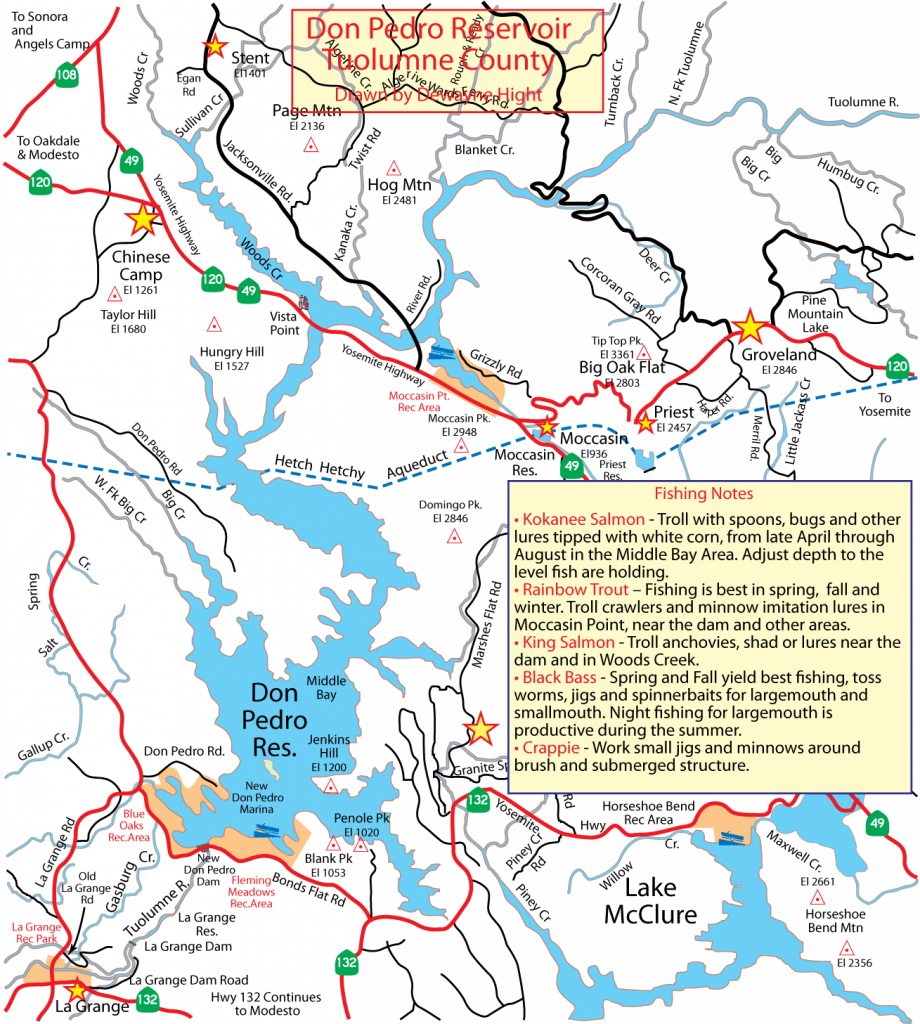