The fat, silvery fish slammed the lure, knocking the line off the downrigger clip, and immediately jumped out of the water in a series of leaps in an effort to free itself of the hook. I grabbed the rod out of the holder and reeled in the slack.

The fish kept jumping out of the water until it made a run and surged towards the bottom for a couple of minutes. Finally, I was able to work the fish towards the net where Captain James Netzel, owner of Tight Lines Guide Service, netted it.

The kokanee salmon was 16 inches long and very fat and healthy, a typical Boca Reservoir kokanee.  It was the last fish needed to fill our limits by 8:30 AM.

In spite of the great bite we had experienced, Netzel noted that the anglers fishing with him had caught limits of kokanee even earlier, by 7 am, on a trip the previous week.

“The fishing has slowed down since them,” he noted. “We have to work a little harder to get our limits.”

I’ve caught bigger kokanee, and limited out more quickly at other lakes, but in terms of the sheer fighting quality and spunkiness of these fish, this quick trip to Boca was the some of the best kokanee fishing I’ve ever experienced.

We caught our fish while dowrnigger trolling with Radical Glow Tubes and Wee Dick Nites, tipped with white corn, at an array of depths from 20 to 35 feet deep. We saw three other boats fishing the lake before the personal watercraft and water skiing enthusiasts arrived.

Boca is located on the Little Truckee River 27 miles southwest of Reno and 4 miles northeast of Truckee. The lake has a surface area of 980 acres and holds 34,735 acre-feet of water when full. Boca Dam and the Reservoir are features of the Truckee Storage Project, built by the U.S. Bureau of Reclamation in 1930.

Because of its reputation as the virtual capital of water skiing and recreational boating in the Truckee region, Boca Reservoir usually receives relatively little fishing pressure during the summer compared to the more popular Stampede and Prosser reservoirs. However, this year, more anglers are making the trek to Boca for the outstanding kokanee fishing that is available.

The key is to get on the lake early during the summer before the personal watercraft and water skiers turn the lake into a noisy froth. When you hit it right, Boca can yield excellent kokanee fishing, as we found out.

“The fishing has been really good this year,” said Netzel.  “Everybody had told me that the kokanee were small at the lake, but I heard this spring that anglers were getting big fish. A friend showed me the lake and we caught bigger fish that day than we were catching at Stampede.”

On the next day, Netzel went out with two clients and caught their limits of 15 fish. “We lost about half the fish we hooked, as is normal for kokanee fishing. The fish averaged 15 inches and went up to 17 inches,” he noted.

He said the fish have showing at a variety of depths and spots on the reservoir.

“People ask me what depth I’m fishing, but it varies. When I get out on the lake, I turn on the Fish Finder and see where the kokanee are holding,” said Netzel. “I usually start out at 20 to 25 feet deep. I have four downriggers and stagger them at 5 feet apart.”

He said the key is to move around until he finds a school of fish. “I’ve caught the fish all over the lake. I go where there are not a lot of other people fishing. I try to find my own school,” he tipped

Netzel has been doing best on Radical Glow Tubes, MicroHoochies and Apex lures to entice the kokes.

“The biggest problem is people see five boats working a school and they join them. But five boats on one school turn the fish off. I generally will fish a spot and then when people begin congregating near me, I’ll find another school,” he stated.

He noted that the kokanee this year at Boca are very fat and healthy. ”A 15 incher at Boca is an inch thicker than one caught at Stampede,” he noted.

Boca, like Stampede, is planted with kokanee fingerlings every year by the California Department of Fish and Wildlife. Kokanee plants vary by the year.

Kokanee are the main fish that anglers pursue, but anglers also catch mackinaw, rainbows, browns and Lahontan cutthroats in the lake’s fertile waters in the spring, summer and fall.

Jay Rowan, Acting Senior Environmental Scientist Supervisor-Hatcheries North Central Region-CDFW, said the Department is now evaluating the fisheries at Stampede, Boca and Prosser, where the Lahontan cutthroat trout (LCT), the trout native to the Truckee River watershed, have been reintroduced in recent years.

The CDFW historically stocked Boca with around 12,000 pounds of catchable rainbows. However, because of the drought-spurred problems at the state trout hatcheries last year, Rowan said the Department has swapped the cutthroats for the rainbows this year.

“We planted 2800 subcatchable LCT this season,” he said. “Normally, these fish are about 10 fish to the pound, but they’re a little bigger this year. This is a put and grow fishery.”

In 2010, the Department conducted angler surveys at Boca. One of the questions was “Would you be in favor a switch from rainbows to Lahuntan cutthroat plants?” Surprisingly, 85 percent of anglers responded, “Yes.”

Besides trout and salmon species, the lake hosts Lahontan redsides, tuib chubs and speckled dace, fish that provide forage for the larger gamefish.

Boca is lightly fished by bank anglers. The best fishing is in the early spring after the lake ices out or in the fall.  Rainbows are the predominant fish landed by shore anglers, but mackinaws and Lahontan cutthroats also spice up the catches.

For maximum success on trout, anglers should toss out Power Bait, nightcrawlers, Kastmasters, Rooster Tails and Rapalas throughout the lake. Among the better spots to try are the dam, boat ramp and river inlet.

One advantage of Boca over Stampede is that the boat ramp and facilities are more accessible to people with disabilities than Stampede’s ramp facility, which is difficult to launch and park at when the water level is low. At the same time, the parking lot fills up rapidly with trucks and trailers during the busy summer months, so you have to get on the lake early.

Location and History: Boca is located on the Little Truckee River 27 miles southwest of Reno and 7 miles northeast of Truckee. The lake has a surface area of 980 acres and holds 34,735 acre-feet of water when full. Boca Dam and the Reservoir are features of the Truckee Storage Project, built by the U.S. Bureau of Reclamation in 1930.

Camping: available on both the east and west shores of Boca Reservoir. Most single family sites and group campgrounds can be reserved at www.recreation.govor (877) 444-6777. No camping or campfired are allowed outside of the developed campgrounds.

Boating: A boat ramp is located near Boca Campground on the southwest end of the reservoir, but may be subject to closure during low water levels.

Boca is a popular spot for water recreation of all kinds. There is Heavy motorized boat and personal watercraft use, and water skiing on summer weekends. The reservoir is also popular for wind surfing on the east shore. Kayaking and canoeing when the water is calm (morning and evening).

Directions: From Truckee take Interstate 80 east for six miles to the Hirschdale exit. Go north and under I-80 for approximately one mile to Boca Reservoir. 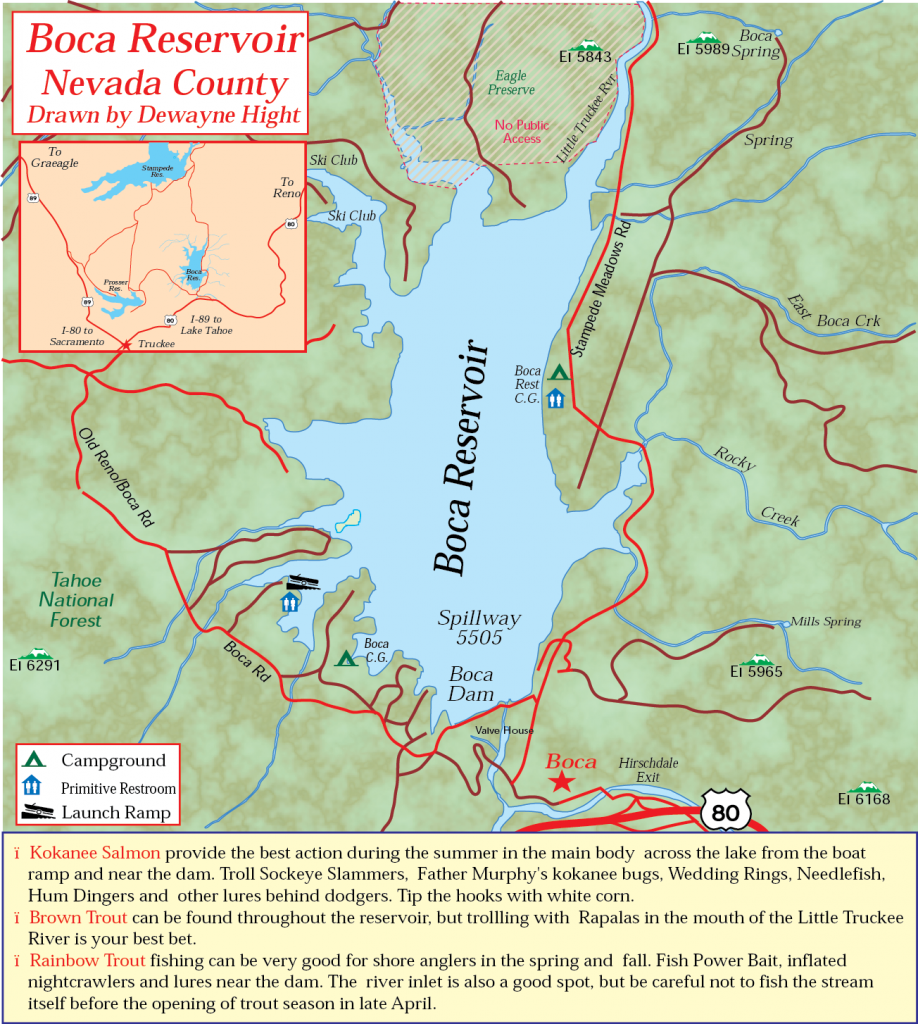