Spicer Reservoir, located on the North Fork of the Stanislaus River, is unique among Central Sierra Nevada reservoirs in that it offers anglers a chance to square-tailed rainbows grown out from fingerlings or naturally spawned in the main tributary of the lake, Hobart Creek.

The rainbow trout fishery is now in excellent shape after recovering from a tapeworm infestation that plagued the lake’s fish in the late 1990s.

When the lake first filled in 1990, the influx of nutrients into the reservoir created a relatively rich food chain that allowed rainbows to grow to large size, including some fish in the 3 to 5 pound class.  However, the lake’s nutrients have declined over recent years, accounting for smaller, though still healthy fish.

The Department of Fish and Wildlife stocks the reservoir with 50,000 rainbow trout fingerlings, a mixture of Eagle lake-strain rainbows and Kamloops trout, every year.

Every spring, huge numbers of rainbows go up into Hobart Creek, located near the boat ramp, to spawn. To protect the naturally spawning population, fishing in the creek is closed every year until July 1.

Wild brook trout, brown trout and brown bullhead catfish are available also, but 99 percent of the fish caught at the lake are rainbows, according to Bill Reynolds at Ebbetts Pass Sporting Goods.

Located at an elevation of 6,620 feet in the Stanislaus National Forest, Spicer straddles the border between Tuolumne County and Alpine County.

The reservoir is situated on Highland Creek, a tributary of the North Fork of the Stanislaus River. The recreation area is 8 miles southwest of Highway 4 on Spicer Reservoir Road and is about a 45-minute drive from Arnold.

The reservoir has 2,000 surface acres and contains 189,000 acre-feet of water when full. The boat ramp was in the water and the water level was rising on my latest trip to the reservoir.

When I first fished the lake in the early of 2002, the lake was just beginning to recover from the trout population’s battle with a tapeworm parasite. I caught an easy limit of rainbows while bait fishing from shore one evening.

On the following day, James Pagani of Sparklefish Lures and I landed limits of fish while trolling the following day. Although the fish were square-tailed and very pretty, they were only in the 10 to 12 inch range.

Since then, I have fished Spicer several times, catching limits on two trips while soaking Power Bait from shore near the boat ramp. Most of the fish have been larger than on my first trip, ranging from 12 to 16 inches long.

On my latest trip, the lake was very tough to fish, due to strong winds that kicked all but a stubborn few off the water. One angler reported hooking several fish on nightcrawlers, but released them all. “On my last trip, we caught bigger trout up to 18 inches long,” he said

I have found the best fishing on this lake during the spring right after the lake becomes accessible and then again in the fall just before the snow arrives. While I have caught fish here in the morning, I find the best time to hit the lake is in the late afternoon just before dark.

In the summer, the lake is a great bet for trollers fishing deep with downriggers and lead core line. Trollers should find the locations of the trout on their fish finders and adjust the depths accordingly, but 30 to 50 feet deep is generally a good depth range to target the rainbows during the summer.

“The weather has been very warm and the fish have moved deeper,” advised Bill Reynolds of Ebbetts Pass Sporting Goods at press time. “You should be at the lake early for better success.

My best-ever trip to the lake was a late November afternoon trip a couple of years ago. Only one shore angler was fishing in the Hobart Creek inlet near the ramp, but he hadn’t caught any trout while throwing a minnow imitation plug.

By the time I returned to the launch ramp area, three anglers in an aluminum boat were motoring in carefully towards the shore.

“We caught fish after fish while trolling,” said one of two older men in the boat, accompanied by a young boy. “There’s lots of fish in this inlet; you should have no problem catching trout here.”

As they were putting the boat on their trailer, Debra Elgin of Murphys came down to the water and set up her spinning rod. Within five minutes of putting her nightcrawler in the water, she hooked up a bright, square-tailed rainbow trout around 13 inches.

I had just thrown out Power Bait on a sliding sinker with my spinning rod.  I asked her if I could get a photo of her with her fish and she obliged. Just as I started to take a photo, she said, “You just got a bite on your rod.”

I looked at the rod and the fish had stopped biting. After taking a couple more photos of Elgin, I picked up the rod, set the hook and it felt like a fish was on. However, the fish came off as I reeled it in.

About 15 minutes later Elgin got a bite, set the hook and began reeling in another trout that was about 1 inch longer than her first. The sun was beginning to go over the mountains and the chill of the oncoming night replaced the warmth of the sunny afternoon.

I again asked her if I could take a photo with her trout. She got both fish off the stringer, cleaned off the sand and I got ready to take her photo. However, I saw out of the corner of my eye that my left rod was nearly bent in half as a fish took my nightcrawler!

I put the camera down, picked up the rod and began reeling the ‘bow in. The fish never jumped, but thrashed about a couple of times on the surface.

I unhooked the 16-inch beauty and put it on my stringer, About 10 minutes later, I hooked another trout about 11 inches long in the day’s waning light.

I rebaited both rods and fish quickly hammered both baits. I reeled in the line on the rod on the left first, pulling in my largest fish of the day, a 16-1/2 incher. I then reeled in the other rod and brought the fish in, a smaller rainbow.

The twilight hour was definitely the magic time to catch fish this day. It is definitely because of wonderful trips like that one and the others I’ve made to Spicer that I love going back to this mountain trout hot spot every year! 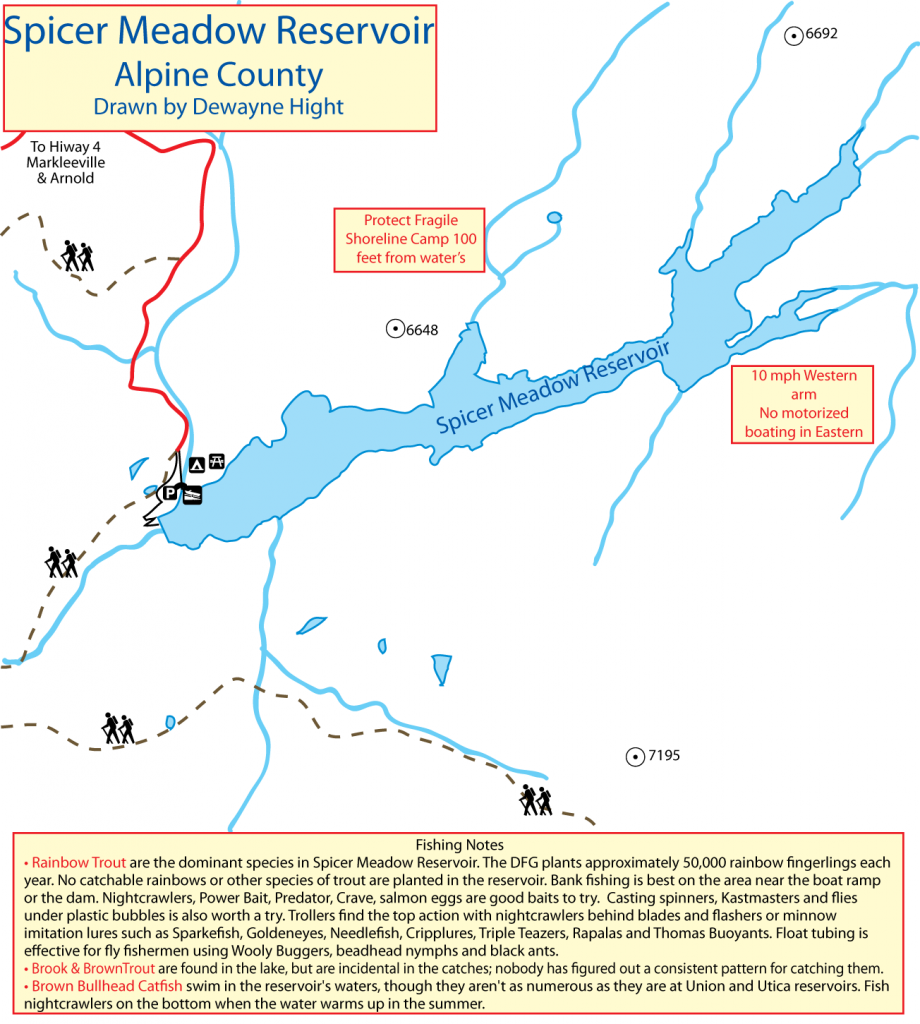 Size and Location: The 189,000 acre foot reservoir is formed by New Spicer Meadow Dam on Highland Creek, a tributary of the North Fork of the Stanislaus River, at 6620 feet in elevation. It has a surface area of 2,000 acres when full. The reservoir is situated eight miles southwest of Highway 4 on Spicer Reservoir Road in the Stanislaus National Forest.

History: The reservoir is a relatively new one, since the 262 foot tall rock-fill dam was completed on Highland Creek in 1989 and filled in 1990. Additional water is diverted from the North Fork of the Stanislaus River by the North Fork Diversion Dam and a two-mile tunnel. Calaveras County Water District (CCWA) owns the dam. Water from the reservoir supplies drinking water and water for irrigation in Calaveras County. The water district, along with the Northern California Power Agency (NCPA) sells electricity from the 6-MW hydroelectric plant at the base of the dam.

Boating Facilities and Regulations: A boat ramp with turnaround area and movable dock is available when the lake is full. No overnight mooring is permitted. Maximum speed on the western portion of the lake is 10 mph; the eastern portion, surrounded by the Carson-Iceberg Wilderness, is managed for non-motorized uses only.

Camping: A Wilderness Permit (available at the District Office free of charge) is required for shoreline camping in the eastern (non-motorized) portion of the lake.

Spicer Reservoir Campground: located at 6,200 feet on a timbered setting on the shore of Spicer Reservoir. There are 43 total campsites. The maximum vehicle length is 50’, the maximum length of stay is 14 days and the maximum use is six persons per single unit site, with several multiple units for small groups. Piped water, restrooms, vault toilets, tables, picnic table, stoves, BBQ grills are available. Reservations are first-come, first-served. The campground is open from June to October, weather permitting.