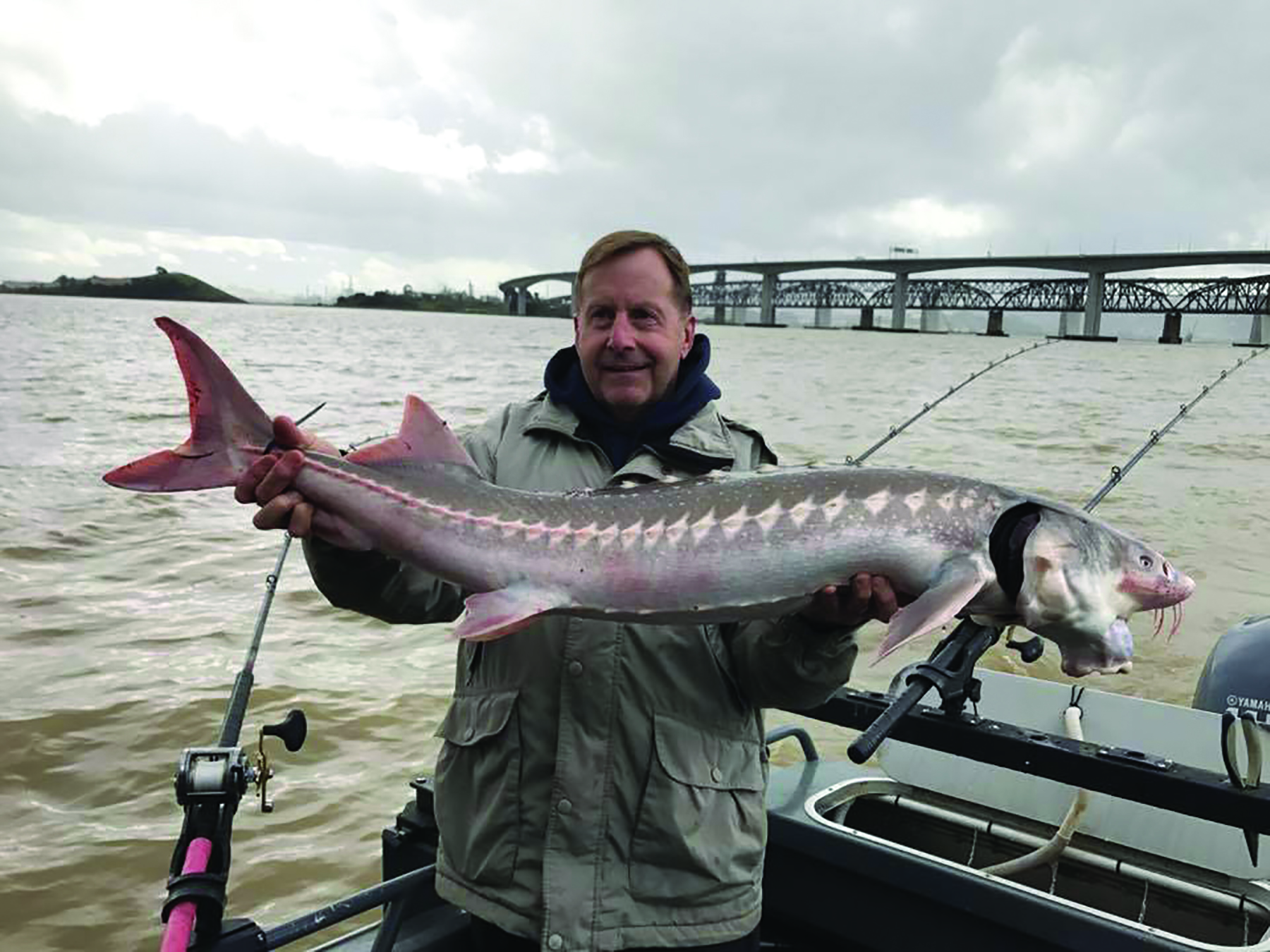 (East Bay) “I’d been doing really well on sturgeon down in the south end of the South Bay, but that action has really slowed down for me,” disclosed Chad Reese of Castro Valley.

“In the month of January we brought and released 11 keeper and oversize sturgeon to my boat, but since then we’ve only been hooking a fish once every second or third trip. Herring is the top bait for sure, but we’ve gotten some action on ghost shrimp and night crawlers too. I’m hoping that the bite will turn back on with warming conditions, but since I haven’t been marking as many fish as I had been I’m starting to wonder if they have moved back up toward the Delta. Only time will tell,” said Reese.

Most charter boats in Berkeley and Emeryville are idle at this time as they await the kick off of spring potluck fishing.

“The California Dawn is at the shipyard right now. We are getting her ready for the season,” related Captain James Smith. “I’m hoping to be back on the water by March 25. I’m skipping sturgeon fishing this year. I’m going to open the season halibut and striper fishing inside the bay.

“After that I’ll let the fish dictate where we are fishing and what we are targeting. I think we are in for a pretty good year with all the freshwater outflow we’ve seen. In the past big winter rains have been followed by solid bay halibut fishing so I’m hoping that pattern holds true this yea,” he forecasted.

(Bodega Bay) Boat maintenance for the upcoming ocean salmon and rockfish seasons have been occupying the time of Bodega Bay party boat owners, but there are sanddab and Dungeness crab to be found in the ocean when the combination of the right weather and sufficient interest occurs. From the beaches, red tail surfperch provide the best action with Berkley Camo or Sand Worms along with live bait.

Captain Rick Powers of Bodega Bay Sport Fishing said, “We are getting out on occasion for crab-only or crab/sand dab combinations, but most of the time we are working on getting our boats ready for the upcoming seasons. It looks really good out there in 50 fathoms with lots of feed, and hopefully, we will get the opportunity to work this feed for salmon in April.”

California fishermen are anticipating reduced fishing for Chinook salmon due to the poor forecast for the Klamath fall run and continued concerns over the winter run, as discussed druing the March 1st DFW Ocean Salmon Information meeting in Santa Rosa. The season dates and regulations will be developed by the Pacific Fishery Management Council and California Fish and Game Commission over the next two months.

One season for certain will be the rockfish opener on April 15th, and an extra 10 fathoms will be added to allow fishermen a depth limit of 240 feet. Other regulation changes will be a limit of 3 black rockfish, 3 cabezon, and 1 canary rockfish as part of your 10-fish limit.

Further south in Tomales Bay, there is an advisory not to eat recreationally harvested mussels, clams or whole scallops due to dangerous levels of paralytic shellfish poisoning (PSP) toxins.

(El Granada) The Queen of Hearts out of Half Moon Bay Sport Fishing, the New Captain Pete, and the Huli Cat are getting ready for the rockfish open below the Pigeon Point starting on April 1.

They will run the 18 miles to Pigeon Point for the opening two weeks of April, given enough passengers to make the trip worthwhile.

Depth regulations have been increased to 300 feet waters below Pigeon Point and to 340 feet above Pigeon Point. One canary rockfish will be included in a 10-fish limit, and the ling cod limit has been lowered to two lings, both changes for the upcoming season.

‘If we could only get the wind to ly down for a few days we could get out for sanddab/crab combinations, but this hasn’t been the case for the past few weeks. It is just spectacular in Half Moon Bay today but there hasn’t been much interest with the weather being consistently rough before this point,” said Captain Tom Mattusch of the Huli Cat.

Mattusch’s boat is the only large party boat running the combination trips, and they will also operate crab-only, or whale watching trips until the April 1st rockfish opener below Pigeon Point.

Their last trip out was on February 4th, but there are better times on the horizon with the arrival of rockfish season in local waters on April 15th.

The Titans of Mavericks Big Wave Surf Contest, a staple of the Half Moon Bay community, will not occur this spring, leaving party boats to wait for rockfish season in order to create enough interest to start their motors. 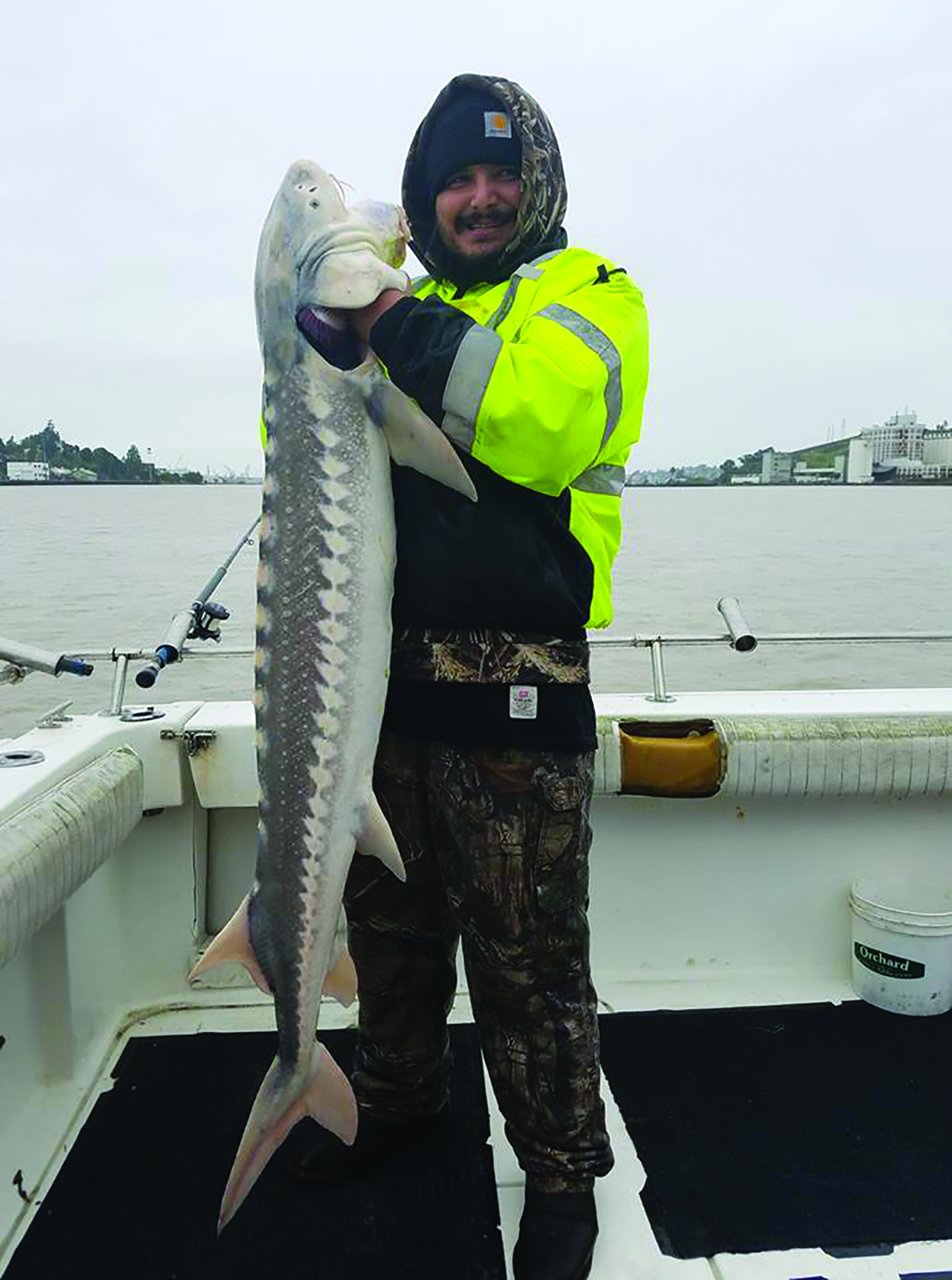 (Martinez) “We had been doing pretty well on sturgeon in both San Pablo and Suisun Bay until the water temperature dipped 4 degrees and that put an end to the party,” quipped Captain Chris Smith of Captain Hook Sportfishing.

“I think it’s going to get back on track at any moment. I’ve got a trip in the morning so I’m hoping tomorrow is the day. There are plenty of fish around and right now the weather is clear, warm and beautiful. I was down at the dock doing a little work on the boat yesterday and I actually had my shirt off for a while. I’m thinking that with the warm sunny weather the water temperature is rising and that means the bite should turn back on. There are plenty of fish around, we just need them to feed,” added Smith.

Shrimp baits have been the best baits over the past few weeks. Ghost shrimp are the most available shrimp baits at this time. If you get a chance to purchase some mud shrimp jump on them, especially if you are going to be fishing in San Pablo Bay. Lamprey eel is another must have bait.

In Suisun Bay and the lower reaches of the Delta, fish have been caught on roe, shrimp and nightcrawlers over the past week.

(Moss Landing)  Fishing trips have been few and far in the Monterey Bay area since the beginning of the year, due to rockfish closure, followed by the big storms that have hit the coast. Charter boat anglers have been limited to sanddab/crab fishing combos or whale watching trips, while surf fishermen are picking up some barred and other perch along the state beaches.

However, things will all change when the rockfish and lingcod season for boat-based anglers will begin on April 1, 2017 south of Pigeon Point.

Carol Jones of Kahuna Sportfishing said she is now booking anglers for fishing trips during the upcoming rockfish and salmon seasons.

“We have a brand new seasoned crew for the 2017 season,” she said. “We will not know about our salmon season until later this March. We will be taking reservations only for anglers committed to either rockfish or salmon at this time.”

Boats out of Fisherman’s Wharf in Monterey continue to venture out on sanddab/crab combo trips on the fishable days between storms. The latest trips on the Chubasco checked in with 40 to 50 sanddabs per rod, along with and 2 to 3 crabs per angler, said Chrissie Chonacki of Chris’ Fishing Trips.

“The weather is finally improving and there is a little more room to get out of the harbor,” said Todd Fraser of Bayside Marine in Santa Cruz. “The tides are playing a role, so make sure you check the soundings on the harbor web site. The crab fishing has become better!

(San Francisco) Mild, sunny weather returned to the Peninsula, enticing anglers to wet a line along the shoreline.

Perch fishing was the top recommendation by Stefanie Scott at Gus’ Discount Bait and Tackle this week, with fish being caught both on the beach and on city piers.

“They’re catching a few striped and shiner perch over at Van Ness right now using shrimp and squid. With the current being really strong during outgoing tide they’re mainly catching fish during the incoming tide,” she tipped.

“At Ocean Beach you can go and use the same baits or you can try using motor oil grubs behind a weight and cast it out far,” she added.

Crabbing interest waned, but Scott recommended fishing from Baker Beach using squid or anchovies in between high and low tide.