The hearing will be held at the Jean Harvie Community Center, 14273 River Road, Walnut Grove, from 10 am. to noon. Members of the public are invited to attend, according to a press release from Dodd’s Office.

“Ensuring a vibrant and sustainable Delta is absolutely essential for our region and our entire state,” said Senator Dodd. “I encourage Delta residents to join us and hear from the State Auditor’s Office regarding their recent findings. The Delta Caucus is working to educate the public and fighting to protect the Delta for our residents, visitors and wildlife.”

State Auditor Elaine M. Howle will present the findings of the recent audit: “Department of Water Resources: The Unexpected Complexity of the California WaterFix Project Has Resulted in Significant Cost Increases and Delays.”

The audit revealed extensive mismanagement by the Department of Water Resources (DWR), including the violation of state contracting laws, spending millions of dollars over anticipated costs, and failure to complete either an economic or financial analysis.

“WaterFix is one of the largest, most costly public works project ever proposed in California,” said Frazier, who represents the heart of the Delta region in the Assembly. “There are a number of growing concerns surrounding the project’s financials. The recent state audit cited cost over-runs that are out of control. The audit also found the Department of Water Resources failed to complete a basic cost-benefit analysis and has mismanaged the project.”

Dr. Jeffrey Michael, executive director of the Center for Business & Policy Research at the University of the Pacific, will present the Center’s recent report, “Benefit-Cost Analysis of the proposed California WaterFix.”

Cindy Messer, the Chief Deputy Director of the Department of Water Resources, will report on the finances for the California WaterFix project, including cost-share estimates and debt service projections, and the response to the recent audit.

Members of the public will have an opportunity to provide their comments, limited to 2 minutes per speaker.

Delta Tunnels opponents, including Restore the Delta and North Delta Cares, are encouraging the public to attend and provide public comment.

“Our Delta legislators are hosting a public examination and hearing on the blistering state audit report on the tunnels. We hope to see you there!” said Barbara Barrigan-Parrilla, Executive Director of Restore the Delta (RTD).

The Delta Caucus is a bipartisan mix of 12 members of the Assembly and Senate who represent the Delta region. The Caucus is co-chaired by Assemblymember Frazier and Sen. Dodd. 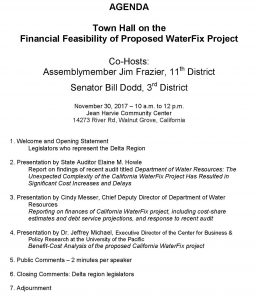