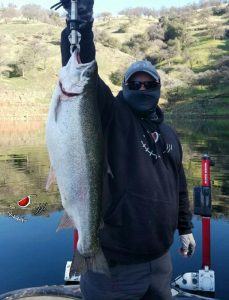 ANGELS CAMP – Chris Peterson of Folsom, the co-producer of the BABC tournaments, was fishing on the main body of New Melones Reservoir on January 25 when he caught and released a new lake record rainbow trout weighing 14 pounds, 4 ounces.

The trout measured 27″ in length and 21″ in girth., according to Gene Hildebrand of Glory Hole Sports.

“Here we are at the end of January with a record rainbow trout that has blasted the Melones Lake record by 4 lbs. 6 oz.,” said Hildebrand. “I’ve heard many an angler commenting that Melones holds some huge ‘bows – and this one proves all that chatter.”

“At 9:00 am while bass fishing with one of our veteran who had just brought in a 4+ lb bass Chris saw some shad on the surface of the cove that they were in,” said Hildebrand. “They motored over and came up with a plan to bring his presentation from the shore in towards the shad.”

“Dragging the bladed chartreuse Voo Doo into the water, line began peeling off his reel. After setting his hook, Chris was thinking I’ve got a really nice bass on the end of my line, turning his pole into a circle hook,” he said.

“As he brought her in closer and seeing color he realized a nice size trout was on his line. After landing her, Chris thought he may have a record, but wasn’t sure, so he had his partner look up the records for the lake and told him 9 lb. 10oz. is the current record. So he says, ‘Hey Chris, you just landed a new lake record!’” Hildebrand said.

Hildebrand emphasized, “Anglers FYI; for anyone with a potential lake record, please call us at the store and hopefully we can send someone to weigh, photograph and measure the catch at the lake. Glory Hole Sports (GHS) is the unofficial recorder of lake records for New Melones, and we understand there is sometimes conflicting interest in the welfare of the catch, whether or not to release the potential record, sacrificing your place as a record holder for the lake.”

“We do promote catch and release and highly commend Chris Peterson for releasing the new record for rainbow trout,” he said. “Chris in our opinion had done everything he could to record the statistics of the trout, length, girth, weight and photographed at the lake before releasing her. If indeed we can verify the information that is provided, such as a witness, comparing the scale used with ours, a photograph with the fish hanging from the scale and can see the scale weight, etc., then we can accept this as proof. If your catch has expired, then indeed bring it in to GHS so we can record it here, and you can have it mounted,” he concluded.

That’s not the only lake record set at New Melones this year. “Officially or not officially, Glory Hole Sports has no recorded lake record for crappie, so to bring in the new year, we are hereby crediting Roger Stewart with owning the newly classified crappie record for New Melones,” he continued.

Roger of River Pines caught this 2 lb.6 oz. crappie on January 1, 2018. He reported catching the sunfish on a Rapala in a Rainbow Trout pattern.

“We like to promote catch and release on New Melones. If you do so, provide us a picture and bring it in for a copy or email it to us at gloryholesports@yahoo.com so we can put it on the board or in the newsletter,” added Hildebrand.

New Melones Lake level is currently at 1050.75 and 37.25 ft. from full. The water level had dropped to the year low of 1050.00 before rising to current level. Water temperature is 56 degrees and the clarity is good.