The NorCal Trout Anglers Challenge (NTAC) tour kicked off the 2018 season on February 3 with superb fishing and unseasonably warm, sunny weather at San Pablo Reservoir, nestled in the green, rolling hills of El Sobrante in the East Bay.

It was quite a contrast with last year, when anglers braved cold, wet and windy conditions at the lake. Many anglers reported catching their limits of trout while using an array of offerings.

The event, presented by Gone Fishin’ Marine and sponsored by Angler’s Press and the Fish Sniffer magazine, drew 242 total participants. A total of 113 adults and 28 kids brought fish to the weigh in table.

“We are overwhelmed and very thankful for the support we have received from both our sponsoring partners and participants, and it is clear that this series is helping to bring individuals, families and youth together – in one place, to enjoy a great weekend of outdoor fun,” noted Vince Harris, president of Angler’s Press Outdoors, the promoting organization that created the NorCal Trout Angler’s Challenge Series, and has been its host for the past 5 years. “We are looking forward to another fantastic year.”

The fishing success anglers reported was a combination of prime water conditions and heavy rainbow trout plants. The lake is full and the water clarity is” awesome “at San Pablo, according to Marcella Shoemaker of the Rocky Mountain Recreation Company.

“We planted 8,000 pounds of rainbow trout in the lake for the February 2 opener and the February 3 NTAC tournament,” said Shoemaker.

Rain Bipat of Fairfield won first place in the adult division of the event by catching a 5.61 lb. rainbow while tossing out PowerBait.

“We rented a boat, drove to a spot and then fished bait,” he said. “My wife, Sunita, and I both landed our limits.”

Bipat, a newcomer to the NTAC, took home a beautiful first place trophy – as well as a nice cash prize to commemorate his efforts.

Ted Jocson, from Super Duper Outdoors on youtube.com, finished in second place with a rainbow weighing 5.05 pounds. He landed the huge fish while fishing a spinnerbait from his kayak.

Jerry Barksdale, a previous first place winner in the event, finished in third place with a beautiful 3.33 lb. rainbow.

“I caught that fish on a Mouse Tail,” said Barksdale. “The fishing was very good – I limited out.”

Adrink Chernak won first place in the youth division of the tournament with a 2.14 lb. rainbow, while Lana Manaout placed second with a 2.5 lb. rainbow.

Brett Chernak, weighed in a fish that only went .31 pounds. But he was not distraught, as his fish – small though it was, garnered him the events “smallest trout award” – presented by the event’s sponsoring partners – that consisted of a premium Daiwa rod/reel combo, Gamakatsu hooks, P-Line monofilament, and Rooster Tail brand lures, explained Vince Harris.

Craig Smith of Olivehurst won a Yakima Rooster Tail tackle pack and $100 in cash for catching his fish on a Rooster Tail spinner.

The NTAC series heads next to EBMUD’s Lake Pardee, located in the Mother Lode near Ione, on March 3. 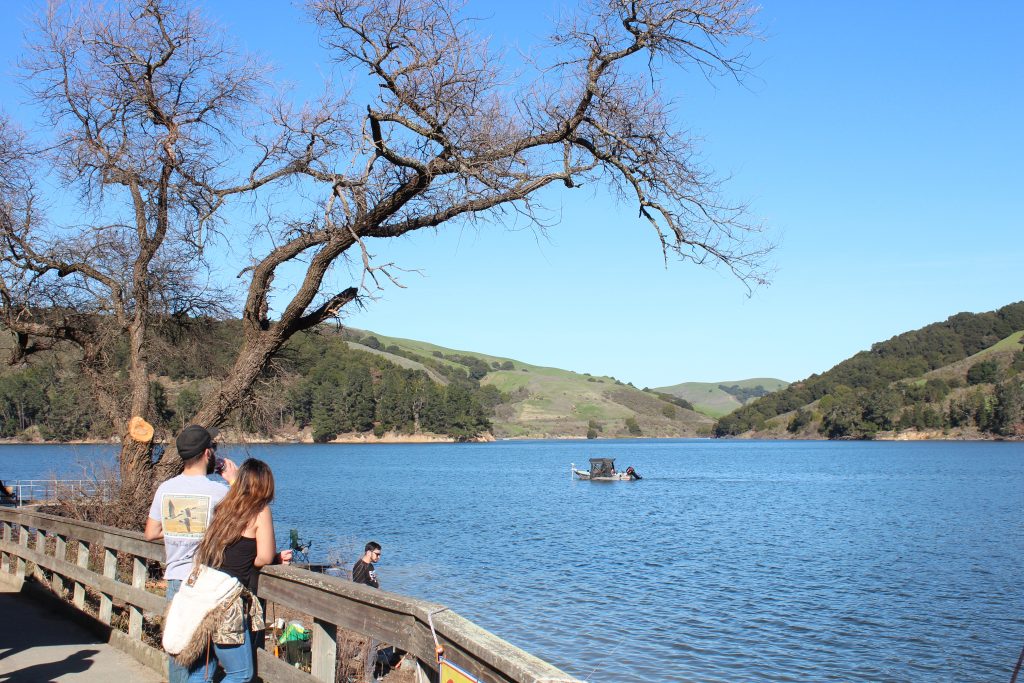 San Pablo Reservoir is stocked regularly with rainbow trout in the fall, winter and spring and channel catfish during the summer. Largemouth and spotted bass, crappie, redear sunfish, bluegill and even a sleeper population of white sturgeon are available also.

The lake is best known for the trophy trout it has produced over the years. Stephen D. caught the lake record rainbow trout of 21 pounds, 12.8 ounces on April 18, 2001 while soaking chartreuse Power Bait off Oak Point.

While trout are the most popular species at San Pablo Reservoir, the lake also has good populations of channel catfish, spotted bass, largemouth bass and sunfish.

That fish eclipsed the previous lake record set by Dave Edwards of Vallejo on March 23, 1995 when he nailed a 31 lb. 4.8 oz. channel catfish while using an anchovy off Oak Point

In recent years, the hard-fighting spotted bass has become more common in the catches at San Pablo, making the reservoir the only one in the Bay Area with a population of “spots.” The spotted bass lake record is 5 pounds, 9.36 ounces.

The reservoir’s big Florida-strain largemouths also make it a popular target of a hard-core group of big bass devotees. Anglers fish an array of methods, such as tossing spinnerbaits, split shotting with plastic worms, drop shotting with plastics and tossing out rainbow trout pattern swimbaits.

However, it was a trout angler, Victor Barfield, who caught the lake record 18 lb. 11.2 oz., largemouth on March 22, 2001 while fishing a nightcrawler and Power Bait in Scow Canyon.

Crappie, redear sunfish, and bluegill offer good fishing in the spring and summer for anglers using an array of small baits and lures. The redear sunfish record is 3 pounds, 6.4 ounces, while the lake crappie record stands at 3 pounds, 3.2 ounces

The lake also hosts a sleeper population of white sturgeon that are occasionally caught by anglers bait fishing for trout and catfish.

San Pablo features 866 surface acres and 14 miles of shoreline that offers anglers their choice of fishing from boats, both private and rentals, or from shore.  Since San Pablo is a drinking water reservoir, swimming, wading, and other body-contact activities are prohibited.

For more information on the NorCal Trout Anglers Challenge, contact: www.anglerspress.com or call 916-768-0938.

Hours: Open this year from February 4 through November 19. The main recreation building and marina open from sunrise to one half-hour before sunset.