Days on the water with Ned Kehde aren’t measured by pounds of bass in the livewell or by “5 good bites.” Rather, outings with the Hall of Fame fishing writer mostly distill down to clicks on a little handheld counting device; following many of Kehde’s daily, 4-hour forays, the clicker rolls to some number of bass and other fish greater than 100.
Dig a little deeper and you discover it’s not unheard of for a single, durable ElaZtech softbait — Kehde’s favorite — to have topped the century mark. According to Kehde, the all-time record was set by one particular 4-inch Z-Man Finesse WormZ, with which he caught 232 fish.
More recently, while testing a TRD HogZ — a relatively new 3-inch finesse bait — Kehde caught 55 bass in 69 minutes — all in frigid 41-degree water. “I mailed the HogZ back to Daniel Nussbaum of Z-Man,” noted Kehde, “after this one bait produced 112 fish. It was still in really good shape.”
The larger truth is Kehde remains chiefly responsible for developing an amazing fishing system his friend and fellow Hall of Fame writer Steve Quinn originally termed the Ned Rig. Though the ultra-finesse presentation runs counter to much of bass fishing’s mainstream, which often prefers beefy rods, stout line and jumbo jig-hooks, the unassuming Ned Rig has almost certainly captured more interest and acclaim by North American bassers than any other presentation in recent memory.
Even so, if you ask the humble Kehde — who isn’t interested in fame or being paid to promote any particular lure or brand — to talk about the origins of the phenomenal lure, he’s likely to defer to names like Chuck Woods and the legendary Guido Hibdon. “Probably less than one in ten anglers knows that Woods designed the Puddle Jumper, as well as the Beetle and Beetle Spin — three classic finesse lures — nor that he also created the first Texas-rigged jigworm.”

In the 1950s, says Kehde, Woods was already fishing a version of the Ned Rig — a soft plastic ‘Beetle’ on a jighead with a spinning rod. “I believe Chuck Woods has probably caught more Kansas largemouth bass than any 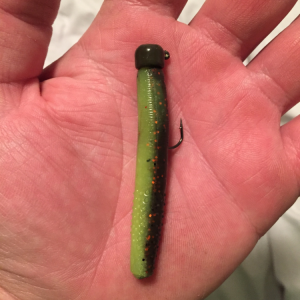 man in history.”
The next big development in the Ned Rig narrative occurred a half century later, the day Kevin VanDam showed Kehde an early ElaZtech bait while fishing together in 2006. VanDam put in Kehde’s hands a pack Strike King Zeros, an ultra-durable stickbait manufactured by the parent company of what would eventually become Z-Man Fishing.
That same year, Kehde fished with Japanese bass legend Shinichi Fukae on Beaver Lake. “Fukae was using the same method we had adopted, retrieving a jigworm a few inches off bottom, reeling and shaking as it went along. It gave further credence to our Midwest style of finesse bassin’.”
Not long afterward, Kehde became a major fan of Z-Man’s unique ElaZtech baits. To this day, his favorite remains a green pumpkin ZinkerZ stickworm, cut in half to 2-1/2-inches, or a single 2-3/4-inch Finesse TRD. Kehde impales both on a 1/16-ounce Gopher Mushroom Head jig or a 1/15-ounce Z-Man Finesse ShroomZ. Interestingly, Kehde cherishes red jigheads, a tip gleaned from finesse expert Fukae.
To give his ElaZtech baits valuable buoyancy, Kehde soaks them in hot water and stretches them. “Or you can let the bass do it for you,” he adds. “The more bass you catch on each bait, the better it gets — the more the fish seem to bite it.
“Removing some of the salt makes the bait more buoyant, giving it a nice subtle glide. The buoyancy is key to our no-feel style of fishing. We can’t exactly explain it, but the more you feel the lure, the fewer bass you’ll catch and vice-versa. With light jigs and small hooks, big hooksets aren’t necessary. A lot of the success in fishing the lure comes down to instinct and intuition. And the fact the bait’s so good, it often does the heavy lifting for you.”

So skilled and potent have Kehde and his loyal Midwest Finesse Network of anglers become at fishing Ned Rigs that the anglers have developed six unique retrieves — all effective, depending on the situation:
The Swim-Glide-Shake: “After the lure touches down, immediately begin shaking the rod, continuing to constantly shake as it sinks toward bottom. Throughout the retrieve, keep the lure swimming slowly from six inches to one foot above bottom. The glide comes in as we stop turning the reel handle and allow the lure to pendulum toward the bottom.”
The Hop-and-Bounce: “Drop the rod to the five-o’clock position after the cast and hold it there. Shake the rod as the lure falls to the bottom. After it touches down, hop it up by rotating the reel handle twice, and then pause. As the lure falls back, we shake the rod. Repeat this cadence throughout the retrieve.”
The Drag-and-Deadstick: “This is normally performed by the angler in the back of the boat; it shines in water up to 12 feet deep. Cast toward the shoreline and shake the rod as the lure sinks. Rod held at 3- or 4-o’clock, the angler drags the lure slowly across bottom as the boat moves along the shoreline. As the boat moves, peel some line off the spool, creating slack and allowing the lure to lie dead-still for five seconds. You can occasionally shake the rod after the deadstick routine.”
The Straight Swim: Primarily executed with a single-tailed grub on a 1/16- or 1/32-ounce jig, this long-cast tactic works with the wind at your back, when bass are foraging on wind-blown shorelines. Depending on wind, hold your rod at 2- to 5-o’clock and simply turn the reel handle at a slow to moderate speed. You can enhance it with shakes and pauses, too.
The Drag-and-Shake: “After we’ve reached bottom, we turn the reel handle just fast enough to get the lure to slowly travel along the bottom. As it does, we twitch our wrist, shaking the rod, line and lure.”
Strolling: “When bass are on massive, featureless flats — especially in winter on flatland reservoirs — we use the trolling motor to move our jigs along bottom, a great ploy for locating schools of fish. The angler on the trolling motor casts to the starboard side at about a 45-degree angle toward the back of the boat. A second angler does the same on the left side, while the person in the back merely casts straight back. When the baits of the two anglers in the front of the boat reach directly behind the boat, they retrieve and re-deploy their original casts.”
Kehde concludes: “It’s the only way I fish anymore. Simple. Affordable. And so dad-gum good at catching boatloads of bass and other species, it’s almost ridiculous.” 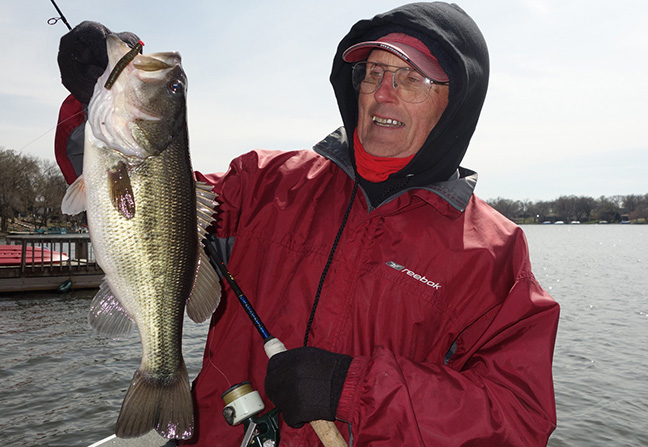