So, I recently had a Fish Sniffer reader reach out to me and ask several questions about trout fishing. I had every intention of publishing it here and then answering him, but I can’t seem to find the message…Hmmm.
As I recall his main question was where do you find trout in lakes during the winter and early spring? That’s a great question so I’m going to share my thoughts….
My first thought is that where you find your trout may be different from where I find mine. I fish the same basic spots from boats and from the bank during the cold-water months.
Now when the water is cold, you can assume that the trout are up on top. I’m not saying there won’t still be fish down deep, but you can count on there being big numbers of trout in the top 25’….
Certainly, if you have a boat you can target some of these fish offshore, but I prefer to fish features that concentrate the fish. The first and most obvious feature is the bank itself.
The bank has a few things going for it…First the sun hitting the shoreline heats up the ground and in turn that warms the water. It might be a slight temperature difference, but it’s enough to attract both trout and baitfish.
Beyond that, if you think about it a lot of the stuff that hits the water eventually drifts to the shoreline. I’m talking about stuff like that soggy inflated worm you tossed into the water when you changed your bait or that big fat moth that crashed into the lake last night when it saw the moon reflected on the lake’s surface.
Trout are opportunists. I’ve cleaned trout with everything from rocks to cigarette butts in their stomachs, so I’m sure one of the reasons they cruise the shoreline is to pick off incidental morsels that just happened to get into the water in addition to baitfish.
Finally, the bank acts as a barrier. At some point a cruising fish is going to run into the shoreline. When it does, there is a very good chance that the fish will turn left or right and continue cruising along the bank. 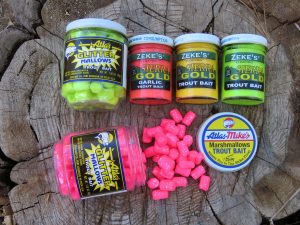 These reasons account for the fact that bank anglers often do better than trollers in the winter and early spring. While your mobility is limited without a boat, the near shore zone is actually easier to fish from the bank than from a boat. That’s why I’ll often opt to put my trolling gear away, beach the boat in some out of the way area and fish from the bank. More about that later….
Now different stretches of the bank have different attributes and some spot are going to be better than others based on the conditions and some spots are high percentage options under most all conditions.
My hands down favorite area to fish is a rocky point that drops into deep water. So much the better if the point is bordered by shallow bays. The point’s tip serves to concentrate fish that are cruising the shoreline. With immediate access to both shallow and deep water, trout are apt to stick around a point so long as there is food nearby.
Creeks seasonal or otherwise are also good bets especially if they enter the lake adjacent to deep water. Shasta has a great many seasonal creeks that dump into deep coves. These can be real hotspots at times for trout, bass and catfish. Such spots offer food, a temperature break and often a clarity break too.
Narrows are often fantastic simply because fish activity is necked down and fish are concentrated. Whenever fish concentrate, it’s easier to hook up.
Classic narrows are like the narrows at Lake Del Valle where the entire lake sucks into an hour glass configuration, but to the discerning eye the mouths of coves often create narrows too. This is especially true in deep water lakes when coves are formed in canyon gullies. If the sides of those gullies pinch in at the right depth you get two nice points and a bottlenecked area that forces the fish into a predictable travel corridor right at the mouth of the cove.
When there is a heavy overcast, shallow flats can be very good for bait anglers and casters, but such areas are typically devoid of life when the sun is out and the surface goes to glass.
Another factor that can concentrate and stimulate trout big time is wind. Points and other structural features that are being battered by breeze and confused choppy water almost always hold fish. It’s not comfortable to fish such a place from either a boat or the bank, but it’s super comfortable for trout. The water is well oxygenated, baitfish and other forage is stirred up and the trout, being predators, use the play of white caps and stained water to move in for the kill.

Honestly when trout are holding tight to the bank trolling is my least favorite approach. To effectively troll near shore areas, you’ve either got to aggressively maneuver the boat in order to get your lures into prime territory, 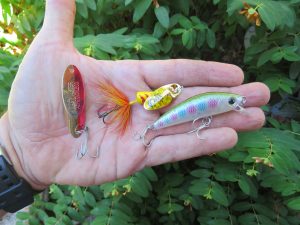 without passing the boat over the fish. Or you can deploy side planers. Using planers adds an extra step to your fishing, but you can steer lures up into very shallow water.
The small planers that you can attach to your line work, but the big mast mounted walleye trolling style planners work better.
Better approaches are to anchor your boat offshore of a key feature and cast to it or beach the boat all together and then fish from the bank.
If I’m casting from the boat I’ll used a combination of lures and bait teamed with slip bobbers. This allows me to work a maximum amount of water at various depths. Minnows (if legal) and worms are the top offerings for teaming with slip bobbers.
When bank fishing I like to arm one rod with a sliding sinker style bait rig. With this rig I experiment with inflated worms, Power Bait, Zeke’s Sierra Gold, salmon eggs and marshmallows in various combinations…In other words, standard baits.
The second rod is my lure rod. Typically, I start out with lures like a Crippler, Roostertail or Yo-Zuri L Minnow and work methodically.
If I’m catching fish on lures I will still keep the bait rod in the water. If bait is working and lures are not I’ll often switch over to two bait rods, however if I have two baits out and the conditions change I’ll switch back to playing with lures. For example, if the wind comes up or if you see fish breaking the surface, you’ll want to see if lures will produce because when the lure bite is on, the strikes can come fast and often.
In closing I’m surprised I don’t see more beached boats when I hit north state reservoirs. Using your boat as transportation to a productive shore fishing area is a great approach. If you take this tactic to a big lake like Shasta or Don Pedro you’ll likely find yourself probing water that is rarely if ever fished with bait.
When you look out across a lake and see those far off isolated points you can rest assure that some of them hold sassy trout that are just waiting to gobble a hunk of rainbow dough bait teamed with a bit of night crawler and a shot of Anise/Krill Pro-Cure! Go get those trout…